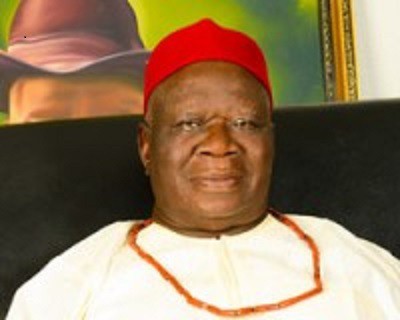 The open letter of Elderstates man and Ijaw leader, Chief Edwin Kiagbodo Clark, to former President Olusegun Obasanjo, yesterday, opened a can of worms in the polity. Eminent Nigerians who reacted to the 10-page letter expressed mixed feelings. While some welcomed the letter others said it was not necessary. There were also those who berated Obasanjo for opening the flood gates of exchange of letters, which they argued portended grave danger for the polity.

In the letter, Clark lampooned Obasanjo over his 18-page letter to President Goodluck Jonathan where he accused the president of being clannish, lying over his re-election ambition, training snipers and listing 1,000 political opponents to be dealt with. Countering, Clark called Obasanjo a liar, hypocrite, unrepentant trouble maker, saying that the Jonathan Administration was not pro-Ijaw.

Call Clark to order – Junaid Mohammed
Northern political commentator, Dr. Junaid Mohammed, yesterday, asked President Goocluck Jonathan to call Ijaw leader, Chief Edwin Clark to order before he plunges the nation into chaos with incendiary language.
Mohammed, who was reacting to the open letter addressed to Obasanjo by Clark, noted with dismay the attempt by Clark to usurp the power of the presidency and act as if he was Nigeria’s President.

According to the Second Republic federal lawmaker, Clark has no locus standi whatsoever to write the letter to Obasanjo since the former head of state did not address his letter to him.

“Obasanjo raised relevant national issues in his letter to Jonathan and did not send it to Clark or made reference to the Ijaw leader. If I may ask, on what basis did Clark write to Obasanjo?

“I find it extremely irresponsible and unbecoming of the likes of Clark to take it upon themselves to insult international leaders like Obasanjo for offering some pieces of advice that Jonathan should have taken quietly with humility and thanked the former president for his admonition,” Mohammed said, adding, “the letter written by Clark to Obasanjo exposes the weakness of President Jonathan’s Presidency and calls to question whether the president or proxies are in charge of the administration.”

Clark has right to  defend Ijaw — Ezeife
Third Republic Governor of Anambra State, Dr. Chukwuemeka Ezeife said: ‘’Anyone who writes should be very sure of what he writes on national issues. It should involve going down memory lane to bring out relevant facts. That is what I think Edwin Clark has done. As a leader of the Ijaw people, he has no choice than to speak out when the Ijaws were mentioned in a manner that he did not find comfortable. He is only trying to put out the fire, since Obasanjo accused the President of being held hostage by his people. It is not good for us to be allowing anybody to be throwing darts at the nation. Such an act reduces the presidency.  Not replying Obasanjo will mean an insult to President Jonathan.

He said: “Obasanjo opened the flood gate of letter writing and he should know that he is not the only one who has a pen in Nigeria. Others who are knowledgeable about the affairs of Nigeria like him are definitely going to comment. I have read through the letter by Chief E.K Clark and I think he has served Obasanjo good measures. I think the time has come for Obasanjo to be unravelled and for him to know who he really is. I give kudos to Clark for that wonderful letter.”

Elder Statesman and founding member of the Arewa Consultative Forum, ACF, Alhaji Tanko Yakassi said that former President Obasanjo should be blamed because he started the open letters that seems to be heating up the polity.

Arguing that  Obasanjo  provoked the Ijaw people in his letter to Jonathan, he said the former president should have sought audience with the President instead of resorting to writing an open letter.

He advised Obasanjo to defend himself on the allegations against him in Chief Clark’s letter, saying: “I think it is expected because of the way General Obasanjo provoked all the Ijaws in writing his letter to the President. I think every Ijaw man is entitled to feel offended. It is none of their business but they were provoked. The contents are natural, allegations have been made, I think it is up to General Obasanjo to confirm or to deny. The responsibility for the heating up of the polity is that of Obasanjo, he should have sought to meet with the President instead of the open letter.”

A terrible wind is blowing –Ikokwu

Second Republic politician and one of the founding members of the Peoples Democratic Party, (PDP), Chief Guy Ikokwu, concurred that Obasanjo should not have written an open letter to President Jonathan because he also had his shortcomings.

His words: “Obasanjo was living in a glass house. The proverb says he who lives in  a glass house should not throw stones. But Obasanjo has been throwing stones right from the civil war till date and it has become habitual. If you throw stones at people who live in the same house with you, they will find a way to retaliate. So, it is not surprising that his daughter, Iyabo Obasanjo reacted and now Clark is reacting.

“Obasanjo is having serious problems answering or rebutting the issues that have come up from these letters. A terrible wind is blowing and where and how it will end is not certain. Altogether, Obasanjo has ruled the country for about 12 years. He should have used the opportunity to transform Nigeria but he failed.”

President of Aka-Ikenga, an Igbo intellectual think tank group called for stoppage of the exchange of open letters to enable President Jonathan concentrate on governance.

His words: “Chief Clark’s letter is one in a set of letters. Many of us were not happy with Chief Obasanjo’s open letter because it was bound to open floodgate of letter exchanges, which will not be about the nation but individuals. Clark and Obasanjo were ministers under General Yakubu Gowon. They are not strangers to themselves so Clark has the right to write Obasanjo. However, these letter writings should stop; let us allow the president to lead the country.”

Asked his view on Clark’s letter, Hon. Arua Arunsi, (PDP, Ohafia/Arochukwu Federal Constituency, Abia), said: “I don’t agree that Obasanjo is a trouble maker but I can say he is a confusionist. He wants to bring confusion to this country by writing such letter to the present Head of State. When he was there, nobody wrote him that kind of letter but he keeps writing to others. To me, he is a confusionist. And as a statesman, that is not good for him. When I made my reactions last time, I said that Obasanjo told lies because you cannot talk about the economy being in shambles when this economy is growing at seven percent while his grew at three percent. So, in this case, that was a lie. That wasn’t the truth. So, if Edwin Clark calls him a liar, well, to some extent, that may be correct. Yes, I may not see him as a trouble maker, but as a confusionist. He wants to bring confusion to the governance of this nation. Ordinarily, what he wrote as an open letter could have been an advice even personally.”

Clark is not helping Jonathan –Mbadiwe

“ My reaction is that Chief Edwin Clark is not helping the President at all. I think he should keep silent and let time heal the wounds. I am not sure that making all these comments will help the matter in any way.”