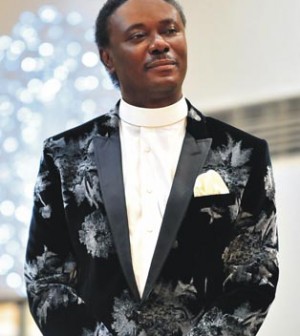 Dear Pastor, happy New Year to you and your fold, it’s a waste of time to bother about how you are because a sick soul can’t contemplate contesting for a public seat.

It wouldn’t have been necessary for me to write you sir, over the years I’ve had my reservations about you but the fact that I saw posters of your 2015 presidential ambitions made it obvious that you need some home truths since the people surrounding you have failed to do it.

First and foremost I need to make you understand that I’m a Christian like you, a Pentecostal one for that matter. I am not in any position to question your call or ministry. This isn’t in any way an attack on your church but a few questions on your person; I’m one of those that believe that men of God must step into the politics of Nigeria to make the difference we all aspire, but what type of pastor are we talking about?

First time you came out to contest in 2003 you said it was God’s leading, you said God told you in a revelation that you’ll be Nigeria’s next president, we all know that God has a way of using the wrong people: Moses was a murderer and a stammerer, David an adulterer, Paul a staunch persecutor of the brethren and so on like that so we gave you the benefit of doubt, nobody questioned you then because we knew it was a matter of seeing the election results to know whatssap. Can you remember your position in that election? You were woeful, why were you trying to coin and con us with God’s name? The God you and I serve never fails, His word is yea and amen, he will never lie; you are a citizen of Nigeria, you’re qualified by age, academic and other cheap INEC stipulations, why don’t you just go to the polls with your manifesto and leave us to decide instead of attaching God’s call? Now have you considered the implication of your woeful failures on the Christians out there? You know how many are now confused because a certain pastor portrayed God as a liar? How do you think your congregation members see you? Fill in the gap.

Presently we have a president who can’t contain the excesses of his wife or how do you explain how her name has refused to stop surfacing each time there’s an uproar in Rivers state? And here you are, unable to keep a woman for a sustainable period of time coming out to ask for our votes HELL NO! Not again, it’s your private life and it’s not my business but a man that can’t keep a woman under his roof for a sustainable period of time isn’t fit to be our president.

Very recently you flashed some beautiful cars and trust bloggers, they quickly gave us an estimate of about 120m Naira! Wow! I am not one of those that believe that pastors should be poor but where is moderation in your style? You’ll certainly be quick to ask if I wouldn’t buy such if I had the money but sir who am I and who are you? I’m a random young man with just a few people looking up to me, you’re a minister of God with sea of people looking up to you, reading you as a bible and setting you as a standard; what message were you trying to pass? Coincidentally it was about the same time several circular artistes were acquiring same toys, can we say you were trying to compete? From the political angle, we’ve tried someone that had no shoes but right now he’s currently on a billion naira food a year at Aso rock villa, what would you do with our money if you ever become president when you already expend so much on luxuries before hitting Aso rock? Just asking.

Just a couple of days ago you came out publicly to attack the Catholic arm of Christianity, labeling them as occults and saying they’ll go to hell. LOL who are you to judge? What favours have you done yourself by confusing people even further? How many Christians (Catholics) have you subjected to insults and exposed to non-believers’ scrutiny because of this wayward utterance? What were you trying to achieve? Lose more souls to the devil or what? Why not channel your energy towards swelling God’s kingdom instead of tearing it apart with your needless grandiloquence? In a country where we have enough of religious sentiments culminating into terrorist attacks, trust me pastor the last thing we need is an acrimonious president.

I’m a very positive person and I believe strongly that impossibility is nothing but it’s easier for Portsmouth to win the UEFA champions league than for you to be our president. Within you I’m pretty sure you know if you truly come out again you’re fighting to lose so why drag the office you hold in the house of God into murky waters? I’m well aware of the billions of naira that goes into every political party that contests an election, my dear pastor, is this what you’re after? How would you be seen if you’re eventually defeated the third time? How would you encourage your congregation to keep the faith with a failing pastor? Your confidence is laudable, but seek first for yourself and congregation the kingdom of God, and let God add the rest as He’s promised. I miss your classic gospel music, maybe you should revisit that part of you. If I’m ever stranded in Ikeja on a Sunday and nearby churches are filled to the brim and I’m fortunate to have a dictionary with me I’ll step into your church to fellowship. I do hope you listen and quit this futile political adventure, your congregation needs your attention, Nigeria needs your prayers not your judgments. I wish you an amazing 2014.

Views expressed are that of the author and do not necessarily represent the views of Omojuwa.com nor its associates