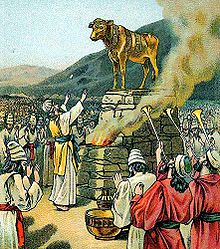 You know how you briefly read those parts of the bible about Ark, Tabernacle, Lampstand, Burnt Offering and so on without paying very close attention like that and you wonder what their usefulness is; (those parts are boring, even if you are the best scripture ‘quoter’, I bet you can’t quote those parts); they were obviously not boring in those days; I can’t really figure out their usefulness except that history is important and should be known. Whereas, some other part of the Old Testament (like the one below) has a lot of significance and lessons to be learnt from them are almost endless…

Nah, there is no way I could have survived back then in the Old Testament days; I mean, no computers, meager technology of chariots, indiscriminate killing of animals (eww, I can’t stand blood), any small thing like this, death penalty ni straight; lots of principles then; you either do this or you are stoned to death and to top it, manner dropping down from heaven at odd hours of the day; they just believed everything they saw then; things that have never happened before (as if they were all sorcerers). If I were alive in those days, who knows, I might have been an activist; campaigning against miracles.

The Israelites saw and forgot; their lives played like a movie; they see miracles, they become happy, they rejoice and then they forget; they sin, God gets angry and He punishes them, they repent, God calms down, he forgives them then the whole process is repeated again; these continued for years till they went into exile. We can as well say the Israelites just wanted to get to the promise land (well, it was more than that) so they can boast of their own land too; they had no intention of serving God. Aaron (‘the priest’) was so creative; whoever thought a golden calf (‘the god’) could be made out of necklaces and earrings? He could have stood out and disagree with the people while waiting for Moses. Unfortunately the people fell and three thousand of them were slaughtered for sinning against God (3000? thank God for grace in this present day). God never ceased referring to them as ‘stiffed-necked’ people because they kept returning to their vomits and Moses never got tired of pleading on their behalf; he never stopped reminding God that they were his people and about the promises he made to their forefathers. Israel is a practical example that confirms God doesn’t go back on his words. Has he said it, will he not do it? Many times God wanted to destroy this people but he had promises to keep. Ordinarily, this should be my last paragraph; I just wanted to review some bible pages and tell you what is going on in it; but… kindly read the last paragraph.

To cut the long story short, I don’t think there is much difference between our behaviors now compared to theirs; as religious as we may think we are, we go back to our vomits a times; they sinned, we sin, they repented, we repent also; life goes on. Anyway, out of the various lessons you can pull out from this story, I emphatically want to point out the ‘God’s emotion part. If truly anger is an emotional something, then our God is an emotional God too. He gets angry and FYI he has a sense of humor too. (LOL; Yes, he created some of those funny human beings nau); and He has feelings too; the Bible says he is a jealous God; (if you have ever gotten jealous, you’ll know what it means when they say someone is jealous). Unfortunately, we humans are very good at hurting feelings. Countless number of times we have hurt God’s feelings and all He could do was wait for us to apologize and even if you don’t, he might consider forgiving you; some of us don’t even apologize, we just go to him to ask what we want and in his faithfulness he provides. (If you have ever been hurt, you should understand better). I close by saying: Thank God sey man no be God. Do justice to whatever it is you’re thinking cos out of it flow issues of life and relent from hurting people’s feeling; talk less of God’s. –