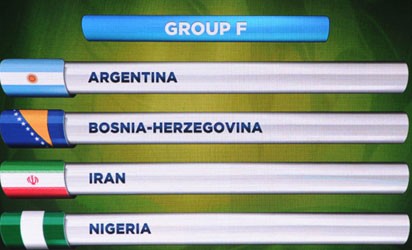 Two key phrases rule sports draws all over the world. The first is what is called “The luck of the draw” while the other is “group of death “

The direct meaning of the first contention is that there is a possibility of a team having the “luck” of finding itself in a group that it can easily top or come out from, depending on the perceived quality of its components.

The second assumption is that the group is peopled by teams believed tough and it will take a war, a battle of survival to be able to triumph therein.

Having said this much, we can understand why some of us insisted and prayed for a “favourable” draw for the Eagles, one that they will be able to maze through on the way to tougher successive rounds.

I wondered, for instance why anybody will want to play Brazil in Brazil in the very first round of the competition. With due respect to quality and the availability of players in her ranks, why will any coach wish for a confrontation against Germany, Spain and so called power houses of football, so early in the day?

With the draw that has been handed to us, even the luck of the pairings, by the time we have played Iran and Bosnia we will be READY to play Argentina and go for broke.

I was reminded by my son that four years ago, that is how I celebrated the draw that put Nigeria in the same group with Argentina, South Korea and Greece and concluded that Argentina and the Super Eagles were going to progress in that order, yet we ended up drawing only one match and came out last in the group.

Yes, I like to be reminded, that is why I have not suggested that this is a WEAK group. I have conveniently called it a FAVOURABLE GROUP.

I want to believe that between now and when the world cup starts, the Technical Department and the Technical Committee of the NFF will start work immediately to put at the disposal of the Keshi led technical crew all the information, logistics and player by player profile on Argentina, Iran and Bosnia. By now we should be able to know how these teams qualified for the world cup, their strengths and weaknesses and the depth of individual players.

As you are reading this, Coach Keshi would have taken a decision on the friendly matches he wants to play, those teams and countries that have similar playing patterns and cultures with the teams in our group.

By the time coach Keshi receives the files containing all the information on our opponents, he should be able to monitor ALL the players in their clubs and national teams. In other words if Argentina plays a friendly match today, Keshi MUST endeavour to be present, just as he will be interested in the form and progress of Argentine players in their different clubs, ditto Iran and Bosnia players.

The minutest detail are taken into consideration, to the point where the Eagles goalkeeper trainer will want to know who takes the opposition penalties and in what pattern over the last two and three years.

This is what the other teams will be doing against us and we cannot feign ignorance. This is what draws are all about, the opportunity to plan as the days tick by.

What about training camp venue and the availability of necessary infrastructure? During the FIFA World Cup in France in 1998, as FIFA Media Officer I had accompanied the General Coordinator in Marseille to go and visit the German team in their camp. A detention facility could not have been better fortified. When we finally got in, we met the team in a two hour training regime in a swimming pool. Yes swimming pool.

We also visited the gym that was laid out for the team and we were told by some of the physical trainers that the maximum days they train with the ball in a week is four days. That set me thinking, that “training” IS NOT eleven a side or the running round the field eleven times before the players settle down to play “ “probables” against “possibles

Football is a science, where even the rooming policy is consciously decided as an off the field strategy to help cohesion on the field of play.

With Friday’s draw, the qualification party has been brought to an end. The competition is now here with us. For us to go to Brazil and not do better than the four previous qualifications will amount to an anti climax.

The Aminu Maigari led NFF must therefore do all in their power to liaise with government with a view to extending full support to the team to succeed. This is the time to sit down and talk bonuses and allowances. This is the time to decide on and thrash out all those components that have in the past impacted negatively on our success.

Akin to the rites of Christian marriage, Maigari should now address   the Nigerian football community and ask   if there is any one that feels he has anything against Nigeria winning the cup! If so, let him or her speak now or forever remain silent …….because we will not tolerate any distraction from any level.