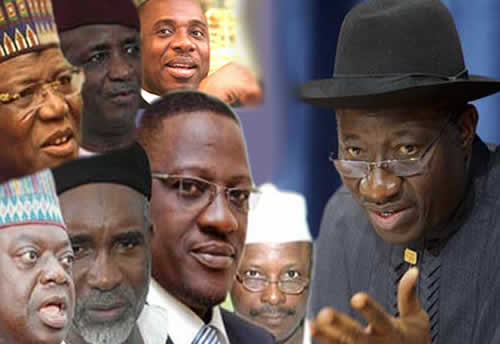 Maybe the question should have been what would the APC have done?

The hand writing’s been on the wall. It was evident the PDP had crisis and there was no way back. There was no remedying the situation. There were efforts to mend fences all to no avail. Elder states man after Elder statesman was called to intervene; there were meetings after meetings and all came to nothing.

The last straw according to the new PDP was the refusal by the president to see them after he came back from his recent trip. This, according to them showed they were no longer needed in the folds of the PDP. Perhaps they wanted back in, but the body language of the PDP confirmed to them they were no longer needed in their fold.  They had to make a move or else be dead politically, hence the merger with the APC.

Since the APC accommodated the rebels from the PDP  it has been getting knocks from almost everywhere. The same lots that have keep us where we are since 1999?

Let me just make something clear, I do not hold forth for the APC whatsoever, all I care about is good of the suffering masses. In fact I was one of those that criticized the APC for frolicking with some elements. They were supposed to be progressives(at least in name) and mixing or is it wooing progressives not some questionable characters. We want change, not same of the same .With their moves I thought they just were not out for the good of the masses. I thought they were being selfish as usual.Their act, I thought, was just sheer desperation. With their act, I thought they just wanted power for the sake of it and not necessarily to change anything that concerns the ordinary man.

But then again with the nPDP members rejected, banished, cast away, being treated as lepers and on the brink being politically finished, where would they have gone? The PDP has confirmed they were good riddance to bad rubbish after the merger. This shows they were not wanted in the PDP in the first place.

Me thinks the new PDP members were left with no choice, just like the APC had no choice but to bring them into their fold, if nothing else for their experience. Would you, as an employer of labour reject the offer to have someone from your competitor, as your staff just because your competitor does not provide quality service? Would you pass by the chance of having someone with the experience? Is it not to your advantage that you have someone with that experience UNDER you? Is that guy not coming to work for you under your terms and conditions? It is your duty to make him conform to your belief. He has to play by your rules, simple!

The APC, is of course not daft enough to allow some guys just come in and hijack what they have built. If they are, then they do not deserve to be in government in the first place. I think the APC is doing these guys a favor and so, they (from the nPDP) would not have a choice but to play by the rules of the APC.

The question now should be, what the APC has in stock for the suffering masses. Does it have a plan that is favorable to the masses? Does it have a different thing to offer us apart from what we have had for the 14 years?  What is their stance on corruption-a scourge that has almost killed us?  At the moment nothing seems to be working.  Is the APC ready and willing to put back smiles on the faces of ordinary Nigerians?  Is the APC serious about changing the lives of the ordinary people? The APC manifesto focuses on power, security, corruption, electoral reforms and the economy. Is the APC just talking? We are not just talking about promises as is the norm here; we are talking about promising as well as doing as promised. Is the APC ready to present to us capable and sound minds with burning desire to change this country? Is the APC ready to do away with zoning and all that nonsense that make for jokers to be elected into offices? Is the APC genuine? We have believed fake promises in the past and they all have failed us.

All Nigerians care about at the moment is a better life. We have had enough.

The president however can still turn this around, merger or no merger.

The president, I think should see this as a chance to get down to work and make some positive impact on Nigerians. There is a year before 2015.

See ehn, I don’t really think Nigerians will give a plop about merger of any sorts if the standard of living is improved in the president’s time. I do not think it is too late for him. This can be remedied only if, he can just take this chance and focus on making Nigeria a better place. Make change we can feel (add that to the power of incumbency) and believe me he is in with a glorious chance. I still do not think 2 years is not enough to give us positive signs. It is totally up to the president.

If the President does not take this chance and make a positive impact on our lives and the APC guarantees us smiles come 2015,why not?

All I want is change from the status quo. I want all the good things of life that I have never ever been used to. You nko?