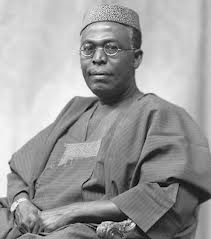 In the context of impermanence, it was always logical to contemplate, if not envision, the decline, if not the demise of the socio-political philosophy of the legendary Chief Obafemi Awolowo, on account of which he earned die-hard loyalists as well as unrepentant adversaries. It would appear that the inevitable dawn of new realities is already here, with the uncreative but calculating redefinition of progressivism implied by the cohabitation of varied political impulses under the banner of the recently realised All Progressives Congress (APC).

The party’s unlikely emergence, following the merger of the Action Congress of Nigeria (ACN), the Congress for Progressive Change (CPC), the All Nigeria Peoples Party (ANPP), and the absorption of a faction of the All Progressives Grand Alliance (APGA), which was complicated enough, has been compounded by the noisy addition of five state governors from the country’s ruling People’s Democratic Party (PDP). There is no doubt that the entry of Rotimi Amaechi (Rivers), Rabiu Kwankwaso (Kano), Murtala Nyako (Adamawa), Abdulfatah Ahmed (Kwara) and Aliyu Wamakko ( Sokoto), particularly because of their political background and the contentious circumstances of their disengagement from the PDP, will most probably further deepen the difficulty of identity for their new party.

It is indisputable that a major constituent of the party, the defunct ACN, whether consciously or subliminally, operated with a sense of awe-inspiring canonisation of Awolowo, a tendency that the others did not necessarily embrace. Interestingly, therefore, while the leadership of the Southwest states controlled by this component of the party religiously invokes the spirit of Awolowo, who died in1987 aged 78, like some mantra that projects a specific desirable governmental orientation, the others do not essentially share such mindset. Indeed, the concept of Awoism, which more or less defines good governance in the ex-ACN circle, is not interpreted in the same terms by the others.

It is an intriguing measure of the Awolowo mystique and influence that in certain quarters the belief in Awoism, or the branding as an Awoist, is regarded as a prerequisite for political leadership in the Southwest. It is precisely this fallacy that informed the paradoxically corroborative defence of Osun State Governor, Rauf Aregbesola, in an article entitled “Aregbesola, Awoist and Awoism”, written by Prof Moses Akinola Makinde, the DG/CEO, Awolowo Centre for Philosophy, Ideology and Good Governance, Osogbo, which was established by his administration. Makinde, perhaps unwittingly, advanced the same misleading notion, saying, “Surely, if there is any politician who may be seen as an Awo incarnate in his Philosophy, Ideology and art of Good Governance, it is Aregbesola.”

The question is: Must Aregbesola of necessity be an Awoist, or practise Awoism, to actualise exemplary governance? If the answer is negative, then it amounts to rather unproductive labour to make arguments to prove that the governor is indeed of such persuasion. Without discounting the reported achievements of his three-year-old administration and the wide social approval he allegedly enjoys, does the fact that Aregbesola unapologetically hero-worships Awolowo make him ipso facto better equipped for positive leadership? To believe in and even promote such a tenuous link not only amounts to mystification of administration; it also unfairly discredits the possible personal brilliance of the governor, removed from any influence of Awolowo.

The obsessional focus on Awoism, which Makinde describes as “the totality of the doctrines of Chief Obafemi Awolowo in thought, words and deeds,” apparently belongs to a past era, and may be inapt within the framework of changed actuality. It is, for instance, difficult to imagine the grand Awolowo in a road show designed to more or less beg rebellious governors in a rival party to join his group, which was the approach adopted by the APC leadership. Also, it is improbable that the fastidious Awolowo would have been impressed that in the perception of Amaechi, for instance, former president Olusegun Obasanjo and ex-military ruler Ibrahim Babangida are political heroes, contrary to their low ranking in public estimation. In an interview which touched on his idols, Amaechi said of Obasanjo, “He has a God complex. What I mean by God complex is the Messianic complex. He thinks he wants to save the country.” Then on Babangida: “very suave, very intelligent, a true politician that ordinarily he shouldn’t be a military head of state.” These descriptions are revealing of the shades of political consciousness harboured by the APC, and signal a corruption of its Awoist content.

It is significant that Makinde, in an elaboration of Awolowo’s values, emphasised that “The philosophical foundation of Awoism is the doctrine of mental magnitude.” Awolowo truly demonstrated uncommon concentration on the improvement of the mind as an invaluable training for leadership, particularly by his deep writings on his socio-political thoughts intended as illuminating guides on the subject of good governance in a pluralistic society. He was popularly and rightly regarded as a “philosopher king” and “sage”, which underscored his towering intellect employed in the context of political administration. Tragically, the important connection between cerebral acuity and forward-looking people-oriented governmental policies, particularly in the areas of education, health and infrastructure, which he reflected, is today generally less appreciated among the political players, especially with the reign of “negative emotions” that inspire basic personal aggrandisement.

Another central point of departure has to do with Awolowo’s stature as the soul of the political parties he originated, namely, the Action Group (AG) and the Unity Party of Nigeria (UPN), in which he commanded overwhelming authority. Current realities, specifically in connection with the APC, but also in general, suggest that the kind of vice-like grip he had on party affairs belongs to a bygone age.

Additionally, in character and lifestyle, his sometimes impolitic directness, informed by well- meaning sincerity, as well as his Spartan existence, despite his means, placed him in an inimitable class. The doublespeak associated with characters in politics did not have an accommodation with him, and the people knew where he stood on issues, even when this worked against him. Fascinatingly, he lived above fleshly indulgence, and was not a materialistic exhibitionist, contrary to the ways of many who govern today.

Perhaps the greatest charge against him, even among his followers, was his principled inflexibility and customary conviction about his correctness, which his political foes often interpreted as haughtiness. Ironically, his supreme moment came at his death with the outpouring of flattering tributes from friendly and hostile quarters, especially the one which eloquently described him as “the best president Nigeria never had.”

In the final analysis, it remains to be seen just how effectively the two institutions established to promote his ideals, incidentally by state governments, the Obafemi Awolowo Institute of Government and Public Policy, Lagos, and the Awolowo Centre for Philosophy, Ideology and Good Governance, Osogbo, will perform in safeguarding Awoism.