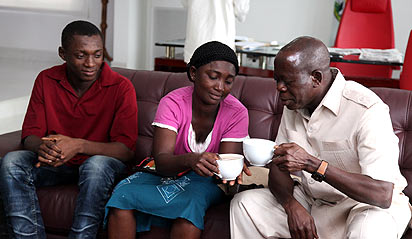 Whatever is the beef between the Edo State governor, Comrade Adams Oshiomhole and his one time buddy and chairman of the state chapter of the Peoples Democratic Party, PDP, Chief Dan Orbih cannot be easily fathomed. But beyond the political excitement in the repeated sucker punches from Orbih is the element of constructive opposition. Or is it not?

Very few Nigerians, nay those in government, would apologise for a misdeed as Governor Adams Oshiomhole of Edo State did last weekend.

The governor who has been celebrated for his unparalleled accomplishments in infrastructure development in the state, however, soured his reputation recently when he disdainfully put down a woman who allegedly violated the provisions against street trading in Benin City.

The governor had in a fit of anger dismissed the woman, Mrs. Joy Ifijeh who claimed to be a widow, telling her to “go and die.”

The words were caught on camera and one of such recordings landed in the hands of the state PDP chairman, Chief Dan Orbih who apparently, loaded it on the internet.

Orbih from the same Etsako stock as the governor, was by some accounts once a very close buddy of Oshiomhole with a relationship that extended to the exchange of holiday visits between the two families.

However, whatever it is that divided them remains a secret between the two men who despite their public feuds, still chat like buddies whenever they meet like during penultimate weekend’s burial of Admiral Mike Akhigbe.

Such pretence between the Etsako brothers underpins the biblical reference that a man’s foes are members of his household. Indeed, for Oshiomhole, Orbih has become more than an ordinary foe, becoming perhaps the greatest danger to the political and development legacies that have been central to the Oshiomhole phenomenon in Edo State.

Did Orbih take advantage of the widow in Benin to traumatize Oshiomhole?

Whatever, Oshiomhole’s apology was unprecedented from a government official and was out of context from the pattern of unparalleled arrogance that is characteristic with government officials who have openly traumatized the citizenry with their misdemeanours.

Before Oshiomhole’s apology, Orbih had last Friday issued a public statement where he disclosed the PDP’s decision to institutionalize an endowment fund for widows he claimed were suffering under the weight of what he claimed to be misrule in Edo State.

“The governor’s actions are appalling, insensate, disgraceful, indecent, cruel and below board. It is clear that he does not care much about the well being of the people as he pretentiously avowed,” Orbih said.

“Our hearts go to that hapless widow in this her time of travails and through her, to other widows who have been oppressed by the unfriendly policies of the administration in Edo State.”

Pledging that “the PDP, Edo State will not let any Edo person ‘to go and die’ if it can help it,” Orbih in the statement said:“our party has instituted an endowment fund for all widows and oppressed people in the state and by this release, we invite the widow captured in the video of the encounter with Governor Oshiomhole to come to the PDP Secretariat on No. 70, Sapele Road, at 11am on Tuesday December 3, 2013 to receive a first-installment sum of N250,000.00 to cushion the pain, trauma and loss occasioned by her mistreatment and the seizure of the items she sells.”

Whether Orbih was taking opportunity of the widow’s distress to score another political point or not, aides and associates of the governor, perhaps were able to make the comrade governor after about two weeks to reflect on his assertion, causing him to make the unprecedented apology.

“Last week, I had an encounter with a young lady at Oba Ovonramwen Square by Mission Road. She was trading on the road and too many people have been doing this. They block the road with their wares. Part of the problem of Benin before now is that it is so difficult to drive round the City.

“But you find some of our women; they just convert the road to trading post. For years we have been sermonizing. I came across this young lady who chose to put her wares right on the road thereby creating blockade and obstruction. We are all human and in my anger I said to her, how would you be doing this?  I asked them to confiscate her wares”, he said.

Explaining further, Oshiomhole said: “She told me ‘I am a widow’ and I said if you are a widow must you do things that would make other women widows. By this obstruction you have caused, you could cause accident. You could actually get knocked down.

“In the process I probably said something that I should not have said. I want to say that I do appreciate that I come from a very poor background. I understand the pains of the poor. We also need to be careful so that the poor do not create more problems. Just to say to our women that I regret having said what I said to her,” the Edo governor said to the delegation.

But whether the governor has made a personal apology to the woman has also become an issue.

Told of the governor’s unprecedented action in making an apology, Orbih was unmoved saying that the apology flowed from the PDP’s crusade on behalf of the woman.

Orbih disclosed yesterday that the PDP was going ahead with the scheduled launch of the endowment fund for the widow and other widows who according to him, have suffered under the Oshiomhole regime.

He spoke before Oshiomhole in a dramatic move had breakfast with the woman yesterday during which he offered her N2 million and an automatic employment.

Again, the governor made a direct apology to the woman saying:“when you put your things on the road a vehicle can run into you and they have killed some people like that and that was why I said if you are a widow do you want more people to be widowed? But when I said go and die, that one was said in a fit of anger. And I am really sorry”, he said.

Whatever, the governor has apologized and something positive has come out from the criticism of Edo PDP.

The state PDP had in the past also brought the Oshiomhole government to scrutiny in several other areas of governance and most recently, in the public campaign to stop the sale of Edo House in Lagos.

In that particular engagement, the PDP sought to prove using facts and figures that the Edo House would be better off left in the hands of the state government than being sold.

The engagements between the Edo State PDP and the Oshiomhole government have undoubtedly resonated for the good of the citizenry like Mrs. Ifijeh in Edo State. Oshiomhole is as such constantly on the watch knowing that any little slip, that Orbih is there.

It is only a pity that the situation is quite different in many other states where the administration and opposition officials have resorted to a cozy habitation of tolerance. In such cases, it is the citizenry that lose out. But not in Edo where Orbih puts Oshiomhole on his toes and the result would in the end translate for the good of the people of Edo State.