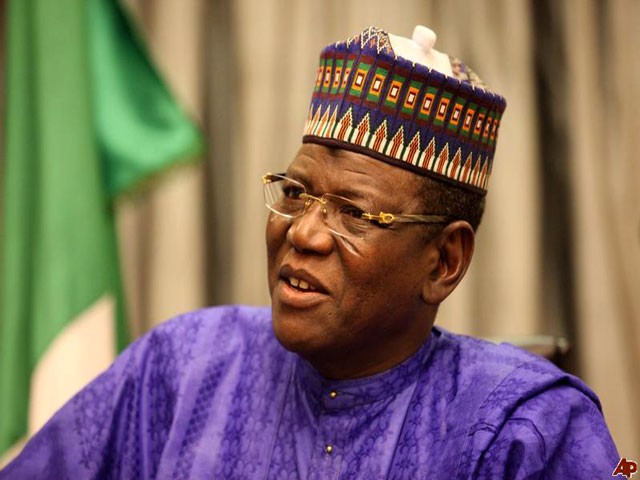 Last month, on November 15, to be specific, President Goodluck Jonathan took a direct shot across the bows of Governor Sule Lamido’s ship in an apparent warning to the governor to reconsider his long running confrontation with the president over the 2015 presidential elections in which both have staked their claims. On that day, two sons of the governor, Mustapha and Aminu, were picked up by the Economic and Financial Crimes Commission (EFCC), for allegedly laundering over N10 billion through several banks in which the state holds major accounts.

Officially, the EFFC does not take orders from the president – or from anyone else for that matter. But this is only in theory. In practice it soon became notorious under President Olusegun Obasanjo, President Jonathan’s seemingly estranged benefactor who created it ostensibly to fight corruption in high places, as his battle tank for squaring and squashing opposition elements in and out of the ruling Peoples Democratic Party.

As a good student of his erstwhile godfather it seems President Jonathan has since learnt to put the commission to good use in self-service, all in the name of fighting corruption. Ask Governor Rotimi Amaechi of Rivers State and former governor, Timipre Sylva, of the president’s home state, Bayelsa, both of whom have attracted the president’s great disaffection. Governor Lamido is thus only the latest among several of those to have attracted EFCC’s attention more for their politics than for mis-governance.

Lamido’s offence, it seems, is not only his expression of interest in the presidency. Recently, he suggested in an interview with an Abuja based radio station, Vision FM, that the president protected a corrupt minister by refusing to act on information he gave the president that the minister had collected a $250 million bribe from an oil firm. This provoked an angry retort from the president who, through his spokesman, Dr. Reuben Abati, said the governor’s allegation was “patently bogus” and “an unacceptable and callous attempt to unjustly impugn the integrity of President Jonathan and cast aspersions on the seriousness of his administration’s efforts to curb corruption.”

EFCC’s picking up of the governor’s sons last month was clearly an attempt to demonstrate to the world that the governor was going to equity with very dirty hands.

That EFCC’s action was triggered more by politics than by any concern of the president about corruption will be obvious presently. Before examining the facts, however, I should make it clear that this is not in defence of the governor against the allegation of using his sons to defraud his state.

Jigawa, as we all know, was created in 1991. Between then and now it has had seven governors, four military and three civilians. Sandwiched between the first two military governors, one under General Ibrahim Babangida who created the state and the other under General Sani Abacha who threw out Babangida’s transition government of Chief Ernest Sonekan in November 1993, Governor Ali Sa’ad Birnin Kudu, its first civilian governor, did not enjoy much resources nor had much time nor much room for initiative to make a significant difference in the state.

The next civilian governor, Ibrahim Saminu Turaki, did enjoy all three factors: less than two years into the fully-fledged civilian dispensation under President Obasanjo, oil money, which the country’s treasury has depended heavily upon for its revenue, became no longer an object, as oil price soared through the sky; the governor had eight years to transform the state with the state’s statutory allocation; and as civilian governor he was, at least in theory, a co-ordinate, rather than a subordinate, of the big man at the centre in the governance of the country.

As we all know, Turaki, like so many of the governors during the first eight years of the current civilian dispensation, was a disaster. The man, as we all know, hardly sat at home to work. Instead, he spent so much time globetrotting he could not make any significant impact on his state. And, as he himself testified in the course of his yet to be concluded long running prosecution by the EFCC, he used a considerable portion of his revenue allocation, under duress he said, to help fund President Obasanjo’s infamous Third Term agenda.

Enter Sule Lamido in 2007. Anyone who had been to the state since then, as I have, would agree that the difference between Jigawa before Turaki and Jigawa under Lamido is the difference between night and day. Dutse, the state’s sleepy capital, for example, has since become home to its civil servants who, before Lamido, used to go to work daily from Kano. And except, of course, they never meant what they said, all very important visitors to the state, including President Jonathan, have had only praise for the way the governor has vastly transformed its infrastructure in education, housing, health and road network, among others.

So even if in the end it turns out that the governor used his sons to steal from his state, at least he has some mitigating circumstances for his alleged action. This much, I am afraid, cannot be said of many states in the country, including the president’s home state, Bayelsa, where incredibly huge gaps exist between the levels of development and the resources that have accrued to those states.

This does not, of course, mean Lamido’s sons should not be prosecuted and their father exposed as someone who preaches what he does not practice. By all means prosecute them if you have a prima facie case against them and expose their father as a hypocrite if you can prove it.

What, however, Lamido’s almost universally acclaimed performance means is that there are many, many, many more deserving cases for EFCC’s attention than the governor’s. Anyone with even the most casual acquaintance with Nigeria’s political-economy can reel off at least a dozen such cases before you can say the C word. But the three examples that follow are enough to prove the fact that Lamido’s case is by far more politics than about the president’s concern for good governance and transparency.

Easily the most glaring of such cases is that of Malabu Oil and Gas, reportedly controlled by Chief Dan Etete, a former Oil minister under General Abacha. According to several newspapers, including The Economist (June 15) of London, two years ago, a consortium of Shell and Eni/Elf which had controversial stakes in the oil well, OPL 245, paid nearly $1.1 billion to Malabu, reportedly on orders of the president, as settlement over a long running dispute with Malabu on the ownership of the lucrative oil well.

The payment was made to Malabu against the background of the fact that Etete had been a fugitive from France convicted in the country for money laundering in 2007 – a conviction upheld in 2009, following his appeal. The payment was also made against the background of the fact that EFCC was yet to conclude its investigation of an allegation that Etete had fraudulently acquired the company.

According to Premium Times (September 30), an investigative online newspaper, the former minister, in turn shared the money paid to his company into several dubious accounts, some of them owned by close political associates of the president’s.

Clearly this payment, which the Minister of Justice and Attorney General of the Federation, Mohammed Bello Adoke, tried to rationalise away during a public hearing of a House committee investigating the deal, as voluntary with government acting only as an “obligor” and “facilitator”, reeked to high heavens of the worst form of cronyism, to put it mildly. Even more clearly Lamido’s N10 billion alleged corruption pales into insignificance compared to Malabu’s $1.1 billion, which comes to nearly N184 billion.

Second, there was an earlier case of the president versus a publication called Spynet Magazine. In its maiden edition in August 2007, it accused him of perjury in declaring his assets and liabilities during his tenure as deputy governor and governor of Bayelsa, and eventually as vice-president under Umaru Musa Yar’Adua, as demanded by the Constitution. Days after the publication its premises were ransacked by the State Security Services and its editors detained. To date nothing more has been heard of the case. Not even after the president has angrily told the public, following persistent demands that he declares his assets and liabilities publicly as was done by his predecessor even though the Constitution does not demand such public declaration, that he doesn’t “give a damn” what the public thought of his refusal to do so.

Finally, there is the case of the paradox of worsening insecurity in the land, especially from Boko Haram insurgency, in the face of the huge budgetary allocation to our security forces since 2009. One glaring illustration of this is the fact that the Army Chief, Lt-General Azubuike Ihejirika, has lately been complaining of an under armed and under equipped military confronting Boko Haram. The paradox is, however, not surprising, considering credible allegations that one security institution recently spent over N600 million to construct an artificial grass football pitch for the recreation of its staff!

By all means let the EFCC go after each and every thieving government official and his relations and cronies, if the commission has good cases against them. However, since it has neither the time nor resources to do so, equity demands that it begins with the more glaring cases.

Surely all three cases above are much more demanding of the EFCC’s attention than Lamido’s case. When the commission is seen clearly to pick and choose mostly cases of only those perceived as opposition elements, it can only open itself and the presidency it reports to through the minister of Justice and attorney general of the federation, to accusations that it is merely fighting a selective, and therefore futile, war against corruption.