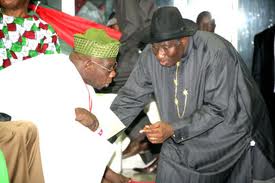 A letter of appeal to President Jonathan: Before it is too late’. That was the title of former President Olusegun Obasanjo’s 18-page missive to President Goodluck Jonathan, his adopted political son in whom he was once upon a time well pleased. Things seem so obviously to have fallen apart between the two that the exchange of public brickbats has become characteristic of their relationship.

You may honour him or hate him. You may venerate him or vilify him. You may seek to canonise or demonise him. Some try to deify him. Others may wish to demystify him. But one thing is certain. You cannot afford to take General Olusegun Mathew Aremu Obasanjo for granted. Anyone conversant with this column will know I am no fan of the Owu turned politician and farmer. But when he is right, intellectual honesty demands that we acknowledge it.

Some people have wondered what gives Obasanjo the temerity and audacity to lecture Jonathan on political morality, corruption or even good governance. They contend that Obasanjo has no moral right to pontificate to anybody given his own sordid record in office as President. Moreover, they argue, was he not the one who virtually imposed an ailing Umaru Yar’Adua and untested Goodluck Jonathan on the country in 2007? Why should he now cry over spilt milk?

Of course, I can understand these sentiments and they are quite pertinent. However, are there any truths in the grievous allegations made against Jonathan in Obasanjo’s treatise? That for me is the crucial question. I care less about the messenger. What matters is the message. In this case the content of the message is so volatile and inflammable that the presidency cannot afford just to dismiss it casually as if it is of no significance.

For instance, Obasanjo cites the menace of corruption that has reportedly assumed unprecedented dimensions under President Jonathan’s watch. OBJ stated bluntly that if Jonathan is not ready to “name, shame, prosecute and stoutly fight against corruption, it will be hollow; it will be a laughing matter”. The Owu farmer prayed further “May God grant you the grace for at least one effective correction against corruption, which seems to stink all over you and your government”.

Specifically, OBJ wanted President Goodluck Jonathan to clear the air on the alleged non-remittance of about $7 billion from the Nigerian National Petroleum Corporation (NNPC) to the Central Bank of Nigeria as recently detailed in a letter from the CBN to the President. Surprisingly, Obasanjo did not bring up the issue of the Minister of Aviation, Ms Stella Oduah, who approved the procurement of two bullet proof jeep vehicles for her personal use at an inflated cost of N255 million through the Nigerian Civil Aviation Authority. With all the facts already in the public arena, thanks to the House of Representatives public probe, the President set up a three member administrative panel to investigate the issue. Weeks after the report was submitted to Jonathan, nothing has been heard of the matter again.

Perhaps the most damaging allegation in OBJ’s treatise to Jonathan is that 1000 persons have been placed by the incumbent administration on political watch ahead of the 2015 election. If this is true, we can readily see how scarce human and material resources as well as time and money in the crucial security sector, are being dissipated in the wrong direction and for the wrong purposes. And this at a time when the country faces serious security challenges from diverse fronts.

Nigeria is transiting slowly, imperceptibly but steadily from a pseudo democracy to a full-fledged police state. The number of security agents diverted from their normal duties to safeguard the collective safety of all but are now deployed to protect the lives of a minority of people who made it impossible for the country to have a viable security architecture in the first place is simply mind-boggling.

Even more dangerously, Obasanjo has alleged that a squad of killers and snipers are being currently trained in preparation for the 2015 election. According to the former President, these killer squads are being trained in the same location where Abacha’s killer gangs were trained. The implication is that the most important and politically influential on the list of 1000 persons, reportedly under political watch, will most likely be the targets of the trained snipers and killer gangs.

Now, Obasanjo is no saint. Like all great men, he has virtues and vices aplenty. But even his most inveterate critics will tell you that he does not speak frivolously. Obasanjo is a soldier. He still remains venerated in that institution even though he retired decades ago. The same thing goes for General Ibrahim Babangida, General Abdulsaam Abubakar, General T.Y. Danjuma, General Muhamadu Buhari and several others. It is thus not unlikely that these ex-military leaders will continue to receive a stream of intelligence as regards goings on within the security sector.

It is instructive that Obasanjo’s letter dated 2nd December, 2013, was copied only to General Babangida, General Abdulslam Abubakar, General T.Y. Danjuma and Dr Alex Ekwueme. However, President Jonathan’s unrestrained speech at the memorial service in honour of Nelson Mandela at the Presidential Villa, Aso Rock, must have prompted the public release of the letter. On that occasion, Jonathan had berated those he called boastful leaders who seek to intimidate others and behave as if Nigeria is their bedroom.

The necessity to write this letter to the President and even go ahead to make it public, shows that there is insufficient communication between the incumbent in the country’s highest political office and his predecessors. Yes, Obasanjo has his faults aplenty – one of which is foisting incompetent and unprepared leadership at his departure in 2007. Again, he introduced this whole idea of the President as being leader of the party, an initiative which greatly subordinated the party to the whims and caprices of the president – a system which he decries today.

But in going public with the alleged misdemeanours of the Jonathan administration, Obasanjo is intelligent enough to know that he would be under intense criticism for supporting a candidate with no outstanding record of sterling performance in public office. His public letter thus suggests to me to be some sort of atonement – a subtle admission that he made a mistake in helping to prop up the career of Jonathan and that he is willing to join other forces to win power and bring about a fundamental change in the country come 2015.

But then, only the simpleton would eat with OBJ without an extra- long set of cutlery. For he could dine with you tonight and tomorrow be quite at home joining in the electoral victory of your supposedly common opponent.

Obasanjo says he wrote to Jonathan before it is too late. But is it not too late already? The die is cast. Whatever his current posturing, Jonathan will run. Without a credible record of performance, he will have to rely on primordial sentiments as well as the collusion of INEC and security officials to win. If the electoral outcomes announced by INEC do not reflect the will of the majority, we may well begin to sing the NUNC DIMITIS of Democracy in Nigeria.