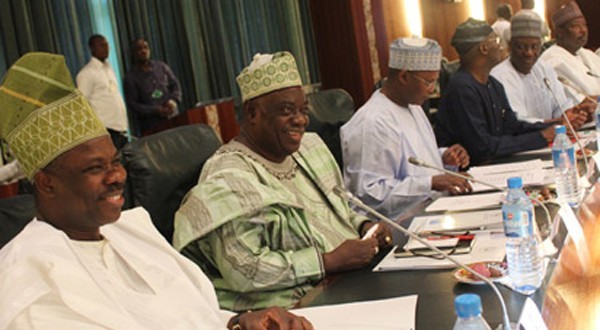 Governors are disturbed by the state of the economy, which has remained hazy to them.

They are to raise nine issues on Thursday at the meeting of the National Economic Council (NEC), which has not been convened in the past three months.

Many states have complained of being shortchanged in their monthly allocations. Some have been borrowing to pay their workers’ monthly wages, The Nation learnt at the weekend.

Vice-President Namadi Sambo has summoned a NEC meeting, following the governors’ compliant that they are being kept in the dark about the economy’s health.

The nine issues are:

•Is it true that $50billion was unremitted to the Federation Account? Where is the money?

•Is Nigeria is broke or not;

•Why was the NEC consulted before 2014 Budget was presented to the National Assembly;

•How much has Nigeria earned from its oil sales in 2013 and what percentage of the budget is funded by these receipts?

•How much oil does Nigeria produce daily?

•Is it a fact that crude oil was sold at prices that hovered about $110 per day throughout the year?

Sections 18 and 19 of the 1999 Constitution states: “The Economic Council shall comprise the following members –

(a) the Vice-President who shall be the Chairman;

(b) the Governor of each State of the Federation; and

The governors have not been happy that the Presidency has kept NEC meeting in abeyance for about three months.

According to sources, the governors had initially suspected that the delay in convening the meeting had to do with the Peoples Democratic Party (PDP) crisis, but they later discovered that it had to do with the state of the economy.

A governor said: “We are really unhappy that the VP has refused to convene NEC meeting for three months running, which is in breach of the 1999 Constitution.

“The excuse from the Presidency for shifting the meeting has been that there is no money in the treasury and it would not want the governors to take it to task on it.

“Our position is that this is a constitutional breach because we are expected to meet monthly.”

Another governor, who also pleaded not to be named, said: “It is so sad that the Presidency forwarded the 2014 Budget to the National Assembly without consulting the NEC. This is an aberration.

“They refused to summon NEC meeting so that we will not raise questions.”

It was gathered that following pressure from governors on the state of the nation’s economy, Sambo fixed a NEC meeting for Thursday.

A governor said: “We got a belated notice to come for NEC meeting on Thursday. I am unhappy because we had longed for the meeting in the last three months.

“However some of us have met and the NEC will enable us to ask nine questions from the Federal Government.

“These nine questions include some of those Governor Rotimi Amaechi had put in the public domain.”

Since September 23, states have been experiencing shortfall as the monthly Federal Allocation and Appropriation Committee (FAAC) was aborted twice because of lack of cash to share.

At a stage, Finance Minister Dr. Ngozi Okonjo-Iweala, said it was a bit difficult to pay state government allocations in full.

But the Director-General of Budget Office, Mr. Bright Okogwu and his colleague, the Accountant-General of the Federation, Mr. Jonah Otunla, said: “Nigeria is not broke but it is having cash flow problems.”

In Akwa Ibom State, the Commissioner for Finance, Mr. Bassey Akpan said the state government secured a loan of N80 billion from Standard Chartered Bank of London in order to meet its obligations.

In Benue State, Teachers have been on strike in the last one month over non-payment of minimum wage.

A senior government official in Kaduna State said last night that the shortfall was affecting government activities in the state ‘tremendously.”

He said: “I must tell you that the shortfall is affecting us greatly. You know that there are so many things that are at a standstill at the moment. It is because of the shortfall that this is happening,

“You see people don’t know what is happening and so it is easy for them to criticise from outside. But when you get into the system, you discover that things are different.

“Actually, Edo State Governor Adams Oshiomhole has put the whole thing in proper perspective. The states are suffering from the shortfall. But it is easier for him to speak out because he is from the opposition. But things are not easy for us at all”.

In spite of that, the aide said the government is trying its best to ensure that workers’ salaries are not affected.

Kano State Commissioner for Budget and Planning Alhaji Yusuf Bello Dambata said the state had been taking ingenious action to beat the shortfall.

“We are trying to meet our promises to the people by blocking leakages.

An Akwa Ibom Government House source, who preferred anonymity, explained that the effects of shortage in allocation from the federal government is affecting urban local government areas where are more concentration of primary schools.

According to him, in Uyo local government area, due to the large concentration of primary schools, after deducting salaries of the primary school teachers nothing is left to pay salaries of more than 600 members of staff.

His words: “Presenting, Uyo local government area owes its members of staff two months salaries. That of October and November has not been paid. The workers are not even sure of getting December salary.”

He said: “We expect that as a country, we cannot continue to have this distortion in revenue collection and projection where the largest source of revenue comes from a single item. What it simply means is that we use revenue from our Internally Generated Revenue (IGR) that we should have used to pay contractors to keep the public service going. So, that distorts so many things.”