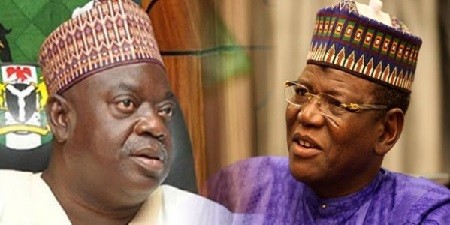 Activism or taking a stand for democracy and good governance demands consistency of purpose from the individual or group. Same cannot be said of Governor Babangida Aliyu of Niger and his Jigawa state colleague, Sule Lamido, who alongside their erstwhile colleagues in the PDP – Rotimi Amaechi (Rivers), Murtala Nyako (Adamawa), Rabiu Kwankwaso (Kano), Gov. Abdulfatah Ahmed (Kwara) and Gov. Aliyu Wamakko (Sokoto) – waged a war of attrition against the Bamanga Tukur led leadership resulting in the formation of the now defunct New PDP.

There are many questions begging for answers why two prominent governors in the forefront of the “struggle” had to stay put or sit on the fence as others cross carpeted to the All Progressive Congress (APC).

The announcement by Governors Aliyu and Lamido that they were not part of the move reduced the impact of what would have become one of the few significant political developments in the history of the country and turn the self-acclaimed largest party in Africa to a minority in terms of number of states under its control.

In the light of the manner the duo backed out of the merger, kudos should be given to the five governors who matched their words with action. We saw reasons to believe that we still have politicians who can question authority and make necessary political alignment and re-alignment to drive their message home. They could have as well given sundry reasons why jumping ship at that point in time was not the right political move.

However, the action of the defecting governors exposed the underbelly of our topsy-turvy politics. Ours is a politics of convenience, devoid of ideology and any form of political philosophy.

It leaves one to wonder what Aliyu and Lamido were up to, considering that they were always a part of G-7. Were they spies for the PDP in the nPDP? What kind of battle were they fighting that they couldn’t resolve issues within the party and remain? Was there some secret pact between this two and the presidency? Are they merely acting out a script? Were they ever in spirit and sync with the other five governors? Why did they start the rebellion in the first place if they weren’t ready to jump ship when the going gets tough, knowing there cannot be two captains in a ship. Or were they just fearful?

Regardless of the fact that the presidency has continued to persecute Aliyu and Lamido and will not hesitate to pull the strings in overdrive, should they remain recalcitrant. The line they’ve bandied about that they won’t leave PDP for Jonathan and his acolyte might become a stand too difficult to maintain in due course.

In other climes, like America, which our politics and system of government is modeled after, mergers or cross carpeting that are a major feature of our democracy is almost a no go area for them. Theirs is a politics built on ideology and political philosophy entrenched in values and culture. It will be easier for a camel to go through the eye of a needle than for Donald Trump, a staunch Republican, to decamp to the Democratic party. What Republicans and Democrats don’t have in common goes beyond the ballot box. Their personalities, core beliefs and policy ideas are fundamentally different. In these circumstances, it is almost impossible to see an nPDP-APC merger. Ours is a game of numbers, where capacity is everything. If our political parties are ideology based, the moment you move from one party to another, it means you are changing or have changed your ideologies, which in essence, is political suicide.

Despite several meetings with the aggrieved governors, President Jonathan’s inability to nip crisis in the bud came to the fore. The leaky umbrella in the PDP today is the aftermath of the Nigerian Governors Forum (NGF) election squabble which as everyone predicted from the outset, had the propensity to polarise the governors in the PDP with wider political consequences.

There were only two governors who genuinely had problems in their states, they faced serious battles and wanted to be in control of everything – Rotimi Amaechi and Murtala Nyako. They simply manipulated other governors nursing presidential ambition and those who had issues with the national leadership of the party to join them. The likes of Bukola Saraki and Timipriye Sylva, both former governors, were being witch hunted by anti-corruption agencies, became easy converts.

Governor Babangida Aliyu’s case is one of a shaky home base. Moving to the APC might signal the beginning of the end of his political future. He was not a member of PDP but only drafted into it so he could contest the governorship of Niger State. Already, renowned statesmen of the PDP like Jerry Gana  and former governor, Abdulkadir Kure are waiting on the sidelines to take over the party structure should he cross over. Losing his political base and by extension, future, was his greatest fear. Neither of these governors can survive or remain politically relevant outside the PDP. Reconciliation at this juncture seem to be the surest option.

For Sule Lamido, it has always been somewhat personal. Lamido was a governor and he could not deliver Jigawa to President Jonathan, what should we expect from him now that he won’t contest for governorship again? To add salt to injury, his two sons, and some Jigawa state government officials are being summoned to Abuja frequently, either to the State Security Service (SSS) or the EFCC, trying to answer questions on how Jigawa state funds were managed or mismanaged. For fear of the EFCC, he backtracked from the merger.

But on a second thought it makes sense for a founding member of the PDP, like Lamido, not to leave the party for people he described as opportunists. Lamido was one of the G-34 members who mobilized under Dr. Alex Ekwueme and the late Chief Solomon Lar to present a letter to Gen. Sani Abacha asking him not to contest. He played a very significant role in the formation of the PDP and it will be very unwise for him as he rightly said to leave the party he helped built.

Moreover, Sule Lamido and Babangida Aliyu are two of the few northern governors eyeing the PDP presidential ticket capable of posing serious threat to Jonathan at the primaries. The backers of the G-7 had apparently kept them both in the party to form the backbone of the opposition from the north to Jonathan’s second term bid. Should they move to the opposition, who will wrestle power with Jonathan from their region?

There is a pitfall in this much publicized defection. The merging of G-5 with the progressives should not be mistaken to mean the merging of their large followership base, because “They are not your employees, therefore, some of your supporters might stay” as President Jonathan rightly opined. Same applies to their respective members in the House of Reps and Senate from their states.

Since the defection of the G-5, it is also worthy of note that after their meeting with President Jonathan, neither Lamido nor Aliyu has announced a shift of ground in their opposition to the Bamanga Tukur leadership of the PDP and Jonathan’s second term bid. This has left two of them with the option of either swimming across to join their colleagues in APC or reconciling with their arch enemy, Tukur.

Be it as it may, the merger went down in history as the most significant political development in Nigeria. As a close observer of political event described the situation Governors Aliyu and Lamido have found themselves, withdrawal from the exodus of the PDP defection train to the APC seem to have left them on a Political Island – somewhere in-between the PDP and the APC.

Theophilus Ilevbare is a public affairs commentator. He can be reached via theophilus@ilevbare.com. Engage him on twitter, @tilevbare. He blogs at http://ilevbare.com.