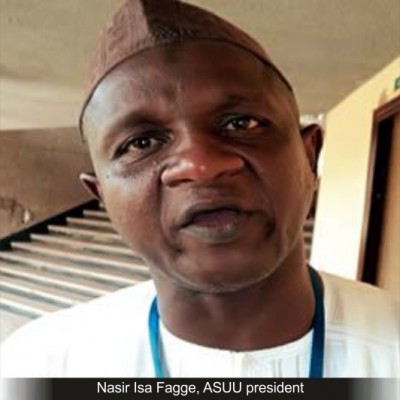 When President Jonathan engaged the Academic Staff Union of Universities (ASUU) on their five months old strike, there was general optimism that the end to the dispute was in sight. After about 13 hours of negotiations between the executives of ASUU, leaders from the Nigerian Labor Congress NLC and Trade Union Congress TUC, key decisions were said to have been evolved to end the strike.

As part of the understanding, ASUU undertook to present the resolutions to its National Executive Committee NEC and report back to the federal government. The union subsequently came up with some conditions which it wanted the government to endorse for the resolutions to be binding and the strike called off.

These included the depositing of the N200billion revitalization fund for public universities in the Central Bank of Nigeria (CBN) and subsequent disbursement to the benefiting universities within two weeks; inclusion of the non-victimization clause in the agreement and insistence that the resolutions be signed by the government.

But the federal government saw these as entirely new demands and evidence that ASUU was up to sabotage all efforts at sorting issues. It therefore called for broke directing all Vice Chancellors of federal universities to re-open them immediately and threatened to sack all lecturers who defy this order by failing to report and sign the attendance register by last Wednesday.

ASUU is adamant insisting that the strike will continue in view of the turn of events. It has argued that the letter it wrote to the president through the supervising minister of education did not amount to new demands. According to the union, the N200 billion revitalization fund as contained in the government white is meant for 2013 and as such its demand that it should be disbursed within this time frame is nothing new. Similarly, it argued that the non victimization clause is a universal practice while the insistence that the resolutions be signed by both parties is a requirement of all agreements.

As things stand, the end to the strike is not in sight. There is every indication that the toughened positions of both parties might worsen matters. Thus the education system which has been lying prostrate these five months will continue to suffer further devastation as the strike lingers. The federal government and ASUU are in mutual recrimination as to who takes the blame for the current impasse. And the court of public is expected to give a verdict on the matter. Whether the verdict of the public will suffice to end the strike is a different kettle of fish altogether.

The key issue here is whether the three items contained in ASUU’s letter to the president constitute new conditions and whether ASUU was right to have made those demands. On the other hand, even if they were new demands, was it also proper for the government to have reacted in the way and manner it did? ASUU does not see them as new demands on the grounds of the reasons stated above. But that is exactly where it did not get the matter right. It does not consider asking the president to remit the N200 billion revitalization funds to the CBN and disburse same to benefiting universities within two weeks as a new condition. This is at best laughable. If it is not a new condition why did the union come up with it at the last minute? And why was it not raised during their meeting with the president? And if the non victimization clause is a universal practice as ASUU has argued, it should have been taken for granted. It wants all the decisions reached to be signed. What is not clear is whether it is the president with whom they sat in negotiation they want to sign that document. If it is so, they must have gotten the matter wrong. Discussions with the number one citizen of any country are not something to be trivialized. The impression one gets from all these is that the union does not trust the president. That is very unfortunate indeed. By giving the impression that the president cannot be trusted and then requiring him to sign the document, the ASUU leadership conducted themselves as if they have no respect for that office irrespective of whoever occupies it. The very fact that the president undertook personally to negotiate with them was enough for them to have given him the benefit of doubt. They should have deferred to him and watch out for the eventual outcome. But to now begin to insist that the president must deposit the money in the CBN and disburse same within two weeks is enough to ruffle shoulders. Things do not necessarily work out that way.

The impression one gets from the position of ASUU is that it want to win all. Zero sum game option in decision theory goes with fatal consequences. And as can be gleaned from the impasse, it has turned out a monumental calamity at a time hopes were high that the strike was about to end.

It is however, a different thing altogether whether the response of the government was the most appropriate in the circumstance. The government went to the extreme in its reaction to the new demands of the union. There are other ways the matter could have been handled without bringing about the current pass. The net effect of the action is the continuation of strike thus defeating the whole idea of getting our universities back to the classroom. It will not serve the cause of our universities better.

But for some inexplicable reasons bothering on political expediency, the federal government is yet to muster the necessary courage to be decisive on the introduction of school fees in the universities. That is the crux of the matter. It is not that the government is not willing to introduce such fees. It is afraid of the backlash of the policy given public perception of the waste and unabated corruption in public places. Our people see free university education as the only way to benefit from the enormous resources nature bestowed on this country bountifully.

That has been the problem. But for how long shall we continue with the rot in our universities on account of government’s inability to fund them adequately? The time has come for the government to rise to the challenge that it can no longer fund the universities solely. It is better we charge some fees and provide quality university education than allow the current drain in our foreign exchange on account of the high number of our citizens that study outside this country. Already some state universities have risen to this challenge by charging school fees like the private ones. Ironically, some of these fee paying state universities are also in the strike for very hazy reasons. And if one may ask, what is their business in this strike? Why should they deny children who have paid for their education access to it? Or are they also hoping to get part of the revitalization fund meant for federal universities? Such state governments must order the teachers back to classes now.