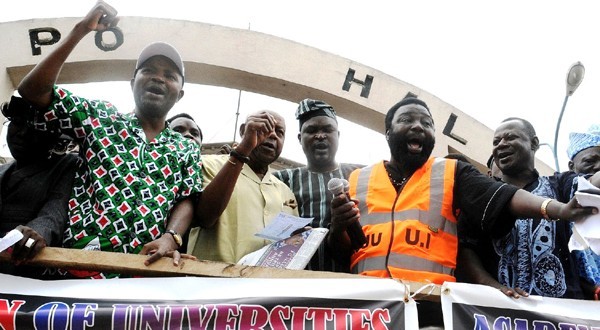 At a time Nigerian students earnestly await the announcement of a truce between the Federal Government and the Academic Staff Union of Universities regarding the ongoing strike, the former has in its usual manner of show of unnecessary force, issued a one-week ultimatum to the striking lecturers to call off their action.

This writer predicted this latest development hours after President Goodluck Jonathan announced the rejig of the federal cabinet on Wednesday, September 11, 2013. My friends and I discussed the matter. During our chat, I averred that now that Nyesom Wike, ‘strongman’ of Ikwerre (and by large Rivers State) is now in charge of the Education Ministry, more wahala had landed.

There is no gainsaying that the Thursday morning’s marching order to ASUU might have been sponsored by the Minister. But such pronouncement is not what we wish for; indeed, it falls short of the desire and expectations of stakeholders, including parents, teachers, and even food sellers as well as other business owners on campuses.

It is sad that negotiations between both parties take one-step forward and two or more backward. The dilly-dally started with the Anyim Pius Anyim-led committee on negotiations with ASUU. When that failed to produce any result, government in a not well-thought out strategy, delegated Gabriel Suswam, the Governor of a Federating State (Benue) to lead talks with a body comprising thousands of lectures across the country

In a chat with a lecturer in a state-owned varsity, he stated that “Asking a governor, whose educational qualification is still in doubt, to chair the Needs Assessment Implementation Committee for Nigerian Universities, is not the way to go. Firstly, a high-powered FG official should have been called in. Secondly, I don’t think he has the capacity, charisma and zeal to do the job. Mark my words, Suswam will fail.” As prophesied, he failed.

Then we had the Namadi Sambo-led committee, which according to ASUU brought nothing new to the table. Only one meeting with the Vice President was enough turn-off for the union.

Finally, the president deemed it appropriate to wade into the FOUR months impasse. Too late in the day if you ask me; a leader needs not wait that long to personally take charge of such burning national issue. After the marathon meeting, Mr. Jonathan presided, it was agreed that N220,000,000,000 would be injected into the universities system for a period of five years, i.e, the sum of N1.1trillion. A fair deal no doubt. In fact, most citizens say the fund if well utilized was enough to turn around the system. The Union agreed and requested the opening of an account with the Central Bank of Nigeria where the money will be kept and released at specified dates.

But rather than build on this, government has gone ahead to issue (in my view) an empty threat of one week ultimatum. It has also impressed on Vice-Chancellors to declare the jobs of the lecturers vacant if they do not return to classrooms by Wednesday, December 4 2013.

Let me add that I have been studying the body language of President Jonathan on this matter and below are some pointers, which put a bold question mark on his seriousness in resolving the deadlock.

Recall that at the beginning of the strike in July, he posited, directly or indirectly, that ASUU cannot hold him to ransom because the 2009 pact does not bear his signature. The comment is goof in its entirety because he was part of the government that reached the deal. Mr. Jonathan wants the North to support him in his quest to return to Aso Rock in 2015, yet he feels comfortable to wave off some resolutions and policies of their late son, Umaru Musa Yar’Adua. He shoots himself in the foot without knowing, whereas he has advisers and strategists on his payroll.

Recall that he had directly or indirectly, asserted that the impasse is being deliberately prolonged and influenced by Northerners and leaders of opposition party. This doesn’t fit to be counted as a genuine reason for his administration’s failure to convince the lecturers to resume.

Recall also that upon his return from London to Abuja from the 15th Meeting of the Honorary International Investors Council, he only commented on his trip, his health issue, the purchase of bulletpoof cars for Aviation Minister, Stella Oduah and of course, his meeting with the seven aggrieved Peoples Democratic Party (PDP).

“I don’t think I will be able to hold any meeting, you know six hours flight is quite a distance and also following from my health challenges. I don’t know how soon, but we will be able to meet within the week,” he said.

So much for politics and less for education; that is the state we have found ourselves. Our leader gives a time frame to meet with governors, keeps mum on a matter that involves those who impact knowledge on tomorrow’s leaders. What a shame!

ASUU Chairman, Nasir Isa Fagge and his team do not appear like the kind of persons that develop cold feet at the mention of deadlines. While I agree that the union should resume and continue negotiations, Nigerians must not forget that successive administrations made several promises and commitments, but failed to implement. We need to understand the plight of the lecturers; they are fighting a just course. Needless to say that sending our wards to tertiary institutions abroad will continue to harm our image and deplete wealth that should remain here and boost our economy.

The sooner the Federal Government and its officials realize that forceful tactics no longer work in resolving civil disputes, the better for the nation. The FG should be informed that it makes more sense to drag ASUU to court, instead of the ill-advised ultimatum. It has never worked, this case won’t be an exception.