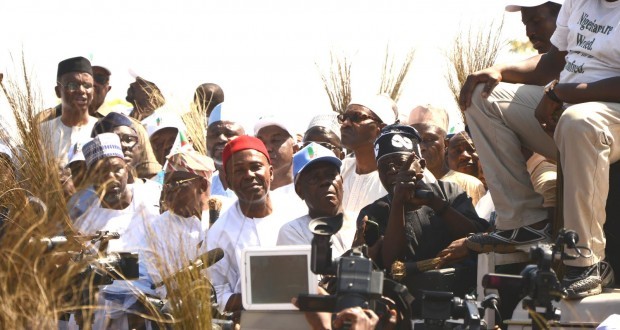 Towards 2015, there is just a thin line separating the newly formed All Progressive Congress and change yearning Nigerian citizens. I believe that thin line has been further widened by the absorption  of 5 members of the G7 or better described as PDP rebel governors from the crises ridden People’s Democratic Party. The PDP crises had deteriorated into an explosion and the debris from this explosion is settling into the implosion of the APC who wants to rake in any and everybody who has a stake, influence and numbers to impact their power struggle for the presidency in 2015. At least, politics is about numbers.

The most pathetic of it all is the justification that the leadership of the APC is giving Nigerians for absorbing the PDP rebel governors, regarding them as reformed men who have merged “in order to rescue our fledgling democracy and nation. The leadership of the APC must have achieved this feat before even thinking of what to tell Nigerians because how more ludicrous can this justification sound. Sule Lamido of Jigawa might also have been regarded as “reformed” if he had also joined the APC but his children have a case of money laundering hanging over their heads and it is only wise to remain with the president who can make all that go away in exchange for staying put at the PDP.

Before now, the rebel governors have always given the reasons for the rebellion. They have put it as how Jonathan and Bamangar Tukur have run the PDP like it was their private property, their arbitrariness in making party decisions.  It is however funny that in the weeks leading to their “reformation” and merger with the APC, their rebellion had taken a National trend, all too sudden for them to think of “rescuing our fledgling democracy”. How suiting will it have been if they truly had Nigeria and Nigerians in mind when they took that decision? How pleasing will it have been if only the APC leadership had Nigeria and Nigerians in mind when they lobbied to get the rebels? But, who will question the “number factor?  Isn’t that all that matters to them?

Who then do we believe? The thinning PDP or the growing APC ranks? I have always argued that for development in Nigeria, there must be change in legislative majority and ultimately a change at the center. In achieving this, I have always pictured the APC as a possible altar to raise Nigeria from the pit of under development that the PDP has plunged her into. But, despite arguing for the APC, I have always had reservations on the credibility of some of the leaders. All because am still trying to wrap my head around how it was possible for Ribadu to loose woefully in the southwest except in Osun at the 2011 polls after the ACN had just won almost all available senatorial seats contested a week earlier. Then, did the southwest buy GEJ’s shoeless story or the ACN leaders negotiated the region away?  With this and new unfolding activities of the new party, I am no longer sure the APC might be that altar Nigerians have been yearning for.

The APC might just be the biggest joke towards 2015 polls. The party’s hypocrisy is highly dignified in its romance with men and leaders of Nigeria’s ill present and troubling past. So! If for instance, the remaining Northern leaders in the PDP rise against Jonathan and he suddenly needs a new platform. Isn’t it possible that the APC will regard him “reformed” and negotiate him into the party? Just wondering!  Now that the APC is increasing in numbers, are they going to hand their ideologies in print to these “reformed” rebels? Oh!  Does the APC even have a political ideology? Other than bastardize the word “progressives”. Because prior to the merger of the individual parties that became APC, the units such as the ACN, ANPP were undemocratic parties who faired low and still fair low in internal democracy compared to the PDP. The Bamidele vs APC Ekiti imbroglio of recent weeks is a pointer to that.

On what grounds should we put the APC?  How different is the party from the PDP?  The APC is a party that can easily be described as a union of undemocratic party men desperate to win the presidential election by all means available even if it means dining with the men that plunged Nigeria into its present chaotic conditions. Isn’t the APC too desperate?  How well have they regarded Nigerian voters as the true numbers they need at the polls? Do they believe in us? What ideologies are they selling us to fight their cause? Haven’t we been neglected because they believe we can’t muster the will for an electoral revolution to bring them to power? Are they not going after these governors to cement the machineries that actually gave the governors power over the individual states they control? How good would it have been if the governors actually begged to be part of the APC rather than the other way around? Isn’t the APC just another PDP? Then WHO IS THE APC? We desperately need her leadership to tell us who they are and what ideology they actually preach because I believe the APC is yet to dish out all its surprise packages.