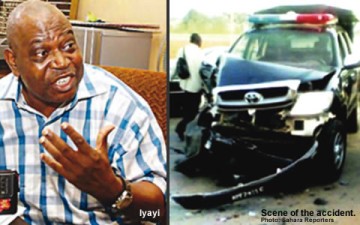 The people of Nigeria have never had the government they deserve. Try the 30 kilometre Lagos bound five lane 10,000 vehicle traffic jam this past Sunday afternoon. Try the 2000-car traffic mayhem at the MM2 Airport car park and arrivals and departure areas on Friday November 15. Too many vehicles – No governance! The successive governments of Nigeria have had such malleable people to govern, a fact the governments took advantage of to bastardise the citizens and country such that corruption rose from 10% as reported by very distinguished late Princess Tejumade Alakija, Head of Service in the Western Region to 100% and even 300%. How many ID cards would we each have if all the multibillion dollar ID card megascams had been supervised for progress and service delivery and not you-chop-I-chop-for-the-boys? The problem from the ID scams to the still-in-court N26m -N34billion pension scams to the ‘hot in jail’ Oyo State pension scam or the N250m bullet proof scam point to bad governance.

Of course the Mobutu Economic Solution (MES) applies equally to the Nigerian corrupt political and economic life. The MES revealed that if Mobutu asked for $1m, the Finance Minister asked the Zairean CBN for $2m and the ZCBN Governor signed out $3m. The ZCBN chopped $1m and sent $2m to the Finance Minister who took $1m and sent $1m to Mobutu. The whole country has for too long been at the mercy of unaudited agencies well exemplified by NNPC, NPA, NEPA alias PHCN and FERMA exclusively controlled by little people in Abuja with minds too small to grasp the significance of their abused power and responsibility to better the lives of Nigerians. Their failure to perform nationwide against the ‘Rise of the Nigerian darkness and Pothole’ has killed and injured too many ‘Fellow Nigerians’ and made millions suffer the loss of loved ones and their earning power from too costly and sometimes deadly alternative power from poisonous gases and explosions and murderous potholes. The result is often a failure to achieve full potential by offspring. Every accident deprives someone of an education and earning potential. This is why every pothole should be a top priority of normal government and not a special reward of favour to the citizenry.  They, government men and women, claim we will have power, electric power, soon. But all Nigerians should ask why did we not have electric power when Generals Buhari, Babangida, Abacha, Abdusallam and General Obasanjo had ‘General’ totalitarian and ‘General’ democratic control and were ‘in total power’? Was their failure to add a simple 500 0r 1000Mw annually to the Nigerian national grid because of their myopia, misdemeanour, incompetence, greed and corruption?  The sale of failed government agencies like PHCN is actually a failure of leadership and supervision of bad employees. Remember schools were helped to fail when we stopped listening to, or failed to fund school inspectors and they in turn always expecting gifts like goats and cash to fill their car boots in exchange for a pass mark when they visited.

The cost of travel remains far too high in Nigeria. Every day the media is filled with stories of road attacks, mislabelled ‘accidents’. If someone crashes into you at 100+kph that is an attack by another road user, not an accident. No death is acceptable or explainable as an act of God. God may know about it and allow it but God does not create the scenario. It is the free will of sometimes drunken men at the steering wheel who speed and crash into others. So many deaths and injuries for people merely going from A to B. The Okada Epidemic claims thousands maimed and murdered. Is that an Act of God? No! We have responsibility for our actions and our lives. When the little people die, no one cares beyond a static. May you should not die with someone more ‘VIP’ than you or your death will never be remembered. You will just be ‘VIP and 23 others died yesterday’. May that not be your portion! In the sight of God ‘VIP and 26 others’ must line up in order of death time for judgement, no queue jumping, though the VIP will probably be in the first queue he did not want to jump. Who wants to rush to Heaven?

Professor Festus Iyayi, 66, former ASUU President, Winner of the Commonwealth Prize for Literature and writer of books including Violence, The Contract, Heroes and Awaiting Court Martial was not planning on joining the queue to heaven when he headed for the ASUU meeting on Tuesday November 12, having bid farewell to grandchildren and joined in the traditional prayer for a Safe Journey and ‘Travel Mercies’. He was struck down, not by an Act of God like lightening, an earthquake, a flood, but by man in form of a reckless governor Wada’s convoy-driver who must be breathalysed and prosecuted. Some may have wondered at the need for such senior citizens to travel to solve ASUU’s protracted strike with a recalcitrant government known for reversing agreements. Note that no matter how bad tertiary education is, it would have been primary school level without ASUU’s continuous struggle and intermittent strikes. The ASUU strike has yielded death. May this and other terrible deaths yield fruit for the students and staff, now dedicated to unnecessarily late Prof Iyayi. Governor Wada had demonstrated that he is a poor supervisor of man and machine.