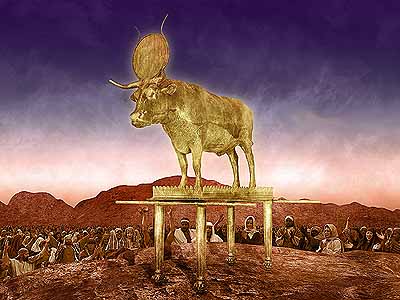 There are Sundays and there are Sundays but this Sunday (3rd November 2013) was another Sunday in the history of Sundays. This Sunday was full of mixed feelings considering the fact that refusal to keep the Sabbath day holy is abhorrent to one of the basic/central tenets  of Christianity. Why do people desert the theory of theosophy at the expense of atheism? This Sunday reiterates and underscores the belief of people in anachronism, they still belief in ancestors and ancestral event even at this point of the year where everything around suggests the end time is near. Why am I keeping the gory details? Today was a day in the history of Ondo town and Ondo indigenes when they reflect and pay homage to the god their ancestors served and probably introduced them to while they are still alive. It is a norm in Ondo town that, every third day in the eleventh month of any year must be set aside for worshiping the idol, irrespective of the state you come from provided you reside in Ondo town. This year was not an exemption neither was today an exemption.

There is this festival they celebrate every year in Ondo town, they call it “odun-moko” meaning “it is a festival that is supposed to be performed by every maiden in the town such that you are under a compulsory house arrest for at least 12 hours but any maid who disobeys might end up being childless. This is what this festival represents.

However, it came to me as a surprise that this year’s celebration coincided with the Sabbath day; i was surprised because of the heraldic nature of humans. It was not just a coincidence but a test of Christian credentials. However it was only a few who had the right spiritual understanding to understand that it was a test that is meant to separate an hypocrite from a Christian but so many put their Christian faith into question all because they couldn’t say YES to JESUS when the ovation was becoming obfuscate. They could not just blot their copybook instead; they were blotting on the landscape that can only offer ugliness. People were presented with choices to make today, a few made the right choice but many made the wrong choice, some could not say. I belong to Jesus even at those critical t-junctures where you advertise the God you truly know and serve without having to pay for advertisement but some also use the opportunity very well by convincing “odun-mokoites” on the need to serve a beautiful God that is not comparable to their own god. That is the only positive we can relish as people who resides in Ondo-town.

Unfortunately, some people couldn’t go to church today because they have fear in the god that have ears and yet cannot hear, it has nose but it cannot do the normal smelling business, they belief in the deceit of the enemy, they belief in norms and traditions instead of believing in the commandments of God. They are just misplacing priority, they fear god but disrespect God who created all creatures. They have forgotten the names of God. Too much familiarity. Is it because he said I am slow to anger and plenteous in mercy? Why the familiarity with God that we could be so bold to forsake the gathering of the righteous for the reference of the works of men?

In fact, statistics showed that today’s service to God recorded a low turnout of worshippers in Ondo town. Unlike before, people tend to go to churches moreon Sunday but reverse was the case today in Ondo-town. Many Christians failed the test of faith and maturity. They acted like carnal Christians and yet they claim to have been born-again for about one to three decades now, if not more but no proof of Christianity in them. Will Jesus abandon the gathering of the saints for the honour of a small god? Ask yourself. Honestly, you have failed this city. They have committed a sin of idolatry against God. I just hope the victims of hypo-criticality will be sober and ask God for forgiveness. For God sake, this is just a canteen culture, why do people add so much importance to it; they tend to preach the gospel of “giving unto Caesar what belongs to Caesar” without remembering that God also mandated us to keep the Sabbath day Holy. This is what I call spiritual ignorance.

This column is just showing his discontentment on what I term misplaced priority, I am not bloviate neither am I an island of knowledge. In any world I find myself, I will always speak highly of Ondo indigenes, they have cerebral competence and their all-round acumen is great but even with that, you find these two peculiarities with any Ondo indigene. These are first, they are extremely gregarious, very hospitable but they also like social gatherings, some call it “afefeyeye” in fact, and they can spend their last penny on events not minding whether they go insolvent nor go bankrupt. They just like to please people not minding the cost. You can proof me otherwise. Secondly, they believe in mixing “god” with “God”, they do not see anything bad in ignoring God to serve idol. Can darkness and light collaborate? However, few of them are trying but many of them still fall short in terms of trying but honestly that is their makeup. These are the views I have about them, if you do not believe their peculiarity, and then believe their anachronism. Salvation is free but discipleship is costly; our discipleship is being questioned once again because we have failed in our primary assignment to him. What happened in Ondo-town suggests that. I hope one day we will henceforth be a practical Christian not a professional Christian.

Orukotan lives in Ondo State. A student of the Federal University of Technology, Akure