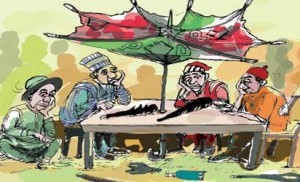 The crisis which polarised the Peoples Democratic Party (PDP) started in 2010, when President Goodluck Jonathan declared his intention to contest the 2011 presidential election. He perceived some serving governors as not being supportive of his ambition. The matter was resolved in a “family” way and Dr. Jonathan emerged as the candidate based on agreement with the northern governors that he would not run in 2015.

Though President Jonathan is yet to declare his ambition to contest in 2015, but his body language and the utterances of his kinsmen and aides have shown that Jonathan is not willing to pack out of Aso Villa on May 29, 2015.

Governor Sule Lamido of Jigawa State had shown interest in presidency, a move that was considered as a threat to the ambition of President Jonathan. The people of South-south, particularly the Ijaws, had threatened that if Jonathan was not allowed to run for second term, there will be war in this country. They branded Governor Rotimi Amaechi as a sell -out for purportedly accepting to be running mate to Lamido, instead of backing a fellow South-south for presidency in 2015. Amaechi had denied this allegation several times but the presidency insisted that he had vice presidential ambition.

The Chairman PDP Board of Trustees, Chief Anthony Anenih used the occasion of his birthday anniversary to seek endorsement of Jonathan as the party’s presidential candidate in 2015. Governor Babangida Aliyu of Niger State, who is also Chairman of The Northern Governors Forum said that Jonathan signed an agreement with the North that he would not re-contest in 2015 and that the party’s presidential candidate would come from the North. President Jonathan has denied signing any agreement with any group concerning 2015.

Some governors and members of the National Working Committee (NWC) are not impressed with the leadership style of Alhaji Bamanga Tukur. He was alleged of running the party as a private enterprise.

While the concerned party members were canvassing for internal democracy in the party, Bamanga Tukur in a bid to demystify the “stubborn governors” and take over the party structures ahead of 2015, dissolved the state executive committees of Adamawa and Kano states, among others, and appointed Care-taker Committee members without consulting the governors.

The NWC announced the suspension of Governor Amaechi on May 27, for refusing “to obey the lawful directive of the Rivers State Executive Committee to rescind his decision dissolving the elected Executive Council of Obiokpor Local Government Area of Rivers State. This is in furtherance of the determination of the leadership of the party to enforce discipline at all levels within the party.” The party suspended Amaechi because of a decision taken by the State House of Assembly and for refusing to take directive from the state party chairman. He was never allowed to defend himself.

On June 5, the NWC suspended Governor Aliyu Wamakko of Sokoto State. His offence was that he ignored invitations and lawful directives of the NWC. Though he was later reinstated but Amaechi remained suspended.A group of five legislators with the support of Abuja-based politicians made a futile attempt to impeach Governor Amaechi. There was fracas in the House of Assembly as 27 members loyal to Amaechi blocked the move. The appearnce of the governor and his security brought the situaton under control. Governor Aliyu and his colleagues who were in Rivers to pay solidarity visit to Amaechi were stoned at the airport by those suspected to be supporters of the Minister of Education Nyesom Wike.

The high handedness of the party leadership brought the seven governors together and formed what was known as G7. They were Governors Aliyu (Niger), Rabiu Kwakwanso (Kano), Wamakko (Sokoto). Murtala Nyako (Adamawa), Amaechi (Rivers), AbduFattah Ahmed (Kwara) and Lamido (Jigawa).

At the special convention of the party held in August, a group of party members including the governors stormed out of the Eagle Square, venue of the convention. It was discovered that the delegate lists from the states of the governors opposed to Bamanga Tukur’s leadership were substituted to humble them. The aggrieved members immediately regrouped at a location and held a parallel convention with former Vice President Atiku Abubakar, Senator Bukola Saraki, and the seven governors in attendance. They announced the formation of new PDP under the chairmanship of Alhaji Abubakar Kawu Baraje and Prince Olagunsoye Oyinlola as National Secretary.

In pursuit of peaceful resolution of the crisis, the aggrieved governors visited eminent leaders like Chief Olusegun Obasanjo, Generals Ibrahim Babangida and Abdusalam Abubakar to intimate them of what was happening in the party and why they were insisting on internal reforms and the need to refocus the party in line with the vision of the founding fathers.

The demands of the aggrieved governors are: that President Jonathan should not contest in 2015 based on earlier agreement; removal of Tukur as Chairman of PDP for lack of transparency and his autocratic tendencies; reinstatement of Governor Amaehi as a member of PDP; returning the party structures to the governors in states where the executive committees were dissolved, and reinstatement of Prince Olagunsoye Oyinlola as PDP National Secretary following the Appeal Court ruling.

While the President was dragging feet over peace talk with the members of the new PDP, Tukur on his part re- constituted the party’s national disciplinary committee to try the aggrieved members. The committee headed by Alhaji Umaru Dikko had summoned Baraje, Oyinlola, and Dr Sam Sam Jaja, the vice chairman of the group to appear before it.