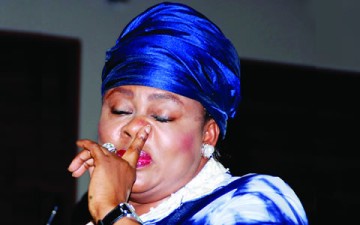 The Presidency and the leadership of the PDP seem to be moving in opposite directions over the fate of the embattled Aviation Minister, Stella Oduah, it was gathered yesterday.

The minister is under investigation over the purchase of two bulletproof vehicles by the Nigerian Civil Aviation Authority (NCAA) at a total cost of N255million.

The nation is currently awaiting the report of the Administrative Committee raised by President Goodluck Jonathan to probe the purchase.

Sources said that while the party hierarchy led by the national chairman, Alhaji Bamanga Tukur, is rooting for the minister’s removal if she is indicted by the report, some powerful forces in the presidency are working out a strategy to save her job.

The pro-Oduah forces are of the view that any action against her would rub off on the presidency and the party.

“As a politician, he is bound to take a deep look at his action before making any pronouncement,” a source said.

However, sources at the national secretariat of the PDP said the leadership of the party has told the president to weigh the implication of keeping the minister in office for the political fortune of the party ahead of the 2015 elections.

“Leaders of the party are of the opinion that the minister should be shown the way out if indicted. This is in line with our commitment to the anti-corruption stance of the current administration. There is no better way to show the world that PDP is opposed to corruption than doing the right thing in this case,” a party source said.

“I don’t know why the president is silent on the matter, but we are aware of efforts by some people to help her keep her job at all cost. But I can tell you that the leadership of the party is determined to oppose any decision on this matter that may tarnish the image of the party and we have told the president so.”

Speaking on the matter recently, the National Publicity Secretary of the PDP, Olisa Metuh, said the party is greatly worried by the scandal.

“We wish to assure Nigerians that whoever is found culpable shall reap in full, the bitter consequences of corruption and disservice to our dear nation. The position of our great party on corruption is unambiguous and our zero tolerance for corrupt practices abound in practical examples because our founding fathers placed utmost premium on transparent and accountable government as a fulcrum for achieving a Nigeria of our dream,” Metuh said.