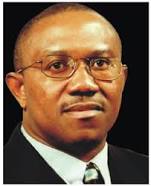 Anambra State Governor, Peter Obi, on Monday declared that there was no rigging in the state governorship election held on November 16.

Speaking with State House correspondent at the Presidential Villa, Abuja, he maintained that the All Progressive Grand Alliance (APGA) candidate will win the election if it is conducted 10 separate times in the state.

He said: “Let me tell you, in the election in Anambra State, I can go to anywhere as a Christian and tell you there was no rigging in the election. Those who wanted to rig were prevented from rigging and they are crying.

“Go to the people of Anambra State, if you repeat that election 10 times, they will never win. What are they even talking about cancellation? The regulation, the rules or the law says that you have to win at least 25 per cent in two-third of the local governments. Only APGA can boast of that, we won in 18 local governments.

“The nearest, which is the Peoples Democratic Party, won in nine local governments, the All Progressive Congress won seven. And I can tell you that even those results they are shouting about their own are even more doubtful. Everything for APGA is real.

“I cannot be part of rigging, I don’t have money to pay for people. You know those who spent money and I am not one of them.”