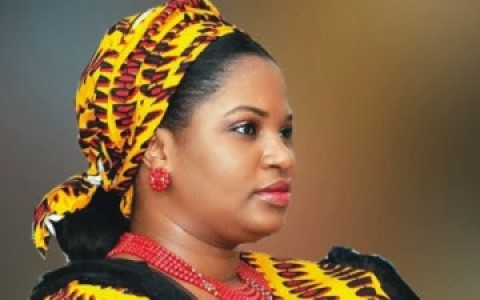 The news came to everyone rather surreptitiously. The governor of Enugu State, Sullivan Chime, reportedly detained the first lady. The image was unsavoury: a governor, in his hectoring majesty, ordering the security aides to corral Clara. The image takes on more dramatic hue as we imagine the screaming first lady pinned down, her hands wrapped around her back, forced either to sit down or lie down, her clothes out of joint, before the doors are locked against her.

This contradicts the temperament and powers of first ladies. First ladies often pin down their men, extract special favours and sometimes ride more glorious convoys than their husbands. Quite often, aides fear them more than their husbands. A person can be fired but a soft word from the first lady can redeem the job. Even when the governor confesses a special softness for an aide, the first lady who shares a contrary standpoint could reverse the affection. She could make life so difficult for that aide and the governor that her triumph is a foregone conclusion.

She is the prop, whisper and, sometimes, bully behind the throne, the pillow-talk queen. That made it quite difficult for many to digest the narrative of a humiliated power dame. But some who had followed the story of Governor Chime had observed some traits counterintuitive to this picture of governor-first lady relationship.

We remember Chime ushering in the New Year with stories of his failure to let anyone know if he was sick and why he would not convey, in simple language, why he could not communicate with the people of the state. The people who voted him into power knew nothing about the person they voted for, whether he was alive or dead. Consequently, the rumour mills buzzed, and depending on who you asked, they said Governor Chime suffered from one illness or another. Imagination overthrew reality.

He never loved the media, and saw any reporter or editor as a predator in his holy of holies. In his recent press briefing, he said he did not hate the media but he had issues with them because when he was ill, some newspapers reported his death. No excuse for newspapers that soared on fiction. It was irresponsible, especially on a delicate matter like death. But Governor Chime fertilised errant imagination by not providing facts as the first information officer of the state. He never saw his own shortcomings. He only saw others’.

Chime only recently knocked down the building of the Mountain of Fire and Miracles Ministries in his state against court orders. Is that not impunity? Does the law matter to the man who defies a court order? Again, he tried to resolve issues he had with university lecturers by unleashing dogs after them.

Against these news reports, some members of the public had judged the governor as Clara’s predator. But then, he organised a press briefing, and the governor said that his wife was afflicted by mental illness, and he had to restrain her to keep her from ridicule. She was present at the occasion, as well as her present doctor, Aham Agumoh, as well as Clara’s brother.

Governor Chime tried to paint himself as the husband and protector. And not a few people were impressed. But humans rights lawyer Femi Falana (SAN) has been pushing a different narrative. He said the woman had hired him as her attorney. But the woman had said that she did not hire Falana in the open interview. Yet, a letter leaked to the media that she had contacted a certain chief whom she wanted to contact Falana on her behalf. She admitted in the interview that her letter leaked. That corroborates Falana’s position that she wanted his help. The reporters did not ask Clara Chime why she wrote the letter and whether she insisted on the contents. I contacted Falana and he said Clara’s mother told him to help free her daughter from the grasp of the governor. He also said the woman asked him if she sounded like somebody who was mentally disturbed.

Two important developments bear investigation. One, why did she ask for a different doctor, and why did she have to scream for the matter to be brought to the fore? The same doctor appeared in the press briefing. Was he supposed to appear there, according to his professional oath, even if the governor wanted to clear his image as a wife bully? Yet, she accepted in the open press briefing that Dr. Agumoh was her doctor, the same doctor she wanted replaced.

The other question is, did Clara act under duress in the press briefing? What did they discuss with her when they took her away from the media for several minutes?

What are the details of the doctor’s treatment that have riled even members of her family? Tony Igwe, Clara’s brother, may not have represented other members of the family given the fact that the members object to the present treatment of their daughter. This was clear in the intervention of the National Human Rights Commission. Both Chime’s and Clara’s families did not agree on how her matter was being handled. Could it be that her so-called mental condition is exaggerated? She described her state as nervous breakdown.

If her situation is not as bad, then is Chime along with Dr. Agumoh not acting like Dr. Bero in Soyinka’s play, Madness and Specialists, where the specialist becomes in a sense guilty of what the patient allegedly suffers? German philosopher Friedrich Nietzsche wrote: “There is always some madness in love. There is also always some reason in madness.” Is it a case of too much love, which itself can injure, or violated love? Shakespeare calls it “cold fire,” “wolvish-ravening lamb,” or “fiend angelical.” Is Clara a victim of love?

It is always a delicate matter in psychiatry not to over-treat a case or it may itself pass as madness. That was the case in Achebe’s short story, The Madman, when a sane man of high nobility, with no clothes on, pursues a madman, who stole the sane man’s clothes, into the market place. We cannot just forget that the Soviet Union established asylums for dissidents.

In one breath, the NHRC agreed with a diagnosis and, in another, set up a committee to examine her true state of health. The NHRC said Clara had access to her son and keys to the apartments, but it had no knowledge whether or not that is a recent development prompted by her outcry. The NHRC’s retraction was an afterthought. It has compromised its integrity as a body.

This has been happening for all of four months, and Governor Chime’s desperate press conference was not actuated by any chivalry but a necessity to save his name. It is not so much that he is interested in transparency.

When he was flown out of the country, he did not believe in transparency then. He owes Enugu State citizens as well as Nigerians explanations for keeping the matter under wraps while he was abroad. His illness was more important to Nigerians and Enugu State citizens than that of his wife. The health of a whole state hung on him as the carrier of their mandate. No one voted in Clara Chime.

It was wrong, and even wrong-headed to present himself as a latter-day convert to the doctrine of transparency. May be he is not a convert. He was just pushed to the corner by the cries of the media and the fulminations of Falana. So he acted not out of conscience but necessity. So, he is not Clara’s hero.