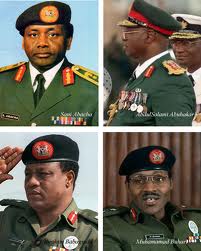 In another “danfo” bus ride, talk gravitated to the military. The verdict, actually more like an audit, was that military incursion into Nigeria’s political space has had a largely adverse effect. Someone said that despite the view expressed by former Eastern Nigerian Governor, Chukwuemeka Odumegwu-Ojukwu, that there was some kind of federal character among the rank of the first batch of coup plotters, and their victims, “Operation Damisa” seemed like an Igbo enterprise. Never mind that Major Chukwuma Kaduna Nzeogwu, leader of the coup plotters, was from Mid-West, Atom Kpera was from the North and Adewale Ademoyega was from the West. It made no difference that Col. Arthur Unegbe, from the East was also a victim, like Festus Okotie-Eboh, from the Mid-West, Samuel Akintola, from the West, and both Abubakar Tafawa Balewa and Ahmadu Bello, from the North. Most of the operatives of the coup were Igbo, and somehow, senior Igbo politicians such as Nnamdi Azikiwe and Michael Okpara escaped the slaughter.

Another person argued that, unlike Robin Hood and his band, those of the Nigerian military, who held political office, did not pass the gravy around. After assuming maximum powers, they became just as corrupt as the civilians they had come to replace. Someone referred to the “pig oligarchy” of George Orwell’s “Animal Farm,” who soon began to look like the human beings that they had come to replace. Indeed, out of the 12 state military governors in the Gen. Yakubu Gowon administration, only two, Brig.-Gen. Oluwole Rotimi and Mobolaji Johnson, were absolved of corruption and abuse of office. If you check, you will likely see that many military officers that held political offices (except for the Larry Koinyans) came out very rich. Many have substantial holdings in banks, oil blocks, shipping lines, construction firms and government contractors. One got so rich, he publicly declared that he didn’t know what to do with his money.

Someone argued that not all rich military officers stole public funds. He suggested that some merely diverted security funds to personal use. He argued that governors had absolute discretion on how security funds were disbursed, and there were no statutory requirements for accountability. Well. Someone countered that no one could really prove any such diversions, and that if there was any such diversion, it was a breach of the constitution, and so it should be reported and appropriately dealt with. Such funds, he concluded, should be returned to government coffers. Those familiar with recent politics of Oyo State may chuckle as they recall the many comical skirmishes between the late “commander of the Ibadan political garrison,” Alhaji Lamidi Adedibu, and the civilian governors that he successfully installed. Adedibu used to insist that the security vote must be spent, but through his private office.

The first speaker insisted that the military’s greatest fault was that it stunted Nigeria’s democratic process. He claimed it brought intellectuals with disparate political philosophies and world views into government, and so ended up with incoherent programmes, a patchwork of individual thoughts and preferences. None of the officers who went into political office espoused any political ideologies, despite the accusation by failed coup plotter, Col. Bukar Sukar Dimka, that moderate, if not conservative Gen. Murtala Muhammed’s administration was tending toward socialism. If any Nigerian military officer had any political tendencies, it was to their ethnic groups. The lack of a coherent political ideology led to a tendency for successor governments to abandon the programmes of their predecessors. The military government of Maj.-Gen. Muhammadu Buhari, derailed the laudable Lagos Metroline project because it was initiated by a government it had come to replace. Civilian governments now exhibit such tendencies. President Goodluck Jonathan disowned a 2009  agreement entered into between the Academic Staff Union of Nigerian Universities and the Yar ‘Adua Administration, of which he was Vice-President.

The most evident and brazen of the policies of the military which did not favour the polity was the subversion of federalism and the installation of a highly centralised political system. It stifled initiative and reduced the hitherto buoyant regional governments to perpetual carrying of beggar-bowls to the Federal Government every month. The military embarked on a massive purge that depleted the ranks, the moral and technical expertise of the Nigerian civil service. The irony is that those who were sacked came back as contractors to those same offices – to connive with their erstwhile colleagues to steal government money. There were allegations that Stores Receipt Vouchers were often written for goods that were never supplied into the store.

Politicians of the First Republic thought that government must control the commanding heights of commerce and industry. They seemed to have agreed with political theoreticians of that time that Nigerians could not muster the finance, the savvy and the technology to run such projects. Therefore, only the government and foreign investors operated the mining, manufacturing and service industries such as insurance, advertising, marketing, distribution and haulage companies. While governments operated the steel mills, the electricity corporations and the telephone companies, foreign investors ran the oil industries, the major conglomerates and the banks. Only the very rare Nigerians like Chief Adeola Odutola had their own manufacturing factories. But the military soon put a spanner in the works. They introduced an Indigenisation Decree that scared away the foreign investors, allegedly favoured South-West Nigeria.

The poor economic policies, wild and profligate spending, and the criminal neglect of infrastructure soon punctured the gains from the Indigenisation Decree. Many of the companies either collapsed, shrank or were merged with more viable enterprises. Some of the conglomerates have slipped so much, they now fetch up in real estate and quick service franchises.

Suddenly, the bus driver, who had seemed uninterested and unconcerned about the whole discussion, suddenly came alive and gave what seemed like a verdict: “If the military had just restored peace after the mayhem that followed the rigging of the 1965 Western Region elections and had returned to the barracks, it would have been wonderful.” He added: “Those ex-military officers, now holding visible public offices in this democratic dispensation, have a golden opportunity to correct the wrong image cut by their predecessors. Those of them currently behaving badly either as political party officials or government office holders must caution themselves. They cannot ride us as soldiers and come to ride us as politicians.”