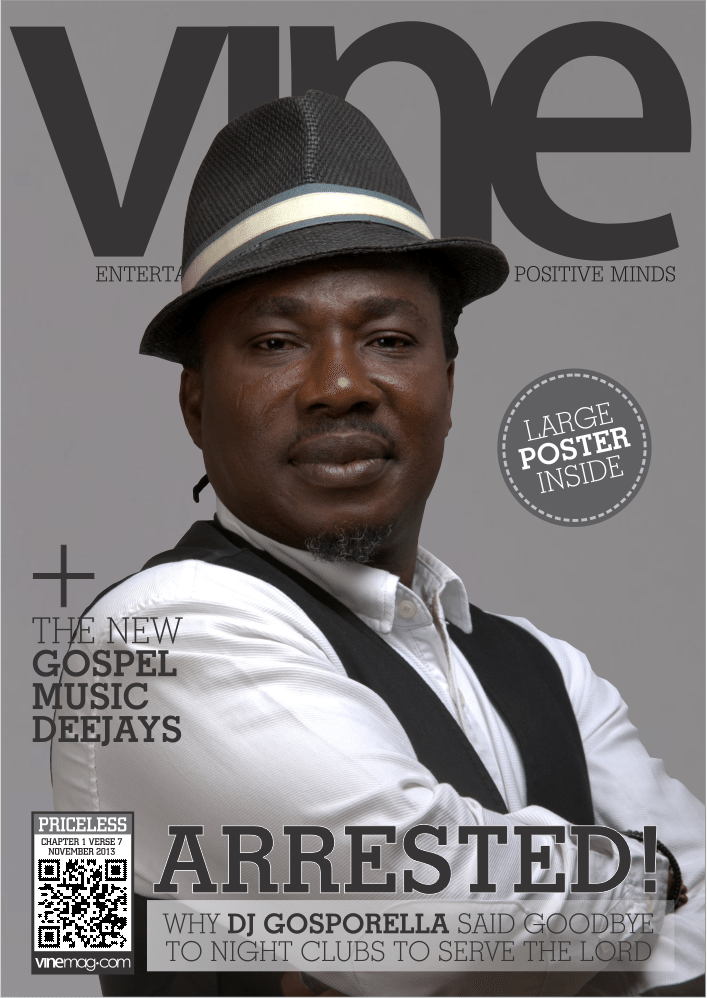 Gospel music’s pioneer disc jockey, DJ Gosporella, is on the cover of the November ‘Deejays Edition’ of Vine Magazine, the entertainment and lifestyle magazine for young positive minds.

According to ‘Seun Salami, Editor of Vine, this edition is “dedicated to celebrating disc jockeys who represent an aspect of Christian entertainment that doesn’t usually take the front row but is just as essential and praiseworthy as the artistes and performers.”

DJ Gosporella shares the story of his metamorphosis from the secular DJ Alfred Campbell to DJ Gosporella over a decade ago and how the decision to leave the nightclubs to become a gospel deejay took him three years to finally accept even after according to him, “hearing God’s voice clearly.”

The forty-eight year old disc jockey also took a retrospective look at his career over the last ten years as a gospel DJ and the last twenty-seven years in the industry, saying there is simply no comparison between gospel and secular music, referring to the former as “the higher life”, while advising gospel music ministers and artistes about the best way to place value on their music in order to command commensurate financial value.

This edition also features ‘the new deejays of gospel music’, represented by the likes of DJ Acube and DJ Express IT who speak about their foray into gospel music deejaying as well as the prospects and challenges of their chosen careers.

Now in its seventh edition in print, Vine Magazine, the entertainment and lifestyle magazine for young positive minds, has been distributed FREE over the last four months at major youth churches around the city of Lagos and environs as well as major events and gospel gigs throughout each month.

Free downloadable editions of the magazine will also be available (to subscribers only) from December. For more details on how to subscribe or get copies of the magazine, visit www.vinemag.com or follow @VineTheMagazine on twitter.

Make up by Redefinition Makeovers