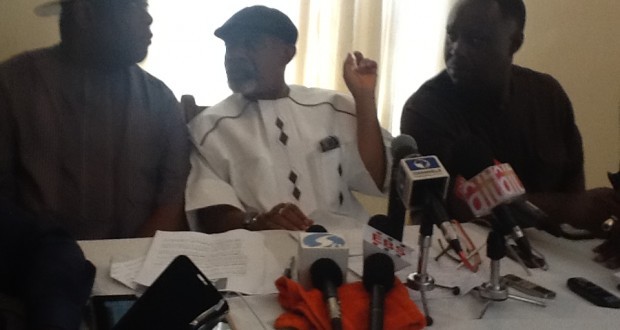 The All Progressives Congress (APC) candidate in the Anambra State governorship election, Dr. Chris Ngige, has described the election which took place on Saturday in the state as a mockery of democracy.

At a world press conference which he addressed Sunday morning in Awka, capital of the state, Ngige said the exercise was “systematically and scientifically rigged.”

“It is unfortunate, we are toying with the future. We are destroying the hope of those coming behind. Our children will one day rise up and ask why they were born in this part of the world. I weep for Nigeria. This generation has decided not to bequeath anything good to coming generations, “he stated.

He said from what the Independent National Electoral Commission (INEC) has done, it has taken a step forward and three backwards. He alleged that the irregularities that characterized the 2010 governorship election through the manipulation of the voters register, delay of materials to strongholds of particular candidates, restriction of results sheets and use of violence were repeated on Saturday.

He rejected the rerun in the 65 units in Obosi, saying it was the height of disregard for God and the faith of the people to fix election on a day of worship. He wondered if any election would be fixed on a Friday at 1.00 pm in any northern state of the country.

Ngige hinted that the APC may subsequently ask for a total cancellation of the whole exercise given that the issue of manipulated voters’ register was noticed throughout the state.

He also said the APC will explore the legal options open to it in the Electoral Act as amended to seek redress.

“Nobody knows where we will go to from here in 2015. As it is, we will ask for a total cancellation of the entire exercise giving the degree of fraud, especially the question of result sheets not being sent with other sensitive materials. There is provision for us to seek redress from the Tribunal to the Appeal Court down to the Supreme Court and we will take full advantage of this,” he said.