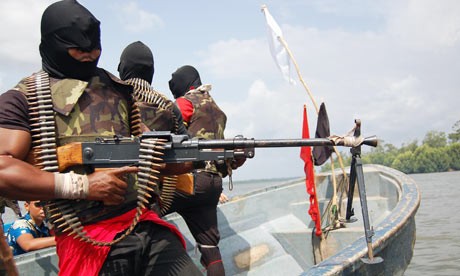 There is a Yoruba proverb that says that the same act that brought one honour, if overdone, brings disrepute. It aptly captures the story of Kelvin Prosper Oniarah, the so-called Delta State’s “most-wanted” kidnapper who was recently arrested by security agents. What snagged Kelvin, ironically, was not his criminality but his over-dance to a music that had long stopped, and resumed an elegiac tune.

Kelvin, an indigene of Kokori in Delta State and a self-anointed leader of the Liberation Movement for the Urhobo People, some weeks back, gave President Goodluck Jonathan a 60-day ultimatum to both address the sufferings of the Urhobo people and grant amnesty to kidnappers or face attacks on oil facilities in the area.

Those lines – and the entire staging of his valour — were familiar to the point of tedium. The pictures that accompanied Kelvin’s news report also spoke hollow volumes. There were eight men captured in the image, dressed in camouflage uniforms and in mufti. The men were armed with AK 47 rifles and their faces were masked. You could tell they were trying to achieve mystification through anonymity.

Kelvin, surrounded by Kokori indigenes — mostly women — announced his threats to the world. His stage props included his community elders who lent their flyweight to their freedom-fighting son. He mouthed the perennial list of Niger Delta whine: the oil is theirs; the oil feeds Nigeria; unlike the rest of Nigeria, they are deprived from drinking the oil; as a result, they are going to fight to finish and bla bla blah! It’s hard to blame Kelvin. Having seen how well off other amnestied fighters have become, he tried to pass off the same worn script.

A week later, he was apprehended.

The Nigerian state, seemingly, was not impressed with his overreach by challenging the President. With the 2015 elections on the way, it would be a tactical error to start accommodating entrepreneurs of blackmail like Kelvin. The moral of Kelvin’s arrest, however, is either that the instrumentality of violence as negotiating access into political corridors and crevices no longer sells, or it needs amplification to a ginormous level to make a resounding impact. However, what is not easily conclusive is whether one option or the other will augur well for the long-suffering earth, and peoples of the Niger Delta.

The horrors of environmental degradation in that region are well-documented and need no retelling. Indeed, a lot of damage has been done to the place and while certain communities have attained enough sophistication to employ means of legal redress either in Nigeria or outside our shores, some others are still languishing and remaining “marginalised” in the scheme of things.

In the past, violence had been successfully employed as a political agent to garner attention and grant access for militants who self-labelled as radicals but have now become fully absorbed into the same circuit of power they once challenged. After they broke through the force field, they became power brokers and the edges of their agitation for the liberation of the tortured region blunted.

Today, someone like Asari-Dokubo has practically become a state “bullhorn,” howling at the top of his voice about how he would collapse the pillars of Nigeria on our heads if President Jonathan is not re-elected. He neither agitates against the resource “curse” nor remembers the “cause.”  Like most other militants, he has probably retired the kiln where his career was forged. It is no longer about improving the material conditions of the region but how they breed an army that will stampede Nigeria if Jonathan is not re-elected.

Asari-Dokubo and his threat, by the way, should scare no one. If Jonathan fails in 2015, none of those turncoat rebels will undermine possibility of a lucrative relationship with the new president simply because of Jonathan.

Their agitation is not about Jonathan or entirely about the political project he represents and that is why their activism shape shifts whenever the scent of crisp dollar notes is run under their noses. Today, the best they do is to be some pretend-Robin Hoods; feeding their people the crumbs they hustled from the crumbs that fell off the Master’s table.

In the past, Kelvin and his army of the wretched-of-the-earth would have elicited sympathy but the times have changed and the world has seen through the façade of militancy in the Niger Delta. There was a time in Nigeria when “statesmen” like Chief Edwin Clark yelled “marginalisation” and we were compelled by guilt to listen.

Mentions of names such as Isaac Adaka Boro and Ken Saro-Wiwa were enough to evoke feelings of shame in us. But that is largely in the past now, no thanks to their own “activists” and ‘’statesmen’’ who have shown us that given the chance, they are as willing to despoil their land for gains as anyone else.

The losers in all these are folk like the people of Kokori. They are cannon fodder and they shall not be free. Their problems will persist until they stop accepting settlement in place of true liberation.

The Amnesty programme, the Ministry of the Niger Delta Affairs, 13 per cent derivation, and the Jonathan Presidency, have largely turned out to be pacifiers pushed into their mouths by a state that has no respect for masses’ suffering.

The Amnesty is, in retrospect, one tactical error that changed the moral coloration of the Niger Delta cause. By accepting “amnesty,” they also acknowledged they were the offenders. This renaming shifted their cause from militants who use offence as a means to an end, to militants for whom offence is both a means and an end. (Chinua Achebe’s The Education of a British Protected Child has a chapter on the power of naming. He warns that one must never allow one’s name to be defined by adversaries. It is a lesson the freedom fighters should take to heart). They were tactically renamed and they live up to it.

Maybe, they did not quite have a choice but to accept Amnesty then, but the moment everyone began to troop out, even giving up weapons that are not theirs, and presenting themselves as criminals who needed to be reformed and placed on some short-term salaries, something was lost. They became like the proverbial Esau who allowed raging hunger to cloud his vision. They sold themselves for a mess of pottage.