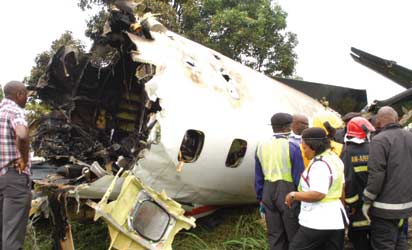 November 7, 1996 – A Nigerian ADC (Aviation Development Corporation) Airline Boeing 727-231 flying from Port Harcourt to Lagos with 142 passengers and nine crew members crashed on landing, plunging into a lagoon with all on board killed.

October 22, 2005 – A Nigerian Bellview Airlines Boeing 737 airliner with 117 people on board crashed and disintegrated in flames shortly after take-off from Lagos. All on board killed.

December 10, 2005 – A Nigerian Sosoliso Airlines DC-9 crashed in Port Harcourt, killing all 103 on board. Most on board were school children going home for Christmas.

June 3, 2012 – A Dana Airlines Flight 9J 992 carrying 153 passengers on board crashed at a residential area of Iju-Ishaga, Lagos. No one survived the crash.

However, between 2007 and 2011, Nigeria did not record any major plane crash for five years. except for the charter aircraft, Beechcraft 1900D, which disappeared on March 15, 2008 on its way from Lagos. The wreckage of the plane was discovered six months later with the corpses of the three persons on board.