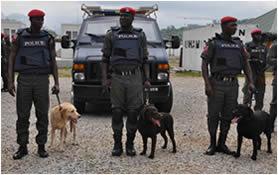 Rivers State Governor Chibuike Amaechi has no reason to complain about police security because he has enough men to protect him, Police Commissioner Mbu Joseph Mbu said yesterday.

Amaechi has been saying that his police protection unit has been depleted by the police chief, adding that he is exposed to attacks.

But yesterday in Port Harcourt, Mbu said no fewer than 287 men are attached to the governor and the Government House.

The government, however, faulted Mbu’s claim.

Mbu, who spoke through Rivers Police spokesman Ahmad K. Mohammad, said the 287 officers and men attached to Amaechi, were on shift duties.

According to him, they include 18 men from the Counter Terrorism Unit (CTU) and 18 from the Swift Operation Squad (SOS). He said three Armoured Personnel Carriers (APCs) are stationed at the front and back gates of the Government House.

The police said Amaechi’s Chief of Staff Tony Okocha is not qualified to have police protection. He said Secretary to the State Government Georhe Feyii, by virtue of his position, is qualified to have a police orderly, which he enjoys.

The police chief urged the public to disregard Okocha’s allegations and complaints about the withdrawal of his police security, saying it was one of his endless strategies to score cheap popularity and whip up public sentiment against the police.

He reaffirmed the police’s commitment to ensuring that lives and property of all residents were protected, including that of the governor.

Okocha, last week, raised the alarm that the policemen had been withdrawn from his residence and that of the Secretary to the State Government (SSG) without notice.

The police said five policemen were attached to Okocha and Feyii – as a privilege and not a right.

According to the police chief, the policy does not provide for any police security for the Chief of Staff, but the SSG is entitled to just one orderly.

The police spokesman said: “The Rivers State Police Command hereby reacts to the recent outcry by Chief Tony Okocha, the Chief of Staff, Government House, Rivers state, in his endless attempts to score cheap popularity and whip up public sentiments, that policemen invaded and broke into his house and withdrew some policemen attached to him. The command wishes to state categorically that there was no such incident and that the statement was false and misleading.

“Going by the existing circular from the police authority, the Chief of Staff is not entitled to police orderly or guard.

“However, for the avoidance of doubt, the Secretary to the State Government is only entitled to one police orderly.

“The command wishes to further reaffirm its continued protection of His Excellency, Rt, Hon. Chibuike Rotimi Amaechi(CON), the Executive Governor of Rivers State.

“The command furthermore wishes to draw the attention of the members of the public to these facts and to dismiss and regard such outcry as misleading and false.”

Also, the wife of the deputy governor moves with 12 police escorts. The SSG had five, the Chief of Staff also had five while a total of 109 policemen guard the State House front and back in alternate arrangement.

The statement added that 10 men of the Anti-Bomb Squad and 10 State Intelligence Bureau (SIB) were part of the government’s security arrangements, but noted that the governor rejected the SIB personnel.

Okocha said: “The CP has a way of covering his wrongdoings with lies.

“if a public officer of my status is not entitled to police officers, so be it. The CP is sinister in mind and he knows the implication of his actions.

“I intercepted the SPU signal in Port Harcourt directing police personnel in my escort and guard duties be withdrawn, leaving only an orderly.