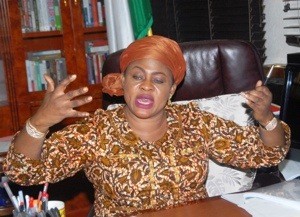 The embattled Minister of Aviation, Ms Stella Oduah, has been linked to    another car purchase scandal.

This time, Oduah is said to have also approved the procurement  of two Lexus Limousine cars and two Toyota Prado jeeps.

The minister  is expected to appear before the House Committee on Aviation which is investigating the purchase of two  BMW bulletproof  cars for her by the Nigerian Civil  Aviation Authority at N255m.

But during the sitting by the Senate Committee on Aviation which is probing the crisis in the Aviation industry, the   Managing  Director of the Federal Airports Authority of Nigeria , Mr. George Uriesi,  said the  Lexus Limousine cars and Toyota Prado jeeps were in the custody of a bank.

Uriesi, who   said the limousines were bought  for  N60m each , added that  he did not have details of the cost of the Prado jeeps.

He explained that the bank whose name he did not give,    funded the purchase of the four vehicles.

The FAAN  chief told the six-member committee that  while Oduah gave the approval, somebody whose  name  he failed to mention, signed on his (Uriesi) behalf.

An obviously enraged Chairman of the Senate Committee on Aviation, Mr. Hope Uzodinma, lambasted  him  for receiving approval from the minister instead of the Federal Executive Council.

He was therefore ordered to  appear again before the committee on Monday with details of the transactions.

Uriesi, who was  said to have   sweated  in the air-conditioned room while the session lasted, was   also asked to bring along with him,  details of other vehicles   bought for  the agency’s  directors.

Meanwhile, members of the House of Representatives Committee on Aviation are set to  quiz  Oduah on Wednesday(today) over the controversial bulletproof  cars.

The minister, who  was  summoned  by the committee to appear before it on Tuesday, had written ,  explaining that she had travelled to Israel to sign the Bilateral Air Service Agreement between Nigeria  and Israel.

On Monday, the committee  headed by Mrs.  Nkeiruka Onyejeocha, said Oduah would  now appear on Wednesday and not  Tuesday as ealier scheduled.

It claimed that  the decision was to give all stakeholders the opportunity to prepare their documents.

But the   committee    warned that it would not hesitate to take necessary actions against Oduah if she failed to turn up today (Wednesday).

As of  10pm on Tuesday, it was unclear if Oduah, who was on Monday accused by  the  House Committee on Public Procurement of shunning similar invitations 12 times, had returned from Israel.

As part of its preparations for the hearing,  a five-member sub-committee of the Onyejeocha-led Aviation panel  on Tuesday discreetly inspected the controversial bulletproof  cars at   the Nnamdi Azikiwe International Airport, Abuja.

A source privy to the visit, informed The PUNCH that the aim was to “truly establish that the cars were bought.”

The source added, “This is an investigation and you do not leave anything to chance.

“The idea of the inspection team was to go to the location and physically see the cars.

“All these will form part of the final report to the House.”

When   contacted, Onyejeocha    confirmed that a team visited the airport to inspect the cars.

She, however, parried questions on the details of what the team saw.

The committee chairman  said, “Yes, it is true that we set up a committee to go and inspect the cars.

“The committee went to the airport but they have not reported back to us.

“If you are interested, come to the hearing tomorrow, please, PUNCH.”

A senior official of the NCAA, who accompanied the sub-committee to the airport  said the lawmakers “saw the two bulletproof cars .”

The source added, “They   were satisfied. Some of them even stated that people were beginning to insinuate that  there were no cars. So, I think people can now ask the House members whether there are cars or not.”

Asked if  the committee members  were also shown the limousines parked at the Total Radar Coverage of Nigeria site at the airport, the official said, “I don’t like joining issues, because people are beginning to write what they like.

“The cars we are talking about here are the bulletproof cars and not limousines.”

The House spokesman, Zakari Mohammed, said sanctions that could be imposed on Oduah if she failed to appear before the Aviation committee included issuing a bench warrant to facilitate her arrest.

He said, “What the committee will do is to apply to the Speaker (Mr. Aminu Tambuwal) for a bench warrant to be issued for her arrest.

“Once that is done and the speaker approves it, the Inspector-General of Police will be directed to arrest her and bring her before the committee.”