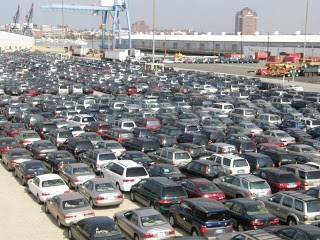 The Director-General, National Automotive Council, Alhaji Aminu Jalal, said on Tuesday that the country spent about N1.2tn on the importation of various brands of vehicles last year.

Jalal, who led an eight-member Board of the NAC to the Peugeot Automobile of Nigeria in Kaduna, noted that the vehicles were imported by the three tiers of government, private corporate organisations as well as individuals.

According to the DG, the breakdown shows that N550bn worth of vehicles; N500bn spare parts and N150bn worth of tyres were brought into the country.

This, he added, had over the years stifled the economy as the country’s vehicle assembly plants lost patronage.

Jalal said, “I want to tell you that last year alone, this country spent N550bn on the importation of cars, buses and trucks. But that does not include tractors and military vehicles. Again, we also spent around N500bn on spare parts. In fact, on tyres alone, we spent N150bn. And this year, the same trend is showing.

“This is not good for our country. With the new policy, we are going to support our car plants to produce very standard cars at globally competitive prices. This is going to greatly add to our local content. For example, to assemble a car here, you need about 2,500 parts.

“If many cars are produced and sold here, then it would encourage the local manufacturing of these parts, creating more wealth here and driving down the cost of the vehicles. By the time we start implementing this policy, you will see a very impressive positive change in just six months.”

The Chairman, NAC, Alhaji Abdulkadir Saleh, gave an assurance that the new board would strictly implement the new automobile policy to ensure that locally assembled vehicles were patronised.

He said the government had no option than to fully implement the new policy and ensure that all tiers of government patronised locally assembled vehicles.

Saleh added that under the new policy, Toyota and Nissan would build plants in Nigeria.

Earlier, the Managing Director, PAN, Alhaji Ibrahim Boyi, had told members of the NAC Board that the company, with 4,000 permanent workers and producing no fewer than 90,000 cars in 1985, was now producing 3,000 cars annually with a staff strength of 250.

Boyi argued that with the full implementation of the New Automotive Policy, the company would bounce back.

He appealed to members of the Board of NAC not to relent in the full implementation of the new auto development plan in order to protect the current and future investments by local manufacturing plants in the country.

The PAN managing director also urged the NAC to support the location of one of the proposed automotive suppliers parks and Clusters within the premises of the company in order to optimise existing resources and fast track the implementation of the local content development plans.

Boyi said, “In the mid 1980s and early 1990s, we were doing very well. In 1985, we produced 90,000 cars. Government policy was very favourable then. But after that, the environment became very bad as all kinds of vehicles started coming into the country.

“Today, we produce between 25 and 30 cars only during working days. Our workforce of 4,000 in the 1980s is now 250. We are hoping that the situation will change because we have put in every modern facility and forged the right international technical partnership to succeed.”