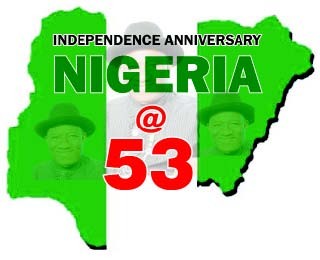 As Nigeria celebrates her 53rd anniversary as an independent nation this week, I decided to stay away from issues. I literally gave up my addiction for the internet; well not more than twelve hours so as not to be led into temptation. I expected a sober mood where everyone would take stock of the past and present events in the history of this nation. From civilian leadership who just wanted power for the sake of it, to military khakis who felt they were doing Nigerians a favour by ruining things, then back again to civilian dictators who came for the “good of all” (well all the people that can make them retain power and loot the treasury).

Nigeria has passed through hell; the hell of terrible leadership, the bigger hell of clueless followers and of course the hell of unhidden lust for power and all it can bring depraved minds. Everyone is a law to himself till he steps on the toes of powers that be, and then the full wrath of their law is unleashed. The masses often times are too confused or too absorbed by their plight they cannot stand for a change and those who stand are derided for their effort labelling them as jobless and misguided. Innocent citizens are maimed in cold blood under the watch of security agencies and no one gets to put pen to the paper of his resignation.

I decided never to celebrate the Nigerian independence again until the Nigerian people are truly independent as I cannot see what is happy about our present position. Nigeria imports virtually everything even in recent times “human beings” in the name of “expatriates”. How do we merry when more than 90 citizens lost their lives and the tears is still rolling on the cheeks of their families. Why should we celebrate when about 60percent of the future of this country is gripped with unforgivable unemployment and ASUU strike is months old and our President pushed the blame and his responsibility to opposition parties. I think it takes a normal person to take my stand but in the face of all these do we know who is still normal.

Adekunle Smith is a law graduate and writer. You can reach him through kunle_smithboy@yahoo.com