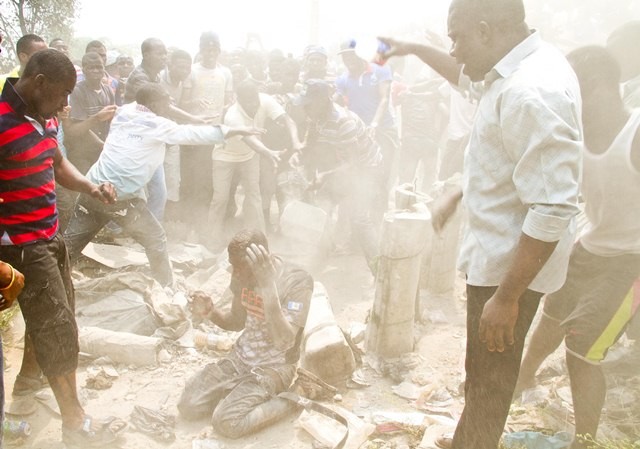 It took plenty of guts for me to finish watching this very barbaric video on YouTube. This video sent chills down my spine, that I started wondering what kind of people God put in Nigeria.  A twelve year old boy, Samuel ,was beaten to almost a pulp and burnt alive by a senseless mob. Yes, that was not a typo, a 12 year old boy it was that was burnt to death in Nigeria.

‘’Bring him lets go and kill him’’ I heard from the background of the video. He was briefly interrogated by God knows who, before he was killed.

According to little Samuel, his parents were always in one fight or the other all through their marriage which led to his father sending his mother, him and his siblings out of the house. They made their way to his uncle’s house who also sent them packing after a while because they were always bed wetting. They looked for where to lay their heads to no avail, until they found a ‘place’ under a bridge. With nothing to eat, his mum decided it was best for them to go begging so as to at least eat. It was while he was out begging on one of those days that he was  accused of trying to kidnap a child. He was apprehended and lynched.

Immediately the fuel was poured on his head and the match was struck, it almost brought tears to my eyes.

Sometime last month, a friend of mine posted a link on my face book timeline; it contained a link to the punch newspaper, where a young graduate and his friend were beaten to death because they were suspected to be thieves. A 25 year old undergraduate, who was not supposed to be where he was, were our universities not shut down (till today). According to reports there had been a robbery in the area four days earlier and some of the residents were on the lookout for strange faces. The youths of the area saw this lad and his friend, accosted(and accused) them, handcuffed them , one thing led to another and the boys were beaten to their early graves.

The jungle justice in ALUU is still fresh in our memory. There have been similar mob actions going on for a while in this country from Oshodi market to Potiskum.

It is so sad that in this 21st century jungle justice is still practiced in Nigeria. What sorts of people take pleasure in killing a child? What kind of society do we have here; where the poor derive pleasure in killing the poor? The real criminals are at the helm  and they are not even killing themselves for stealing your future.  What happens (in rare cases) is the thief gets a little jail term comes out and life goes on as if nothing happened. So why should we now kill for (most times) petty crimes-crimes that sometimes are not even confirmed?

I am not saying criminals should not be punished, but jungle justice?  No. It is wrong . We cannot continue to be the accusers, Jury and Judge! Even if these alleged crimes were truly committed, there are relevant authorities whose job it is to deal with them.

It is time we as a people thought about some of our actions and their implications. It is time we stopped being our own enemies. No one of us is able to create a life, why take one?

I know the government has a role to play in curbing this menace, but I think stopping this act depends to a large extent on us the people. I do not want to believe we are on a moral decline.

I know that illiteracy is one of the reasons why this jungle justice nonsense is on the rise but commonsense is supposed to come in to play. It is a fact that there are so many illiterates in this country. Those who know nothing about the law as well as the consequences of Mob justice.  I am sure that findings will show that those that are always in the fore front of this Jungle justice are largely illiterates. The level of education needs to be improved in Nigeria, yes we know, but common sense needs to come to play first.

Another reason why I think this BS is on the rise is that some people do not believe in the police system and its ability to uphold law and order, hence this barbaric act of taking laws into their hands. It is clear we need a reliable police system-one that can be trusted. Not a police that sometime gets to even encourage this act as we saw in the Aluu  case. Everybody knows this, but morality needs to come to play first. We need to fear God.

Unemployment is another factor that causes this barbarism. Unemployment rate in this clime is so alarming. In fact most of the people that get themselves involved in jungle justice are those who know nothing of the alleged crime in the first place. Jobless passersby who have been idle all day. Tackling unemployment is very necessary if we need to curb this menace. In fact bringing unemployment to its barest minimum will get to reduce criminal activities which lead to jungle justice. This is plain to see, but, this is no excuse to kill a fellow human !

The government is to blame for most of our sufferings here as governance has been so poor but in this(Jungle justice) case, we need to take a chunk of the blame and examine our acts.

We as a people need to think, reflect and realize that this jungle justice nonsense is correcting(?) wrong through a very wrong means. Two wrongs never make a right. We need to become better people. We need to realize that it is never a good thing to take another person’s life. There is no reason whatsoever for us to take laws into our hands as the laws of the land is by extension the law of God!

If you cannot create a life, please do not take one.