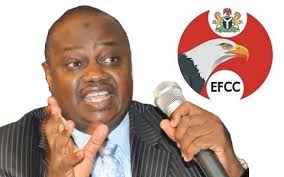 The newspaper headlines caught my attention of the Economic and Financial Crimes Commission being broke. I looked again to be sure that it was not a soft sell magazine that dwelt on sensationalism to peddle serious news. I was shocked to my bone marrow!

Ibrahim Lamorde, its helmsman said it could not afford to pay its legal practitioners who handled briefs for them. A popular program on television ‘zero tolerance’ which talked about the evils of the monster called corruption and steps to curb it had to be cancelled due to lack of funding.

Lamorde told the House of Representatives that he only got 51% of the budget amounting to 10.9 billion naira out of 21.8 billion was made available by the budget office. In a strange twist, Hon Leo Ogor, a member of the House picked holes in the utterance of the anti-corruption chief and opined that the entire budget was approved. This is not something to be taken lightly as two people cannot tell lies at the same time. A thorough investigation needs to be done to ascertain the claim and counter claim.

Corruption is a current global issue and it is been fought with the ferocity given to the fight against drugs, human trafficking and cyber crime. The jailing of former Delta State Governor, James Onanefe Ibori and the shameless escaping from the United Kingdom of former Governors Joshua Dariye and D.S.P Alameiyeseigha shows that the battle against the scourge is now being done via international collaboration. Funding should not be tied only to what the National Assembly approves. It could be sought from international donor agencies as it is now a core issue so as to avoid this needless embarrassment. The chairman should be someone of considerable international clout who can easily get foreign donor funding. The public is already enchanted with the activities of the agency as there is a large sincerity question mark. Independent funding could boost public confidence in this strategic government agency. If Nigeria could sign an extradition treaty with Britain for trials of alleged financial criminals, the issue of funding should be critically looked into. It is a positive step that some former public office holders who have corruption allegations cannot easily travel abroad. Some have even gotten a blacklist from some countries.

There is also the positive use of amnesty which can be positively deployed. A report by the global anti-corruption watchdog, Transparency International gave a damning report that $55 billion in looted funds were being held in the western financial system. A tax haven could be declared in the country for such funds to return which could be used to generate employment opportunities for the teeming number of unemployed, idle and angry youths. If the amnesty programme was done in the Niger Delta amidst its flaws and the government at a time tinkered with granting it to the dreaded Boko Haram sect, it is something which should be urgently looked into. The bitter reality is that corruption cannot be completely eradicated and it is idealistic to think that punishment is a sufficient deterrent. We just have to pander a bit to the harsh truth! Moreover Nigeria does not operate a welfare state. Pension funds have been known to be embezzled which rendered many aged retirees economically strangulated, many work in private establishments and don’t get paid at the end of the month with some having salary arrears, the take home pay of many Nigerians cannot take them home with the ever increasing rate of inflation which has defied all potent solutions to abate, we do not have a history of adequately rewarding selfless citizens. The case of the Super Eagles Coach, Stephen Okechukwu Keshi being owed 7 months’ salary arrears is a monumental scandal. This is a coach that broke the 19 year jinx to win the much coveted Nations Cup, won it as a player and was also captain of the team that went to the first world cup in 1994. What is the rationale behind naming a stadium after him when his stomach is singing different songs as a result of the biting pangs of hunger? Keshi may be a celebrity but there are many unsung heroes whose good deeds only earn them scorn and opprobrium. In the light of all these, corruption is an acceptable norm and the amnesty deal is a realistic way of dealing with it for now with the hope that the moral fibre and economic shelter evolves. The nexus between the individual and the state which is viewed as a no man’s land has to be properly linked before we can realistically talk about a zero tolerance against it. The present failed state we live in where every man is his own government does not provide any patriotic verve to treat public funds with care. The impact of the $55 billion dollars would have a ripple effect if it was repatriated home.

There also needs to be the divorce of political sentiments from prosecutions. Citizens need to see sincerity in the fight against the scourge. For instance, when the African Independent Television was under threat of going under in 2000, Nigerians donated to keep it alive because they had a bond with the people. That was citizen’s journalism at work. The same can be extended to the corruption fight. Public Spirited individuals could donate their resources discreetly to aid the agency if only they are convinced of its transparency. Our own version of the Arab Spring last year during the subsidy protest is a pointer that it can be a collective fight if the will is strong enough.