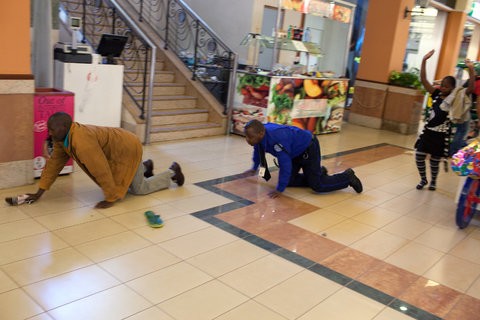 The world of terror as it seems, has no borders and Nigeria is an unwilling player. No thanks to the Boko Haram insurgency, Nigeria is now prominently placed among the league of countries troubled by agents of death.

The new trend in consumer shopping that had seen the rise of big shopping malls as against ordinary supermarkets in the country has also put Nigeria, especially our big cities on course to become mega cities just like any other anywhere in the world.

Now put the two, terror and shopping mall together and you get a picture of a dangerous world. A world of tears, sorrows and blood as exemplified by the weekend siege on Westgate Shopping Mall in Nairobi, Kenya by Somalia based Al Shabaab militants, a terrorist group linked to Al Qaeda that has left no fewer than 65 people dead.

The siege by the gunmen which began Saturday afternoon entered its third day yesterday as Kenyan Special Forces intensified efforts to clear the mall of the remaining militants and free the shoppers who are being held hostage by Al Shabaab.

The innocent shoppers, unaware of the danger lurking had gone to the mall for their usual purchases, while some, as expected, were there to window shop against possible future purchases. But when terror struck, they (rich and poor) were all bundled together by Al Shabaab and their fate firmly in the hands of the terrorists.

The shoppers were drawn from all over the world, not just Kenya. And this is understandable. Kenya is a favorite destination for tourists around the world and the country derives a large chunk of its revenue from tourism.

Next door Somalia is a haven for terrorists following several failed attempts to have a government in place after the fall of the last central government in Mogadishu led by President Siad Barre over two decades ago. Barre died years later in exile in Nigeria.

Instability in Somalia has been having a negative effect on tourists flow into Kenya and the country rightly took active interest in restoring stability to its neighbour. This include sending troops in 2011 to bolster support for the UN backed government in Mogadishu to the chagrin of Al Shabaab which views such interest as interference in internal affairs of Somalia. And Al Shabaab’s own way of teaching Kenya a lesson was to take terror to Nairobi, the Kenyan capital, and it chose to strike inside Westgate Shopping Mall, where it was sure to inflict maximum damage not only on Kenya but also the western world.

The identities of the masterminds of the attack could be shocking as there were speculations that no fewer than five US citizens and a British woman whose husband was one of the attackers in the 2005 terror assault on London, Samantha Lewthwaite, better known as the White Widow were involved.

As has become typical of all al Qaeda related terrorist attacks, religion and identities of the victims are secondary, what is of utmost importance is to cause death to as many people as possible just to prove a point that they are capable of causing chaos. All those talks about fighting the cause of Islam or wanting to create an Islamic state are just diversionary. All they are interested in is blood, and we have seen that in abundance here in Nigeria in the way Boko Haram has been carrying out its activities.

The terror attack at Westgate Shopping Mall should be of major concern to Nigeria in particular. Not because Nigerians or a Nigeria has been found to be involved either way, (which is not impossible), but because there are so many similarities to be drawn from that experience with Nigeria. Like Kenya (in east Africa) , Nigeria is a regional power and part of the international community trying to rid west Africa of terrorists mostly linked to Al Qaeda. At home we have Boko Haram which is linked to Al Shabaab and by implication Al Qaeda. Most important is the new trend among Nigerians to patronize big shopping malls that are daily springing up across the federation especially in our big cities. The Westgate experience could encourage Boko Haram to want to try out such here. How prepared are our security agencies to foil or combat such attempts here?

Drawing from the Kenyan experience which cannot be said to be a success yet, the lead agency spearheading the assault on Al Shabaab inside that mall was the Kenyan police. Can the Nigeria Police Force as it is today be entrusted with that task if it came to that here? This is not putting down the Nigeria Police but the fact today is that our policemen all ill-equipped, not well trained and improperly motivated to meet the challenges posed by terrorism as exemplified by Boko Haram to our country.

The Federal Government needs to rethink the way it is funding and equipping the police. Allocating peanuts to the police as if the officers and men of the Force are just our Maiguard is nothing but recipe for disaster. Worse still, even the bulk of the money allocated don’t get to Force Headquarters as and when due.

The other day the president was at the Police College in Ikeja after a local television station revealed the decay going on there, but after the noise from the presidency over the revelation, not much has been heard in the way of any improvement to the college.

The police high command also needs to revisit its recruitment policy, training and promotion to give preference to competence high and above the principle of federal character. The Police must also resist the temptation to allow the Force to be an instrument in the hands of politicians. If the institution is well funded, insulated from politics and serves the best interest of Nigeria, it would certainly attract the best Nigerian brains available in that area, and also enjoy public support.

As the shopping malls continue to multiply in Nigeria, it is about time a well planned and properly coordinated security measure is put in place to secure not just the facility but most importantly the lives of the shoppers. Nigeria cannot afford the Westgate experience. It would not be out of place to have a special protection unit of elite policemen created by the Nigeria Police Force for this purpose. Boko Haram has already put us in bad light around the world we should not give the terrorists an opportunity to make it worse.

And as the Nigerian government continues to discharge its international obligations in the fight against terror it should be mindful of the backlash and prepare adequately. A stitch in time saves nine, as the saying goes.