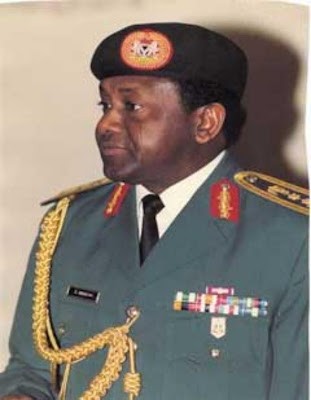 The last is yet to be heard about looted funds traced to ex- Head of State, Gen. Sani Abacha, as £20m(N5.12billion) laundered through some lawyers in Britain is being probed.

Two suspects, including a former Attorney-General of Kogi State, have been arrested in London in connection with the loot

The two suspects, who were trying to convert a 1994 CBN Traveller’s Cheque worth £2,000 at Travelex are undergoing interrogation in London.

Upon a search in the suspects’ hotel in London, it was gathered, about £78,000 traveller’s cheque was found on them.

There were indications that the UK Police may invoke the Mutual Legal Assistance to seek the extradition of Mohammed Sanni, who is allegedly linked to the probe.

A source said: “The arrest of two Nigerian suspects (including a former Attorney-General of Kogi State) has triggered the latest round of investigation.

“With the £20million loot in their care, they decided to test the waters with £80,000. So, the two suspects took £2,000 Traveller’s Cheque purchased by the CBN in 1994 to Travelex to get some cash but the desk officers were suspicious because of the time frame.

“The attendants alerted security agencies who arrested the suspects and later searched their hotel rooms where additional £78,000 worth of traveler’s cheque was found.

“The security agencies are working on the suspicion that the suspects were on a laundering mission in the UK as part of moves to repatriate the alleged £20million stashed by the late Head of State.”

The Press Bureau of the Metropolitan Police last night said: “We have contacted officers to get any details of this incident. We will reply in due course as and when we have them.”

The Abachas were alleged to have laundered about $3billion cash.

The Federal Government has so far recovered more than $2.550billion.

The government is trying to trace the whereabouts of $450million hidden in many countries.

A few months after the 13th year anniversary of Abacha’s death, the Federal Government recovered£22.5m (N6.18billion) loot which the late Head of State, allegedly stashed in Jersey.

The £20million being investigated is alleged to be part of the outstanding $450million.