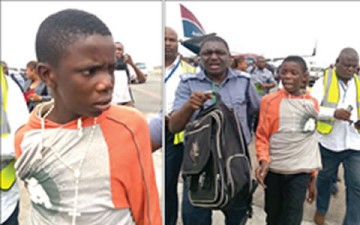 Daniel Ohikhena, the 13- year old kid who flew to Lagos in the tyre compartment of an Arik airplane has been released from the custody of the Directorate of Security Services.

He was released on Tuesday morning to officials of the Edo State Ministry of Women Affairs and Social Development.

His mother, Evelyn, was at the office of the DSS where she saw her son briefly and was informed on the processes her son would go through.

It was learnt that DSS explained to the mother why Daniel was detained.

The mother was later asked to go to the ministry for further briefing.

Evelyn said she has been inundated with phone calls since her son embarked on the journey.

It was gathered that the state government planned to send Daniel to a correctional facility.

Head of Social Welfare department, Imuetiyan Avielele, said they would carry out further interrogation of Daniel.

She was still at the ministry as at press time.