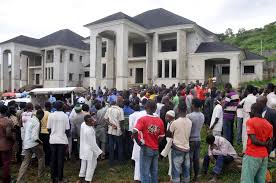 By all indications, Nigeria is going through very dire straits. Things are not normal in many aspects of our national life. Suspicion and mutual distrust among the various cleavages are at an all time high and exert tremendous influence on perceptions and actions. This is a sad commentary for a country that is about to mark 53years of independence in a couple of hours from now.

Under this circumstance, it is the minimum expectation that those in authority should be alive to extant sensibilities and refrain from actions that could give vent to blackmail, anger and frustration.

In an environment where people have been sensitized to think in very self-serving and particularistic manner, actions or inactions of public officers that should ordinarily have been given the benefit of doubt are subjected to very serious scrutiny. The overall aim is to find excuses to get even with perceived adversaries. That is what you find where people are aggrieved for one reason or the other. And it sums up the current mood of the country.

These sensibilities were evoked last week when officials of the State Security Services (SSS) announced their encounter with suspected Boko Haram members at an uncompleted building in the Apo area of Abuja in which nine of these suspects were killed and many injured. Deputy Director, Public Affairs of the SSS, Marilyn Ogar gave account of what transpired. According to her, some suspected Boko Haram members in their custody had disclosed that some arms were buried within the premises of the building which provided a meeting point for their members. Based on this information, a combined operation of the SSS and the Army stormed the building at night and as they were digging the ground for the arms, they came under the gun attack of the insurgents.

Their counter response led to the dead and injured. But this account has been disputed by some of the residents who said they are migrant workers and less-privileged people who paid some token to the security man in charge of the building to sleep there. They also claimed the owner of the building, said to be a military officer, had given them notice to quit the place and that the allegation was part of the plan to call a dog a bad name in order to hang it.

Expectedly, the turn of events has elicited resentment and anger from a large segment of the society. The feeling is that there seems to be more to the issue than ordinarily meets the eyes. There is the feeling that the account of the encounter presented by the SSS did not tie up. To add to this air of suspicion, the police have said they were not put on notice before the attack. Both the Senate and the Police have responded to this outcry by stepping up investigations to get at the root of the matter. But the SSS insists its account is a true representation of the matter. The Army also corroborates SSS account as its position on the matter. Ogar has made spirited efforts to persuade the public that the attack followed rules of engagement and the services stand to gain nothing by killing innocent people. She said their action was based on credible security reports at their disposal and would therefore want the public to believe their account of the circumstances of the encounter.

Ordinarily, there would have been the temptation to reason along with the SSS. This is more so as the service is not known to post shoddy records in handling issues of this nature. Again, the very sensitive and difficult nature of the fight against terrorism ought to count in their favour in resolving the misunderstanding arising from the incident.

Yet, there are issues that have been brought to the front burner by the killings that cannot be allowed to be swept under the carpet. And they account for the outcry.

Much of the suspicion is informed in part by the handling of the matter by the SSS both before the encounter and after the subsequent killings. There are yawning gaps to be filled. There are also questions to be answered. Though one cannot claim expertise in the rules of military warfare and strategy, there are commonsensical procedural flaws in the SSS account of the encounter. And much of the crisis of confidence they are now battling with, stem largely from these. The immediate impression one gets is that the first thing they did on getting to the building was to commence the digging of the ground for the arms their informant said were buried under ground. As they were digging the ground, they came under the gun fire of the terrorists and had to respond in self-defence culminating in the casualty figure.

Now, the searing posers: if the SSS and the Army detachment were detailed to hunt Boko Haram suspects in the building, what should constitute the standard entry behaviour on getting to their target? Is it not a standard safety rule that they should anticipate some resistance and prepare well ahead of time for that eventuality? This is more so when they had prior information that some arms were buried there. Should they not have cordoned off the area and then selectively commence arresting those they suspect to have links with Boko Haram? These questions arise because, the immediate impression we get from the SSS account is that as soon as the security agencies got to the site they commenced the digging of the ground for the supposedly buried arms. By this account, it was as they were digging that they came under the heavy gun fire of the insurgents and had to counter resulting to the killings. This account looks somewhat untidy and unprofessional. The minimum expectation is that all those living in the building should first have been under the safe custody of the security operatives. Having done that, the entire premises will then be searched before the digging to recover whatever arms were supposedly hidden there. Had this precautionary measure been adhered to, perhaps those who supposedly shot at the security operatives would have been apprehended earlier and disarmed. And where that proves difficult, the agencies would then consider maximum force such that led to the high death toll.

Again, the case of the SSS is not remedied by their inability to show evidence of the digging, the arms recovered and possible victims of the attack on their side. By just bandying claims without substantive evidence to corroborate them, they left room for the raging suspicion that has become the lot of the ill-fated encounter.

Matters are not helped by the testimonies of some of the injured. The allegation that the incident was a subterfuge to get the squatters out of the building since the owner had become uncomfortable with them is another issue. Even as the SSS would want us to resolve the doubts created by these lapses in their favour, it will be difficult to do so under the foregoing circumstances.

Admittedly, the war on terrorism is a very daunting and risky one that has cost the lives of security operatives and civilians alike. Even at that, no room should be left for doubts to creep into the enormous sacrifice that has been the fate of the war against terrorism. Neither should the fight constitute an alibi for extra judicial killings. It is a very critical and sensitive challenge that must be handled in the most professional manner. Boko Haram has some support from within. And no room should be given to these anarchists to ridicule the war against terror. The current probes must get at the root of the matter. It is in the overall good of the continuing struggles to tame the scourge.