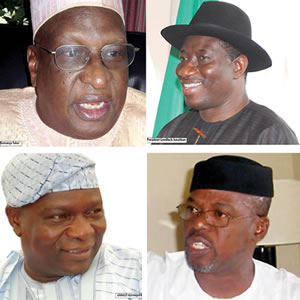 Democratic Party, PDP is in a nationwide free for all as entrenched factions dig in, with neither side having the capacity to give a knockout punch

By Emmanuel Aziken, Political Editor
Old things have passed away and the new PDP of Bayelsa is currently in charge of the State,” an associate of the immediate past governor of Bayelsa State, Chief Timipire Sylva boasted to some newsmen earlier this week as opponents of President Goodluck Jonathan pressed in embarrassingly in his home front.

The rebellion in the Peoples Democratic Party, PDP that started exactly two weeks ago, when six governors and former Vice President Atiku Abubakar walked out of the party’s special convention had this week turned into a phenomenal distraction to governance.

President Jonathan’s dithering procrastination on rejigging his cabinet was set aside as the president at the end of the normal Wednesday cabinet meeting sacked nine ministers. In all but two or three of the cases, those sacked were allegedly fired because of their relationships with the president’s enemies.

The paralysis in governance was not only in Abuja. The crisis has also forced many governors belonging to the party to take permanent abode in Abuja, the federal capital, and by that, undercutting the service to their constituents. Even more wrenching is the increasing apprehension that the seat of the federal government, the Aso Rock presidential villa may have been turned into an annex of the ruling party.

For most of this week, several dignitaries visited the presidential villa  for consultations with the president as the crisis in the PDP took centre stage in the polity. Erstwhile military president, Gen. Ibrahim Babangida who has not been known to have a face to face meeting with Jonathan since the fractious 2011 PDP presidential campaign primaries, called on the president last Tuesday as part of the peace emissaries. The meeting came ahead of the anxiously anticipated peace meeting between the old PDP or mainstream faction of the party and the Baraje led PDP in the presidential villa on Tuesday.

Remarkably, those who had been supposedly marginalized in the party, and had laid low took opportunity of the crisis to surface. In Bayelsa though those who came out to identify with the nPDP according to independent observers may not have the muscle to derail the fortunes of the mainstream party, yet it was an embarrassment for the local chapter of the party in the president’s backyard.

“The new PDP will resist and match up any attempt by the Alhaji Bamagar Tukur led faction to discredit it, as the Abubakar Baraje led National Working Committee of the PDP  stands for equity and fairness,” Comrade Esinte was quoted as saying.

Domestic foes of Governor Rabiu Kwankwanso of KanoState, one of the rebel seven governors, also saw the development as an opportunity for them to take over control of the party.

Several chieftains of the party including one time speaker of the House of Representatives, Alhaji Ghali Umar Na’abba, Nigeria’s incumbent ambassador to China, Alhaji Aminu Wali among others last Tuesday, stormed the national secretariat of the Bamanga Tukur led tendency of the party to upstage the Kwankwanso inclined state executive of the party in Kano.

The dignitaries who had been invited by Tukur were later disappointed as the presidency intervened to stop the coup. The intervention of the presidency was arguably informed by persuasions on the capacities of the Kano governor and his ‘troublesome’ Kwankwansiya movement in Kano.

It would be recalled that ahead of the 2011 elections,  some persons in the presidency had sought to take the party’s election ticket from Kwankwanso on the assumption that he could pose a threat in 2015. The ticket was, however, restored to him following security reports that doing otherwise could lead to a breakdown of security in the state.

Besides Kano, other states where the Tukur executive has threatened to dissolve the state executive of the party are Sokoto, Kwara and Jigawa which are all states in the sway of the nPDP led by Alhaji Kawu Baraje.

The threat of dissolution was only one weapon that was being used by the Tukur camp in the increasingly belligerent fierce conflict with the nPDP.

Last Monday, Tukur in a strategic move aimed at formally identifying his allies among the powerful state chairmen, summoned a meeting with the state chairmen from across the country.

Twenty chairmen turned out and pledged support to the embattled national chairman. Some chairmen who are known to be indifferent if not hostile to the nPDP, nevertheless stayed away as they point to Tukur as the major problem of the party.

While Tukur was using the leverage of his office to fight off his foes, the Baraje faction in a seeming determination to spoil his fun, was at the same time piling up its own arsenal for battle. At the beginning of the week, the faction unfolded a near complete complement of a national working committee, drawing extensively from Atiku Abubakar’s nationwide political structure, prominent among whom were Chief Chukwuemeka Eze (national publicity secretary) and Timi Frank (national youth leader).

Once Eze was named, he went into battle mood, castigating the Tukur led mainstream for posing obstacles to peace in the party.

Meanwhile, the Tuesday night peace meeting was said to have been inconclusive. Present on the side of President Jonathan were Chief Tony Anenih, the Chairman of the Board of Trustees, BoT and some governors including Godswill Akpabio, Akwa Ibom; Idris Wada, Kogi and Liyel Imoke of Cross River.

On the part of the nPDP were Governors Rotimi Amaechi (Rivers); Sule Lamido (Jigawa); Babangida Aliyu; and Aliyu Wammako (Sokoto).

In approaching the talks, both sides it seemed, were resigned to the fact that nothing fruitful would come out of it given the extreme position taken by both sides on the demand on Jonathan not to stand for re-election. In the end, discussion on that was deferred to the next scheduled meeting on Sunday.

The President, it was learnt, came into the meeting with a mindset of making peace with the warring governors but with the  notable exception of Governor Amaechi, seen by the president’s associates in the Niger Delta as a betrayer of their trust.

According to a source  privy to the deliberations, “The grievances of the governors were tabled and revisited one by one by all those at the meeting.

“When the issue of party structure in each of the affected states came up, the overriding interest of PDP was put into the consideration and the President and his team agreed that the authentic party structures should be restored in Adamawa and Kano states.

“As for RiversState, the President and his team advised all the parties to withdraw their suits in court to resolve  the matter.

“Although the President admitted that the suspension of Amaechi was illegal and the required 30 days had elapsed, everything was predicated on the resolution of disputes in court.

“There was suspicion by the G-7 governors that the Presidency came with a mindset to resolve issues except the crisis in Rivers. They are trying to isolate Amaechi to deal with him.

“Everybody has been wondering why the President’s body language was different on RiversState. Jonathan was non-committal on the solutions to Rivers crisis.”

Governor Amaechi was equally reported to have rejected entreaties from the President’s camp to step down as Chairman of the Nigeria Governors Forum, NGF.

Following the decision of both sides to reschedule the talks for tomorrow, Sunday, publicists of the warring parties went to town to give their own versions of  the talks.

Special Adviser to the President on Political Matters, Alhaji Ahmed Gulak described the demands of the nPDP governors as unconstitutional. Apparently referring to the quest of the governors that Jonathan should rule himself out of the 2015 contest, he submitted that it was an infringement on the President’s constitutional right.

Meanwhile, Eze, the firebrand national publicity secretary of  the nPDP in two major salvos on Wednesday, took on Tukur, flaying him as the impediment to peace in the party.

Noting the efforts of party elders to bring peace to the party and the alleged efforts by the Tukur tendency to derail them, Eze also cautioned the Tukur camp against alleged offensive remarks against some of the peace mediators, notably, former President Olusegun Obasanjo and Anenih. Appealing to the duo not to be deterred, Eze said:

“We plead with them not to be deterred by those who are feeding fat on the crisis as we are ready to assist them in any way possible to enable them restore peace to our great party.”

Also noting the belligerence of the Tukur led faction, he said:

“The latest of the belligerent actions by the Tukur faction is the ill-advised move  to take over the party’s structures in the States of the governors loyal to Baraje’s leadership. We wish to advise Tukur and his NWC against this or any other action capable of worsening the crisis. We say: ENOUGH IS ENOUGH!”

In a surprising twist apparently aimed at separating Jonathan from Tukur in the unfolding crisis, he said:

“Meanwhile, we wish to commend the Party Leader, President Goodluck Ebele Jonathan, and PDP Elders for their various efforts at resolving this crisis which, if allowed to continue, can only lead to the further weakening of our great party. We appeal to them never to  get tired until they achieve their set objectives. We also appeal to Alhaji Tukur and his NWC to respect these distinguished Party Elders and give peace a chance. The ball is in his court.

We have noticed the erroneous insinuation and propaganda by Tukur’s faction that the distinguished Statesman, General Olusegun Obasanjo, had a hand in our staging a walkout during the ill-conceived mini-convention of PDP and that he is the brain behind most of our activities.

We view this as disparagement on us, creating the impression that we are not matured enough to determine our political future and most importantly, it was as an attempt to smear the international image of General Obasanjo as a distinguished Statesman and father of PDP and rubbish his current efforts to restore peace to a party, the very existence of which is being threatened by the undemocratic acts of some of its leaders. We can now understand why Tukur’s faction is hell-bent on destroying every effort to bring peace to the party.

“We are also aware of the attempts being made to rubbish and ridicule the BOT Chairman, Chief Tony Anenih, for stating that we have genuine reasons for what we are doing. We want to assure Chief Anenih, knowing all his sacrifices and efforts in making PDP whatever it is by today, that we will not sit and watch some jokers in Tukur’s faction rubbish him or make him look ordinary in the affairs of  the party. The truth will always see us through.”

Reacting to assertions by Oyinlola that Tukur is a dictator, Okpala said: “Without equivocation, this statement is both laughable and ridiculous  for the world know the antecedents of Chief Oyinlola as a military  dictator and administrator, whose style of politics is at variance with  the current political dispensation in the country. “It  is a fact that Oyinlola was one  of those military punch who held  down our democracy for a long time.  As a former military man, Chief  Oyinlola is an unrepentant dictator of the first-order. “Under normal circumstance, he should not be heard to resort to platitudes or righteous pontifications on the ideals of democracy and  the rule of law. This is because by training and orientation, he is a  slave to Order and Command of the Military. He lacks any credible credentials to sermonize on democracy and due  process including rule of law.” With the ruling party engulfed in crisis, the opposition is not surprisingly ecstatic.

Governor Ibikunle Amosun of OgunState said as much this week when he said the opposition is praying for the problems in the PDP to continue so that the opposition could take over in 2015.