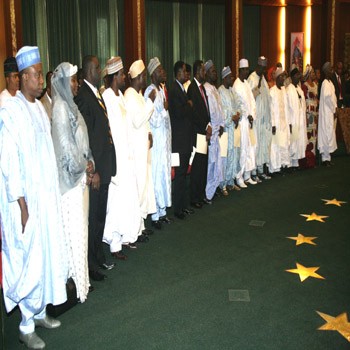 Good riddance! Be gone and fare thee well. This is what we all must say to the ministers fired from President Goodluck Jonathan’s cabinet on Wednesday. We hear some of them burst into tears, while they actually ought to jubilate and be grateful that they were relieved of a burden that was obviously breaking their weak backs. Many Nigerians had long expected this sack but Jonathan doodled apparently not quite understanding the essence of a cabinet. Many expected a near clean sweep; or something like 19, or even 39, for left to this column, only about three to half a dozen of the lot have shown that they can think through their responsibilities and deliver any result.

SELF-SERVING PRESIDENCY But by this cabinet change (if we must call it that), Jonathan has shown how pitiably mixed up he is in his bid to run a government and how he is not ‘working’ and his administration will continue to flounder even if he stayed a 100 years in office. Now he has sacked these fellows by the tag of ministers not because they were not up to speed on the job but because they will not serve his political purpose in the coming months. The pack of Ruqayyat Rufai, Okon Ewa-Bassey, Olugbenga Ashiru, Ama Pepple, Shamsudeen Usman, Hadiza Mailafia, Olusola Obada, Bukar Tijani and Zainab Kuchi have been marinated in the rich trappings of Jonathan’s presidential powers that often becomes Nigeria’s public office holders, in the past two or more years.

But what we call a cabinet here is a glorified royal court where the king’s men didn’t have to work or exert their minds; all they need do is to be ever present at the royal court, smile broadly at the king’s lame jokes to be acceptable in the king’s presence. Now this horde has become an irritant to the king and they are hereby thrown out like litter. This is the way our executive cabinets have worked at all levels since the British left these shores; members of the executive largely serve the boss and not the people. Now they have been sacked not because they have not performed in their duty posts but because they are deemed no longer useful to the boss man.

NO GRAND VISION President Jonathan fell deep into the same hole like all his predecessors. He picked underlings, party wags, personal aides, in-laws and mistresses of party big men to form a cabinet. Some had never held down a serious job in their lives and many who can never run a store were saddled with an entire ministry and accompanying agencies. Because neither the boss nor the messengers have any strategic vision for the job or the country, they end up destabilizing the system instead of adding or bringing any value to bear on it.

The result is that after four or even 20 years, the country would not be much different from how they met it. Our education for instance, would be in the doldrums and ASUU would continue to bicker; we will keep having a ministry of planning that cannot see beyond today and ministry in charge of housing that cannot manage to build a row of sheds in four years. Therefore, naught upon naught is naught; there is no grand vision, no overriding national interest being pursued and no strategic perspective brought to the job.

In this light it would be asking too much if we begin to question or interrogate the performances of these so-called ministers in the last two years. Safe to Gbenga Ashiru who managed to project some respectability in Nigeria’s foreign policy, most of the others (including those still on their seats) cannot be remembered for any positive contribution while they warmed their various seats. Prof. Rufai in the education ministry will be remembered for protracted ASUU strike and education policy that changed every session. She seemed always out of her depths while her upstart junior minister was rather illiterate for such most important job. Both the president and his appointees can’t seem to fathom the import and majesty of education in this age.

Mama Ama(l) Pepple, a retired civil servant, one would wager she doses half the time in office having segued from a lifetime of wearisome Nigerian bureaucracy into heading a ministry. One cannot remember that she delivered anything, not in housing, not in urban development in two years. Mrs. Obada was noticed cutting tapes here and there and that was all. Prof. Ewa-Bassey was neither seen nor heard anywhere and it would not have mattered if we did not have a ministry in charge of science and technology. Mrs. Mailafia manned one of the most important ministries in modern times but bet she did not realize just how critical issues of environment are in today’s world. She never lifted off the ground. Mrs Kuchi, the junior minister for power could not be expected to have put in any work if her senior counterpart was de-fenestrated and thrown out by the scruff of the neck; all one has for her is sympathy.

The same emotion I extend to Mr. Tijani, the junior for agriculture who must have been dazed by the bamboozling and bombastic razzmatazz of his senior man, Akinwunmi Adesina. Shamsudeen Usman who was in-charge of National Planning was particularly pathetic. He has been around as cabinet minister for nearly two decades under various governments and manning different ministries. All these years, one hardly remembers him for any performance on the job or freshness of thought; he is remembered as a time-server and bench warmer. This last outing however, completely unraveled the former bank chief. As the man in charge of National Planning, not one day did he give the nation nary a thread of insight about our condition yesterday, today or tomorrow. Worse, the vision 20-20-20 which was on his corridor died a natural death right their in his hands. In fact he carried on as if he was doing the rest of us a favour serving us in the executive council.

Beyond the sacked ones, most of the rest really ought to be chucked out if it was really all about service. Just a few instances: what on earth is Ms Omobola Johnson (Communications) doing there; what can we point to if she leaves today? Same for Prof. Onyebuchi Chukwu (Health), one cannot see any imprint or monument. Labaran Maku has not brought anything to his office apart from the odium of a ministerial visit (we remember him for something at least); Goodsday Orubebe (Niger Delta ministry) has nothing to offer, same for Onolememen (Works). Akinwunmi Adesina is all fancy foot works with neither depth nor results and ditto for Olusegun Aganga who has lived a fantasy world of phantom investors.

Apart from one or two, this cabinet and its leadership have been a debacle, to say it straight. Let’s be rid of them!