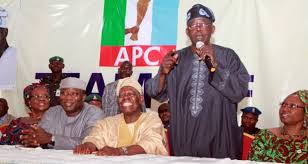 Blind loyalty and selective amnesia are two big problems militating against the progress of Nigeria, we accept people without questioning them and when we are forced to question we tend to (deliberately) forget the important questions about their pasts because we like and want them in a position.

There is a popular saying that “the devil you know is better than an unknown angel” this statement remained true until PDP spent 14years in power without really changing our lives or Nigeria. So it’s safer to say now that the unknown angel is what we really want in Nigeria, we want an escape route from the grasp of PDP and their devilish ways of administration, since the party came into power in 1999, there has not really been many changes we can point to or any policy aimed at bettering the lives of ordinary Nigerians, rather they create selfish policies to enrich themselves at the expense of ordinary Nigerians.

Many Nigerians hate the PDP with a strong passion, we want the party out by all means in 2015, the APC is the party some of us are routing for but we must be careful and “APC with caution”

Like I wrote earlier that right now we are ready to accept the unknown angels, unfortunately APC is neither unknown nor are they angels, we can refer to them as the lesser devil, not as big as the PDP but not really different because we are yet to test them with federal treasury but we know what those of them that have been tested with state treasury did and how they became more than a thousand times wealthier than they were before assuming power.

The APC is made up of politicians who have been in power before either at state or federal level, each and every one of them with pasts not better than that of PDP members; Nigerians should not allow our hatred for the PDP blind us from the obvious. Yes ACN/APC governors are trying but in a normal society and with the money they get, if we are sincere and not limit ourselves to the mentality of expecting little or nothing from elected officers, AD/AC/ACN/CPC/APC and PDP since 1999 have all performed below expectation, neither care for the poor and given the opportunity they’ve all looted, none is corruption free and have been in many controversies.

We want an end to PDP, APC seems to be the only solution presently but we can’t just accept APC because we hate PDP, we must ask them questions; how does the APC seek to be different from what we are used to? Are they only using us to get to power or it wants ordinary Nigerians in its fold? they must convince us why they deserve our votes, we need to be assured that they want to serve us not rule over us like monarchs, we need to have their words that we won’t be imposed on like it is done in Lagos, APC need to show us how they hope to fix Nigeria, they must realize that they can only change Nigeria if and only if they act differently and bring fresh ideas.

The APC can boast of having governors who are working hard to fix their different states but can they say the same about their Senators and Reps? How will the party deal with human rights / constitutional rights infringement that is gradually becoming the order in Nigeria and why none of the serving APC Senators or Reps never thought of sponsoring a bill to cut the jumbo salaries and bonuses they receive and spend the money on infrastructures.

Ousting the PDP is not enough, we can’t afford to replace bad with worse, we must “APC with caution”, we can’t afford to suffer the same fate we suffered with GEJ, APC must give us the details of how they will curb all the excesses of PDP, we don’t want then to tell us what we want to hear, we won’t fall for that again, they should tell us in details how they will turn around the fortunes of this ailing nation.