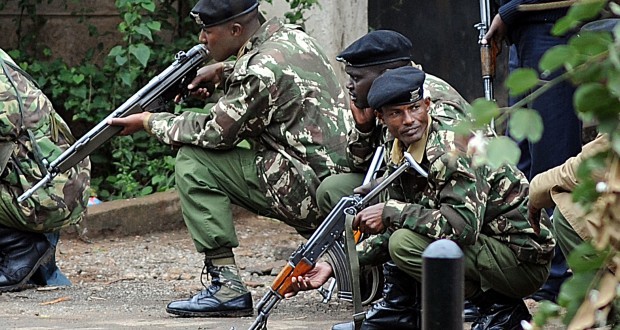 Kenyan security forces have launched an assault on the Westgate shopping complex in the capital Nairobi in an attempt to break the three-day siege.

Sporadic gunfire is continuing at the mall, where suspected al-Shabab militants remain holed up.

The Kenya Defence Forces said three “terrorists” had been killed and all escape routes sealed off, with troops now focusing on clearing the building.

The official death toll stands at 62 and more than 170 have been injured. Prominent Ghanaian poet Kofi Awonoor died in the atatck. He was in Nairobi for a literary event.

The Somali Islamist al-Shabab movement has said it carried out the attack in retaliation for Kenyan military operations in Somalia.

A number of countries are believed to have offered assistance to the Kenyan authorities currently dealing with the siege at the Westgate Mall.

Kenya is seen as a largely pro-Western country in a strategically important continent that is facing growing instability from the threat of Islamic extremism.

Kenya has also been a target for Western interests in the past – most notably the 1998 attack on the US embassy in Nairobi carried out by al-Qaeda.

However, at present, Kenya’s forces are taking the lead in the hostage crisis. If there is any involvement by foreign nations it’s likely to be in a purely advisory role. It has already been reported that Israeli “security specialists” are on the ground in Nairobi giving advice, though it has not officially been confirmed.

Even if foreign forces are giving advice or even more, the Kenyan authorities are unlikely to want to give the impression that they can not deal with this crisis themselves.

There were earlier reports of sustained gunfire and dozens of Kenyan troops were seen crossing the road into the Westgate centre, from where a thick plume of black smoke was billowing.

The Kenyan security forces (KDF) said the fire had been started by “terrorists to distract the ongoing operation”, and that the blaze was being managed by firefighters.

It said 10 bodies had been retrieved from the building in the last 24 hours. More than 200 civilians have been rescued, 65 of whom remain in hospital.

The KDF said 11 of its soldiers had been injured during the stand-off.

The Interior Ministry warned said in a tweet: “We are pleading with you, #WestGateMall is a scene of crime. For your own safety keep off that area. Roads leading there have been cordoned.”

Security has also been stepped up at entrance and exit points across the country, with “more than 10 individuals” arrested in relation to the attack, the ministry said.