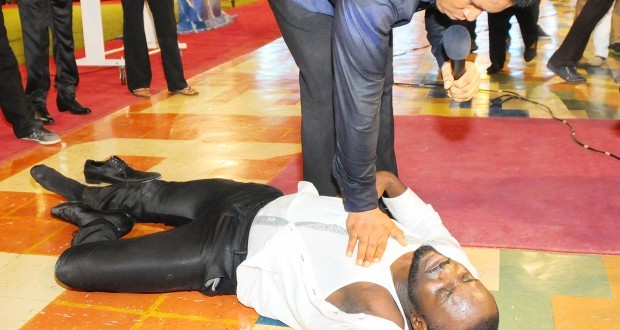 It was not clear what the mission of Nollywood actor, James Ikechukwu Esemougha, popularly called Jim Iyke was at the popular Synagogue Church, located in Ikotun, a suburb of Lagos, but a two-minute video on the church’s website shows the actor struggling with several officers of Pastor TB Joshua, the head of the church, as they fought to keep him still.

A facebook post and video subtitling on the incident revealed that the actor, who is famous for the ‘bad boy’ movie roles, was on Sunday being delivered of perceived negative spirit that has prevented him from getting married.

The energetic prayer session soon got the thespian sprawling on the floor, after falling several times, and shouting incoherent words. “What do you guys want from me,” asked the actor, apparently recovering from frenzy. “Take it easy, the man of God will like to see you after the service,” replied one of the church ministers, as the led the actor away from the middle of the congregation, looking bevildered.

Effort to reach the actor on his encounter is still ongoing.