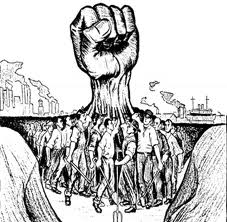 “I do believe that, where there is only a choice between cowardice and violence, I would advise violence…I would rather have India resort to arms in order to defend her honour than that she should, in a cowardly manner, become or remain a helpless witness to her own dishonour.” – Mahatma Gandhi

“Between the anvil of united mass action and the hammer of the armed struggle we shall crush apartheid and white minority racist rule.” – Nelson Mandela

“For the sake of clarity, let me stress that there is no peaceful revolution, there is no bloodless revolution, because when you take to the streets, it is your blood or their blood, it is their head or your head; it is their victory or yours.” – Ogunjimi James Taiwo

It is common to hear people chanting the slogans: “Be the change you wish to see in the world”, “Change will not come if we wait for some other person; we are the change that we seek…”, “everyone thinks of changing the world, no one thinks of changing himself.” etc, when trying to stress the need for a supposed inward change or inward revolution, before the outer one.

Before I go too far in this write-up, may I please stress it that this article will stoke no one’s ego, will offer apologies to no one, will be free in the use of languages and slogans and will attack relentlessly, beliefs and established notions that have kept the mass of the people continually subjugated and satisfied with living a reserved and horrible lifestyle. Religions, political institutions, ethnic and tribal beliefs that have over time aided and abetted oppression will not be spared.

That said, the concept of change is perhaps one that has been misinterpreted by people whose aims are to continually keep people under and to feed them with the illusion of change. Slogans, tags, chants are sponsored by these elements to give people their own dose of the change tablet. But any discerning mind will understand that in the history of social change and overturning of governments, nowhere has it happened that a change that augurs well with people in power has ever been a lasting change or been a change that the mass of the people desire.

We listen as people relentlessly tell us that the world has evolved from times of taking to the streets to demand for legitimate rights, we listen as they tell us that we don’t need a violent revolution, that what we need is a peaceful revolution, a bloodless revolution. I then ask, what is your definition of a peaceful revolution? A revolution where you all take to Freedom Park and listen to music from morning to Evening? A revolution where you take to the streets singing Solidarity songs while your comrades get felled by the oppressors’ bullets? What exactly is your definition of peaceful revolution? The advocates of a bloodless revolution forget that it does not matter whether you are for peace, once you decide to go against their wishes by trouping to the streets, you make yourself an enemy, a target and a potential corpse; it becomes a case of kill or be killed.

You see, when I look around and try to fathom reasons why people refuse to believe in a revolutionary process that involves ‘trouble’, I discover that it is either out of cowardice or out of ignorance. How do you explain to me the need for a continuous peace on the part of the masses while the government chooses the path of violence? How do you relate the fact that people choose to sing songs in protest rather than unitedly confront the enemy. I posit that blacks in America may still remain in the same condition they were then if they had stood by the singing of Rev. Martin Luther King’s “We shall overcome”. Were it not for the understanding of Malcolm X in deciphering the needed solution to the Negro’s problem, blacks may still be singing the “We shall overcome” song till today and still remain in bondage.

The truth is; no government gives a damn if you want to sing your life away. Hell! They can even provide you with platform to mount your instruments, provide you with microphones and even get you tom-tom when you sing yourself hoarse; they only begin to listen when they see a collective resolve that cannot be shaken even by the guns and whips of the government forces.

So many people have different reasons for ‘hating’ a ‘bloody’ revolution, some hide under the guise of religion, others plead that they’ve seen too much bloodshed that they never pray to experience another. I am not a warmonger, far from it. But I am a man who likes to face facts. I am a man, who has studied the political situation clearly and seen that the problem of this nation is so enormous that a recycling of political parties won’t solve it, only a total overturn and pulling down of the current system can guarantee a total and lasting change.

I do not begrudge those who believe in peaceful revolutions; I do not hate them; I am a strong believer in the philosophy of the late Fela Kuti, who sang that, “One day you self go agree with me, to dey act the way as you dey feel. Remember if you no act your own. One day of course we must die.” We can’t all come to the realisation that only a total upturn of the current system can bring about real change at the same time. Some people will come to that realisation when they lose friends, family and loved ones to the trigger-happy security operatives. Others will reach that conclusion when they expect to find justice in courts and they can’t find it. Others will attain that realisation when they work all their lives only to see their pension and gratuity embezzled by a group of pen-robbers. And others will reach the realisation when they sit by the bedside of loved ones in the hospitals and watch them die a slow and painful death because those in power refuse to provide good health plan. Others will realise it when they hear of loved ones dying in accidents due to the death traps called roads. But one thing is sure; we will all come to that realisation.

For now, I’ll not discuss the issues of religious institutions, traditional rulers and cultural establishments in the subjugation process. But in my next article, I shall do justice to these too and seek to dispel the notions that have continually kept us down and robbed the mass of the people of their thirst for change.