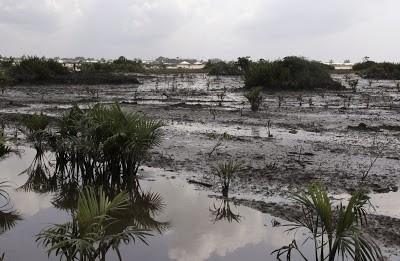 About 11,000 fishermen and others from Bodo community, Gokana Local Government Area of Rivers, who lost incomes when a pipeline belonging to shell burst in 2008 have rejected a £30 million (about N7.5 billion) or around £1,100 compensation offer for each person affected by the oil spill.

Martyn Day, a partner with the UK law firm Leigh Day who represented the Bodo people during the negotiation, told British newspaper, The Guardian that Shell’s offer was rejected unanimously at a large public meeting in Bodo.

“The amount offered for most claimants equated to two to three years’ net lost earnings whereas the Bodo creek has already been out of action for five years and it may well be another 20-25 before it is up and running properly again. I was not at all surprised to see the community walked out of the talks once they heard what Shell were offering.”

Day said Bodo people unanimously rejected the compensation calling it “an insult”, “cruel” and “derisory”.
With the rejection of the compensation offer, a London court is now likely to decide how much the giant Anglo-Dutch company should pay 11,000 fishermen and others from the Bodo community who lost their income when the 50-year-old Shell-operated Trans Niger pipeline burst twice within a few months in 2008-09.

Shell, which took a top London negotiating team including a barrister, a QC and other legal experts to the negotiations, had indicated that it wanted to be fair, saying: “We have an interest in sensible and fair compensation being paid quickly to those who have been genuinely impacted by these highly regrettable spills.”

A spokesman said: “We took part in this week’s settlement negotiations with two objectives – to make a generous offer of compensation to those who have suffered hardship as a result of the two highly regrettable operational spills in 2008, and to make progress in relation to clean-up.”

The company said it was disappointing that no agreement had been reached on compensation, but progress had been made in discussions about the clean-up process. Shell, which works in a partnership with the Nigerian government, had maintained that it had not been able to clean up the spills because the affected Ogoniland communities had insisted on getting compensation first and would not allow it access to the affected areas.

The spokesman told The Guardian: “Of course, the success of any interim measures and final remediation depends on the cessation of oil theft and illegal refining in the area, which re-impacts the environment and remains the cause of most oil pollution in the Niger delta.”

Philip Mshelbila, Shell Nigeria’s head of communications, said: “One positive from the talks is that the Bodo community has indicated that the clean-up needs to start as soon as possible. I understand that an offer was put. We are very willing to take part in talks about the clean-up.”

“Shell continues to treat the people of Bodo with the same contempt as they did from the start when they tried in 2009 to buy us off by offering the community the total sum of £4,000 to settle the claims,” said Chief Kogbara, chairman of the Bodo council .

“We told them in 2009 the people of Bodo are a proud and fiercely determined community. Our habitat and income have been destroyed by Shell oil. The claim against Shell will not resolve until they recognise this and pay us fully and fairly for what they have done,” Kogbara added.

Chief Tal Kottee, Bodo elected regent, said: “We had been expecting a good settlement from Shell. Our livelihoods here have been totally destroyed. It’s an outrage that it has taken so long for a clean-up and to get compensation.”

Chief Patrick Porobunu, leader of a Bodo fishing community, said: “Shell is cruel, very wicked. It has given us nothing again. People here are very angry. All we have is poverty because of Shell. We have no electricity, no health. Our suffering goes on.”

International and regional groups condemned Shell, which is the largest company on the London stock exchange with a market capitalisation of £140.9bn, for what they called its “meanness”.
Groups accused Shell of financial racism and applying different standards to clean-ups in Nigeria compared with the rest of the world.

“Is it because we are Nigerian and poor that they offer so little for the damage they have caused?” said one fisherman at the Bodo meeting. “This would be different in the US or London.”

“Crude oil is the same in every country. Does the black man not also have red blood?” said another.

“It is a big shame on Shell that they are unwilling to pay a fraction of their profit as compensation after subjecting the people and the environment to such unthinkable harm they would not dare allow in their home country,” said the Nigerian environmentalist and chair of Oilwatch International, Nnimmo Bassey.