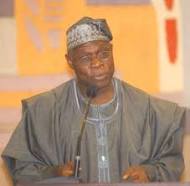 There must be a mix-up somewhere. In 1984, Nobel Laureate, Wole Soyinka dismissed his generation as a ‘wasted generation’. Soyinka, in a scathing essay in The Punch entitled ‘The Wasted Generation’ examined Nigeria’s historical travails and concluded, in a damning sentence: “After a quarter of a century of witnessing and occasionally participating in varied aspects of social struggle in all their shifting tempi, dimensions, pragmatic and sometimes even ideologically oriented goals, I feel at this moment that I can only describe my generation as the wasted generation, frustrated by forces which are readily recognisable, which can be understood and analysed but which nevertheless have succeeded in defying whatever weapons such ‘understanding’ has been able to muster towards their defeat.”

Another eminent Nigerian, Prof Chinua Achebe, had said Nigeria’s problem was basically leadership. Achebe declared, in The Trouble with Nigeria, published in 1983, that “the trouble with Nigeria is simply and squarely a problem of leadership” and of the inability or unwillingness of leaders to rise to “the challenge of personal example.”

Both Achebe and Soyinka had refused national honours in protest against the decadence in the country and the caricature of a nation that Nigeria had become under various despotic regimes. These are the hallmarks of great men. In Nigeria, all kinds of characters usually end up on the national honours lists. So, many men of honour and proven integrity must be weary of wearing the same emblems as the unworthy characters who sometimes populate the lists.

“It is sad that after 53 years of independence, we have no leader that we can commend. The problem in Africa is that when one person takes over, he would not see any good thing that his predecessor did. Let us condemn but with caution,” the former president was quoted as saying by the online news medium, Premium Times.

Trust the former president; he also seized the opportunity to sing his usual song of self-glorification: “In 1979, we had 20 new ships specially built for Nigeria. When I came back 20 years after, the national shipping line had liquidated”. He was talking about his first time as military head of state and 1999 when he returned as civilian president. Has he forgotten too that the government he handed over to in 1979 was as inept and corrupt as it could be and in less than four years, that government had done sufficient damage to the economy and other sectors of the economy. That begot the dictatorship of General Muhammadu Buhari, then Ibrahim Babangida, Sani Abacha before General Abdulsalami Abubakar came and organised elections that threw up the Obasanjo government in May, 1999. So, what did Obasanjo expect the scenario to look like in the circumstance?

Characteristically, the former president was economical with the truth when he said he did not want to hand over to his former vice president, Alhaji Atiku Abubakar because he (Atiku) was a betrayer. “I wanted someone who would succeed me, so I took Atiku. Within a year, I started seeing the type of man Atiku is. And you want me to get him there?” Does Chief Obasanjo think we have forgotten that Abubakar was content with being governor in his Adamawa State when Obasanjo approached him to be his deputy? Has Obasanjo forgotten too how he reportedly cringed before this same Abubakar to get his party nomination for second term? Worse still, if Obasanjo, despite his experience in government (at least he had been head of state in the ’70s) could have a faulty sense of judgement in choosing his deputy, what right has he to lampoon the so-called younger generation for incompetence in leadership positions?

But can we really blame Chief Obasanjo for giving us these homilies? I do not think so; rather, it is his colleagues and others who have been running Africa aground that are still honouring him with invitations to deliver lectures, oversee elections and stuff like that who are still giving him a false sense of importance. Even at the summit on leadership failure in Africa in question where the former President gave the keynote address, he was the least competent to speak on the issue. We remember the many illegalities that were committed during his regime. We saw how governors were impeached without quorum; a thing his political godson experimented in Rivers State with the speaker of the state house of assembly; we saw how he (Obasanjo) used the anti-corruption agency, the Economic and Financial Crimes Commission (EFCC) to haunt his enemies. There are too many buts about his administration that we can’t go on counting. Yet, his colleagues keep calling him to deliver lectures and monitor elections, a question of birds of the same feather flocking together?

But it is one slave that makes one abuse many other slaves. The truth is that there is no correlation between age and leadership. Obasanjo, at least officially, was born on March 5, 1937. He is therefore 76 years old. Achebe was born November 16, 1930. He died March 21, aged 82. Soyinka on his part was born July 13, 1934, which means he is 79 this year. Officially, therefore, Obasanjo is the youngest of the trio. Much as we can say that Obasanjo cannot be said to have given Nigerians good leadership, both Soyinka and Achebe are renowned worldwide. How it is only the wrong people that get into leadership positions in Nigeria is what one cannot fathom.

Chief Obasanjo should not be deceived that because he owns a leadership forum, then he is eminently qualified to mount the pulpit to pontificate on leadership, whether in Nigeria, worse still, in Africa. It is just one of the many contradictions of the man, Olusegun Obasanjo. In better run societies, no one would touch his forum, not even with a long spoon. His sermons can only make sense if he tells us to do as he says and not necessarily as he does- born again only above, but steep in the world down below! Another contradiction?