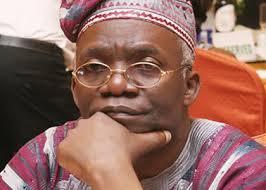 It is common knowledge that the beautification project of the Babatunde Fashola Administration has led to the “deportation” of hundreds of the jetsam and the flotsam from Lagos State to their states of origin. The elite and the media have been celebrating the ban on “Okada” from the major roads and the removal of traders and area boys from the streets. For understandable reasons, most of the hundreds of thousands of poor people who have been displaced and dislodged in the operation “keep Lagos clean” are of the Yoruba extraction.

It is sad to note that most Nigerians never took cognisance of the war being waged by state governments against the poor and disadvantaged citizens in the urban renewal policy until the much-publicised case of the 14 beggars of Anambra State origin who were “deported” in Lagos and dumped in Onitsha about three weeks ago. In fact, it was the condemnation of the “deportation” by the Governor of Anambra State, Mr. Peter Obi, that drew the attention of the elite to the unfortunate development. However, in defence of its action, the Lagos State Government stated that it entered into an agreement with the Anambra State Government through its liaison office in Lagos on the controversial “deportation”.

Although the Anambra State government has not denied the allegation that it was privy to the “deportation” of the 14 beggars, it is on record that in December 2011, the Peter Obi administration had “deported” 29 beggars to their states of origin i.e. Akwa Ibom and Ebonyi States. Apart from such official hypocrisy, the Obi regime did not deem it fit to protest when the Abia State government purged its civil service of  “non-indigenes” in 2012. Many of the victims of the unjust policy who hail from Anambra State were left in the lurch.

In June 2011, the Federal Capital Territory (FCT) government “deported” 129 beggars to their respective states of origin. In May 2013, hundreds of beggars were also removed from the streets and expelled from Abuja. Of course, it is common knowledge that the FCT authorities have continued to demolish residential houses without following due process in order to “restore the masterplan of Abuja” which was distorted through corruption and abuse of office. The majority of the victims of such illegal demolitions who are poor have been dislocated and forced out of FCT.

Last week, the Rivers State government removed 113 Nigerians from the streets of Port Harcourt and “deported” them to their states of origin. The Akwa Ibom State government has just contacted its Lagos counterpart of the planned “deportation” of two “mad” Lagosians roaming the streets of Uyo. Many other state governments are busy “deporting” beggars, mad men and other destitute in the on-going beautification of state capitals. Those who are defending the Igbo beggars out of sheer ethnic irredentism should be advised to examine the socio-economic implications of the anti-people’s urbanisation policy being implemented by the federal and state governments in the overall interests of the masses.

Since “deportation” has been resuscitated under the current political dispensation, it has become pertinent to examine the legal implications of the forcible “deportation” of a group of citizens on account of their impecunious status. Although street trading and begging have been banned in some states, it is submitted, without any fear of contradiction, that there is no existing law in Nigeria which has empowered the federal and state governments to “deport” any group of Nigerian citizens to their states of origin.

Accordingly, the forcible removal of beggars from their chosen abode and repatriation to their states of origin are illegal and unconstitutional as they violate the fundamental rights of such citizens enshrined in the Constitution of the Federal Republic of Nigeria, 1999 as amended. In particular, “deportation” is an affront to the human rights of the beggars to dignity of their persons (Section 34), personal liberty (Section 35), freedom of movement (Section 41), and right of residence in any part of Nigeria (Section 43).

Furthermore, the “deportation” of beggars and other poor people by the federal and state governments is a repudiation of section 15 of the Constitution, which has imposed a duty on the state to promote national integration. Since the political objective of the state imposes a duty on the governments to “secure full residence rights for every citizen in all parts of the Federation” it is illegal to remove poor people from the streets of state capitals without providing them with alternative accommodation. By targeting beggars and the destitute and “deporting” them to their states of origin, the state governments involved are violating Section 42 of the Constitution, which has outlawed discrimination on the basis of place of birth or state of origin.

In so far as Article 2 of the African Charter on Human and Peoples Rights (Ratification and Enforcement) Act (Cap A9) Laws of the Federation of Nigeria, 2004 has specifically banned discriminatory treatment on the ground of “social origin, fortune, birth or other status”, it is indefensible to subject any group of citizens to harassment on account of their economic status. An urban renewal policy that has provision for only the rich cannot be justified under Article 13 of the African Charter, which provides that every citizen shall have equal access to the public services of the country.

In the celebrated case of the Minister of Internal Affairs v. Alhaji Shugaba Abdulraham Darma (1982) 3 N.C.L.R. 915, the Court of Appeal upheld the verdict of the Borno State High Court which had held that the “deportation” of the respondent (Alhaji Shugaba) from Nigeria to Chad by the Federal Government constituted “a violation of his fundamental rights to personal liberty, privacy and freedom to move freely throughout Nigeria.” In the Director, State Security Service v. Olisa Agbakoba (1999) 3 NWLR (PT 595) 314 at 356 the Supreme Court reiterated that “It is not in dispute that the Constitution gives to the Nigerian citizen the right to move freely throughout Nigeria and to reside in any part thereof.”

Since “deportation” has denied the victims the fundamental right to move freely and reside in any state of their choice, it is illegal and unconstitutional. It is indubitably clear that the fundamental human rights guaranteed by the Constitution and the African Charter Act are not for the exclusive preserve of the bourgeoisie but for the enjoyment of all Nigerian citizens including beggars and other economically marginalised people. To that extent, no state governments has the power to “deport” or enter into agreements to repatriate any group of citizens to their states of origin.

It ought to be made clear to the managers of the neo-colonial state that there is no country which promotes social inequality that has successfully outlawed the poor from existence. This explains why beggars are found in large numbers on the streets of major cities and in the ghettos of the United States of America – the bastion of capitalism. The situation is bound to be worse in the periphery of capitalism like Nigeria where the poverty rate has reached an alarming proportion due to the failure of the state to provide for the welfare and security of the people, which is the primary purpose of government.

The federal and state governments should also be made to realise at all times that beggars are Nigerian citizens who lack money, food and other basic facilities to live decent lives. The authorities should stop stigmatising and harassing them and other citizens who have been pushed to a state of penury by the gross mismanagement of the economy by a selfish and short-sighted ruling class. A nation that complains of inadequate funds to establish a social security scheme for the majority of the people allowed a cartel of fuel importers to corner $16 billion while oil thieves stole crude oil worth $7 billion on the high seas in 2011 alone.

Yet the influential oil thieves and pirates are walking free on the streets of our state capitals without any official harassment. Others who engage in unprecedented corruption, fraud and other financial and economic crimes have never been “deported” to their states of origin. It is high time the government was restrained from holding the poor vicariously liable for the crisis of underdevelopment of the country. Therefore, part of the billions of naira being earmarked to build mega cities should be set aside for the rehabilitation of beggars and the destitute.

There is no doubt that Lagos State is put under severe pressure, from time to time, by millions of Nigerians who have been economically displaced in their own states of origin. But unlike its counterparts, the Lagos State government has devised effective strategies to compel the rich to pay taxes through their noses. In addition, the monthly statutory allocation of the state from the federation account is partly based on its population. In the circumstance, the Lagos State government should take from the rich to service the poor. As in the case of most of the “area boys” who have been productively engaged by the Fashola administration the Lagos State government should formulate programmes for the rehabilitation and resettlement of beggars and the other destitute to make them contribute to the economy of the state

In his inaugural address on January 20, 1961, the United States President, Mr. J.F. Kennedy, warned: “If a free society cannot help the many who are poor, it cannot save the few who are rich”. About 40 years later, those cautionary words resonated in the case of Hoffman v. South African Airways (2001) CHR 329 at 354 where Justice Ngcobo of the Constitutional Court of South Africa stated: “Our Constitution protects the weak, the marginalise, the socially outcast and the victims of prejudice and stereotyping. It is only when these groups are protected that we can be secured that our own rights are protected.”

With respect to the implementation of neo-liberal policies that have continued to pauperise our people, I am compelled to remind the ruling class in Nigeria of the plea made by the Late Dr. Akinola Aguda in 1985 that “our new perspective in law and justice must be such as to guarantee to each of our people food, drink, lodging, clothing, education and employment in addition to the rights guaranteed to him so far by our Constitution and our laws, so that justice may mean the same thing to everyone.”