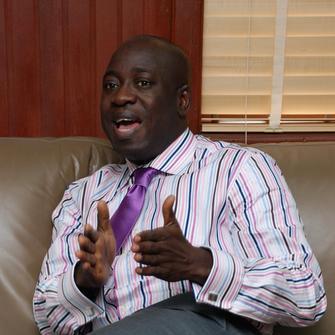 Sports Minister Bolaji Abdullahi has changed the face of our football significantly, with the uncanny manner in which he has resolved some knotty issues.

He demystified FIFA, which had in the past being threatening Nigeria for government interference. A visit to Zurich and fruitful jaw-jaw sessions with Joseph Blatter and his lieutenants served as the platform for Abdullahi to understand and interpret FIFA’s tenets to avoid violations. We are no longer being threatened. There is stability. I wonder where all the court cases have gone.

Abdullahi’s unbiased intervention in the crises-ridden Nigeria Football Federation (NFF) is chiefly responsible for Nigeria’s symbolic victory at the 2013 Africa Cup of Nations. All the noise made by Super Eagles players and the coaches amount to hot air because Nigeria has fielded stronger teams than the wiry squad we took to South Africa in January. Those wobbling and fumbling Eagles failed because the NFF was a divided house unlike what happened in South Africa.

Those who hold contrary opinion to the fact that Abdullahi’s crafty handling of the NFF wahala contributed to the new dawn in the Eagles must tell this writer why the team couldn’t beat Kenya in Calabar? That was the team’s first game as African champions, yet the Eagles almost lost because the football fraternity was divided.

But the issue today bothers on the far-reaching decisions being peddled in the media by the probe panel constituted to find out the circumstances surrounding the bonus show-of-shame in Namibia, where the Eagles and officials refused to board the aircraft to South Africa en route Sao Paulo, Brazil for the 2013 Confederations Cup.

We are being told that the players would have to choose between signing the code of conduct to remain in the team or quit, if they decide otherwise. What a brilliant decision by the panel. We are blessed with talents, but we should cultivate the habit of grooming young boys in the nurseries or academies, as we have chosen to call them here. Is there any club in Europe without a code of conduct?

Recall in 1996 how Super Eagles players were anxious to participate in the Africa Cup of Nations, which the late head of State Gen. Sani Abacha stopped Nigeria from attending due to political differences.

I recall how the players were ready to storm South Africa from their bases in Europe to circumvent the late Abacha’s directives. So, who says that the players don’t need Nigeria to blossom?

Playing for Nigeria is nobody’s birthright. Any player lucky to be selected should consider it as a privilege and must be prepared to abide by the directives. This code of conduct exists in all the clubs where our players earn a living. No one has refused to sign it. Why then would anyone refuse to sign ours? How many players in the present Eagles started playing in Europe without passing through our national teams?

The decision to peg the match bonus at $5,000 is welcome. Is it not a shame that our players want to be paid $10,000 for beating a team whose winning bonus is $85 each? If we pay $10,000 to beat minnows, how much shall we pay to pip big soccer nations, such as Brazil, Germany, Spain, Italy, France, Holland etc? Shouldn’t there be a difference between what is paid as bonuses for qualifiers and the main tournament? Is this not what operates in their European clubs? Or would anyone of them say that what he earns as bonus for the domestic games is equivalent to what he gets for European competitions, such as UEFA Champions League, Europa Cup etc? Why must they now hold us hostage over bonuses?

It is heartwarming to read that eggheads of the Nigeria Football Federation (NFF) have been warned not to increase the bonuses from what has been stipulated. I just hope that subsequent sports ministers don’t play politics with the bonus issue by arbitrarily increasing it to score cheap praise.

The talk by many that NFF takes along a horde of people is bunkum. NFF men dare not spend cash not budgeted for; otherwise, they will visit the EFCC cell. You need to see the retinue of hangers-on who accompany our leaders on trips within the country not to talk about overseas? Most times these other people are part of the Federal Government delegations. And it is not unique to Nigeria. What this translates to is that cash is provided for this group while outside the country.

I like the suggestion that the players should apologise to Nigerians for the show-of-shame in Namibia. I look forward to other decisions, which will be advisory, but I hope that NFF and, indeed, the National Sports Commission (NSC) will stick with the panel’s recommendations. We don’t want a repeat of what happened in Windhoek.

I wish I had access to Blessing Okagbare for 10 minutes. I will tell her to stick with the long jump. I will urge her to concentrate on running the 200 metres, if she insists on participating in the women sprint events.

Okagbare is a slow starter, like Usian Bolt. But, unlike Bolt, who has the capacity to catch up over a short distance, Okagbare needs at least 150 metres to outrun the pack. Over a short distance as the 100 meters, Okagbare gives up easily, especially if the eventual winner has zipped past the 50 metres mark.

What is clear to discerning minds is that Okagbare can never win the 100 metres race in major international meets, except the smaller competitions, even though she has the potentials to do so. Those who win the big races have their schedules guided by their countries’ governments, making the lure for smaller races unattractive. The advantage in this strategy is that when they appear in any small meet, if the need arises, their events are staged at their behest.

This is the missing link in Okagbare’s case, making it imperative for her to earn a living by running all through the year.

I know that the Athletics Federation of Nigeria (AFN) and the National Sports Commission (NSC), as well as Minister Abdullahi have done their best for her, yet the Federal Government must make Okagbare a brand that the corporate world should tag to.

I will suggest that a presidential night with Jonathan be organised, where the President will sell her as a Nigerian project, first to next year’s Commonwealth Games and then the 2016 Olympic Games in Brazil.

At the presidential night, the President will advise the blue chip companies to invest in her and indeed other athletes. The President will also announce what these supportive firms will benefit from such an exercise.

This presidential night could also be used by the President to reinvent the sports lottery project. But it should be held yearly, with the designated committees give account of their stewardship. Where they are found wanting, a new body is set up and the defaulters are made to face the wrath of the law.

Okagbare needs help beyond the little that Governor Emmanuel Uduaghan is giving. In America and Jamaica, Okagbare will be treated like the Super Eagles.

I look forward to the day when Okagbare will win a big race. On that day, the world will be still for a few minutes, listening to our national anthem. Then the corporate giants will paint the picture of Okagbare in Nigeria’s colours on their products. Let them imagine watching her on television loosing up before taking her turn in the long jump, wearing warmers inscribed with their corporate logos.

To stretch the argument further, let firms capture the setting where Okagbare emerges as the fastest woman in the world, wearing logos of their firms and talking to CNN, BBC, Al Jazeera etc on 30-minute shows. The marketing window on their products and/ or services is awesome. Not forgetting front page pictures in all the big newspapers.

Such support will compel Okagbare to shun those small races that burn her out for the bigger ones. Need I say more?