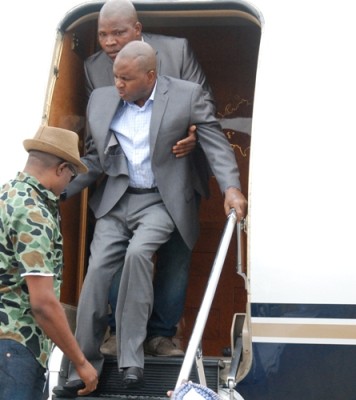 ‘Leadership is a privilege to better the lives of others. It is not an opportunity to satisfy personal greed.’
————Mwai Kibaki

Presumably, Benjamin Disraeli had the Taraba State of Nigeria’s situation in mind when he muttered his instructive aphorism: ‘Circumstances are beyond human control, but our conduct is in our own power.’ Disraeli, in February 1868, got his first shot as Prime Minister of Britain when Prime Minister Lord Derby became too ill to hold office. Derby voluntarily relinquished power to him, though Disraeli’s concluding term was brief because a new election voted out the Conservative Party in December of that year. However as far back as one and half century ago, the situation that played out then in Britain is playing out in our own country today as Disraeli’s dictum clearly captures the recalcitrant posture of obviously ailing Governor Danbaba Suntai. Unlike Lord Derby who voluntarily relinquished power at the peak of his ill-health, Suntai obstinately holds on to power despite his visible ill-health

The consequences of Suntai’s action when he went outside his governorship duties to pilot a chopper is beyond his control but his subsequent conducts of forcing his retention of power since his return from overseas medical treatment, though within his power, bear manifestations of an over-kill. His questionable medical status points in this regard. The man piloted a plane that crashed near Yola, Adamawa State on October 25, 2012. He was rushed abroad for medical treatment where he spent 10 months in Germany and United States so that he could get healed of the injuries he sustained during that misadventure. But the questions are: Is this professional pharmacist-turned-politician now fully healed of the injuries? Is he now fit to take over the mantle of leadership of Taraba State from Alhaji Garba Umar, his deputy and acting governor, while he was away?

This last question in particular seems belated in view of recent developments. Ailing Suntai, according to Hon. Joseph Albasu, Taraba House Majority Leader, had sent a letter he purportedly signed to intimate the honourable members of his readiness to resume work. But the House, from media reports, is divided on the issue. Albasu gave the governor the go-ahead without the Speaker and political head of the hallowed chamber, Haruna Tsokwa’s consent. Albasu, from the comfort of his office, even swore that Suntai was more than ready for work.

What is laughable is that the majority leader, without the benefit of a verifiable medical certificate, certified Suntai physically and mentally fit to govern. This was the same Suntai beamed to the entire world where he was helped out of the aircraft by two hefty men and who till now has not deemed it fit to appear in any public place except through a brief doctored television address to the people that fervently prayed for him during his medical travails abroad. It is perhaps a sign of ingratitude for him not to physically appear, if only once in public, to dispel insinuations by doubting Thomasses, including yours sincerely, that believe that he is infirm and does not possess the mental wherewithal to rule that state again.

From the avalanche of media reports from that state, the people are truly apprehensive that a certain cabal, like it happened during the inglorious handling of the medical situation of late President Umaru Yar’Adua, have taken over the levers of power in Taraba State. How long can they sustain this game of political perfidy is yet to be seen. If only they were good students of history, they would thread softly. After all, history repeats itself simply because people refused to learn from it – apologies to the great philosopher/thinker, Aristotle.

The retinue of power bootlickers singing sweet nonsense into Suntai’s ears will leave his wife and children in the cold should anything bad happens to him – God forbid. They would jump into the ship of the next man after him because whatever they tell him now regarding his continuing to rule, even when he does not have the medical capability, is in their own selfish interests and nothing more. Where is the so-called cabal that compellingly ensured that YarÁdua died in power? Perhaps, the man would still be alive today but for the strain of that coveted office. What happened to Turai, wife of late YarÁdua and her children may not be too far from his doorstep except his wife plays the wise one by telling these people to leave her husband alone for him to have time to attend to her obviously fragile medical situation. Performance in office has nothing to do with human frailties; it is about bowing to nature when the demand arises.

Suntai needs everybody’s help and prayers. Why are our politicians’ turning slaves to their tall dreams only to end up as pitiable objects of regrets? Their immoderate pursuits of power are wantonly dangerous, yet, alluring to them. They willingly circumvent the constitution, giving it interpretation that is a function of power and not truth. Yet, the people share the larger blame because without us (the people that the constitution vested with sovereign power), they could not have been as powerful as we make out of them. Through our fault, the value systems of those with access to power and of those of us far removed from such access have not always been the same. Power and position, unfortunately, attract more of evil than good to the holders. That is what is happening to Suntai at the moment. The earlier the wife, the man and other dependants realise this bitter truth, the better for them – and more importantly, for democracy in the state and Nigeria in general. Slavery to power must end in all parts of the country.