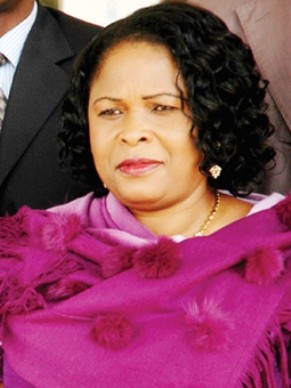 It had been a long day.

The Lady of the Rock had just emerged from the Situation Room where officials had been summoned to brief her on the latest intelligence from Rivers State and the struggle for survival of its beleaguered governor, Chibuike Rotimi Amaechi.

Earlier, senior representatives from the security and intelligence services had given her a detailed briefing, a battle plan actually, on her latest project: a national rally in Abuja to “sensitise” Nigerian women to the Federal Government’s epochal achievements in the areas of peace and women empowerment.

She was about to settle down to a late afternoon snack of fresh-baked cassava bread and steaming fish pepper soup fortified with orisirisi when the AfDB’s searing report on the Nigerian economy bobbed up on the large television screen in the room that serves as her private study.

“A-f-D-B.” She called out the letters slowly and deliberately, with more than a hint of disdain. “Wetin’ be dat one again?”

“African Dèvèlopement Bank,” Your Excellency, one of six personal assistants waiting on her volunteered with a deep curtsey.

Her Excellency had every right to be miffed. A month had scarcely passed since she was presented with the International Telecommunication Union’s Online Child Protection Award, in Geneva, Switzerland. Now, the ITU is one of world’s oldest international organisations, going back to 1869.

That award recognising Nigeria’s leadership role in protecting children – the leaders of tomorrow — from the snares of cyberspace where anything goes was fundamentally an award honouring Nigeria’s commitment to development in the finest sense of the term.

And yet, the so-called AfDB, an ordinary regional body funded in large part by Nigeria, has the temerity to issue an adverse report on the Nigerian economy and even contradict facts and figures that the responsible officials have painstakingly complied and dutifully checked?

What, indeed, is the world coming to?

Does the official who signed that contumacious report not know that Her Excellency could by a mere clearing of the throat get him deported, regardless of his diplomatic status? Or get the AfDB expelled from these shores? Or, for that matter, cause Nigeria to end its membership in the organisation and the financial support that constitutes such a large chunk of its operating funds?

But on this day, she was exceedingly agreeable.

The briefing on preparations for the National Rally for Peace and Women Empowerment, conducted by top officials from the National Security Agency and the armed services, had gone very well. The logistics had been worked out to the minutest detail. Nothing was being left to chance. All those who had been ranting that there were no clues at the top and no vision would be put to shame big-time.

The rally, it has to be said at the outset, was a triumph of planning, organisation, and execution. Abuja is like a basket; it leaks at every point. Yet, the rally took even long-time residents of the town by surprise. They had no idea it was coming. Neither did Boko Haram.

Withal, it must be accounted an astonishing feat that tens of thousands f women from all 36 states and the Federal Capital Territory were outfitted, flown or bused to Abuja and housed in suitable lodgings without disruption to air travel and inter-state road transportation, without straining the city’s resources, and without attracting undue attention from the usual interlopers.

And when it was staged last Thursday, the rally was quite a spectacle. Abuja had never seen anything like that. As a matter of fact, no city in Nigeria has ever seen anything like it. The recent week-long siege on Port Harcourt did not even come close. Someone who follows such matters closely tells me that we would have to go back to Romania, in the time of Nicolae Ceausescu and his wife, Elena, to find a modern precedent.

Thisday’s terse, summative headline captured it best: “Residents Groan as First Lady’s Rally Shuts down Abuja.” The city finally got a taste of what the Lady of the Rock had worked up in Lagos, Makurdi, Lokoja and Port Harcourt, to name just some of the cities she has favoured with a visitation.

All approaches to the venue, Eagle Square, were blocked to vehicular traffic. Hundreds of residents heading to the adjacent Federal Secretariat to resume work were reduced to sulking in impotent rage in their cars, immobilised, according to one account, by “stern-looking and gun-toting” men who had descended on the venue before dawn.

Hundreds upon hundreds upon hundreds of empowered women clad in dresses bearing a portrait of President Goodluck Jonathan in black on a yellow background marched in close military formation to express gratitude to the man who had changed their fortunes, not forgetting the woman – I take that back: the Lady — behind him.

Women in the armed services were not left out. Decked out in their official uniforms, women soldiers and police officers imparted to the march past the military precision their civilian sisters could not muster. You could see gratitude for their empowerment and a deep yearning for peace written not only on their faces but across their well-starched uniforms.

So as not to be left out of the great occasion, women security operatives shed, at least in part, their accustomed anonymity. They wore tight black masks that covered just about the entire face except their eyes, nostrils, and mouths. In itself, that spectacle bespoke awesome power. It is frightening to think of what it would convey when the operatives are empowered all over again.

Easily the most awesome demonstration of power on that day of power, however, was taking place in the skies above the parade ground, where a squadron of fighter jets streaked overhead, with orders to interdict, neutralise, or destroy any would-be saboteurs. Boko Haram finally got the message. It could pre-empt the National Day parade, but it cannot mess with the First Lady’s Rally for Peace and Empowerment.

Meanwhile, on the ground, The First Lady looked on serenely from a covered stand and beamed with benevolent satisfaction as the empowered women in their tens of thousands marched past. First ladies from several African countries invited to the rally watched in awe and envy.

I am told that a debate is now raging in the usual circles as to whether the terms “First Lady” and “Firstladyism” adequately depict the current Nigerian reality, and whether it would not be much more helpful to replace them, respectively, with “Maximum First Lady” and “Extreme Firstladyism.”

In whatever case, the word from that corner is: You ain’t seen nothing yet.