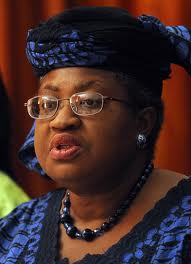 The first thing I have to say is that we have a central bank that is autonomous and it is the best practice to make these decisions.  We may not be happy about it and I am bold to say we are not happy about high interest rates!  As I said before, it is tough for our entrepreneurs to function.  Even before the withdrawal of this liquidity, they were already charging over 20 per cent interest rates and I think that is alarming.  …we need to interrogate why.  Structurally, what is the issue?  And we are not willing to ask our banks that question.  So, as the minister of finance, I have been very concerned about that.  Even if the monetary policy rate (MPR) is 12 per cent, inflation is coming and there is no reason for the rise.  It is too high!  Why are real interest rates in the Nigerian economy so high?  Deposit rates are extremely low and Nigerian savers are earning as low as five per cent and three per cent.  But they are giving certain segments high deposit rates.

“…But the fact that we are leaving the banks as we are running a free market system does not mean that you have to have this kind of behaviour.  Private sector credit has gone down.  I plan to have a meeting with the banking sector operators to really understand what is going on.

“That is why we are really going to set up the development bank.  I am not trying to bash them (banks), but I am puzzled as to why.  I think there is a structural problem within the banks and our banking system and their pricing.

The above is an excerpt of the Finance and the Coordinating Minister of the Economy, Dr. Ngozi Okonjo-Iweala’s responses, to a ThisDay newspaper editorial team on the seemingly intractable challenge of high interest rates and conversely extremely low rates for deposits.

Hereafter, we will briefly discuss Dr. Iweala’s comments on the presumed sanctity of Central Bank autonomy and her belated concern with the dysfunctional interest rate structure; thereafter, we shall comment on the credibility of our current free market system, and the Minister’s proposed solution of a development bank.

It may indeed be best practice for a country’s Central Bank to enjoy autonomy in formulating and executing strategies and decisions that would sustain price stability (i.e. low cost of funds, minimal inflation and appropriately priced currency).  Nonetheless, the monetary policy directions of Central Banks and the fiscal policy objectives of the Executive branch of government must be in harmony to avoid conflict in the product of their respective actions; for example, the high interest rates currently induced by CBN’s policies deflate the real sector and challenge government’s expectation for industrial and agricultural expansion to promote increasing job opportunities, and by extension, improve social welfare, while it simultaneously increases our debt burden in spite of minimal infrastructural impact.

This realisation of the stifled objectives of government led to Dr. Iweala’s above lamentations!  Regrettably, the enabling 2007 CBN Act does not finely define parameters for judging acceptable level of price stability; consequently, the CBN could still claim that it has successfully maintained stability, even when interest and inflation rates remain ‘stable’ at such high rates that cannot successfully drive economic growth.

The finance minister also expressed her consternation at the huge gap between high lending and very low deposit rates.  Instructively, however, best practice interest rate structure will never be attainable with the ever-present burden of surplus cash or excess liquidity in the system.

Consequently, any viable strategy must attack the root cause of systemic surplus cash, which curiously does not translate to liberal availability of cheap credit to the real sector!!  In spite of the distractive serial arguments to the contrary, undoubtedly, such surplus cash evolves, whenever the CBN substitutes naira allocations for dollar-derived revenue.  This singular factor poisons successful management of the economy, as it instigates the odd reality of government borrowing back its own funds from banks and also crowding out the real sector from available credit.  Indeed, the excess funds fuel inflation and also facilitate ample opportunities for corruption.  In fact, Dr. Iweala needs no further search for the structural problem within the banks or the cog in our economic wheel of progress!

In addition, excess naira supply instigates downward pressure on the naira, especially when we earn increasing dollar revenue.  Worse still, a weaker naira increases fuel subsidy and may pose a threat to subsidy-free tariff in the power sector.

Incidentally, some critics may observe that before the 2007 CBN Act, which consolidated CBN’s powers, cost of funds hovered between 17 and 20 per cent (still very high rates) throughout the finance minister’s first term in office, but there is little evidence that she did anything about it, when there were no constitutional constraints!  Nevertheless, Dr. Okonjo-Iweala’s intended meeting with banking sector operators will certainly be meaningless, if the root cause of surplus cash is not addressed.

The option of creating a development bank suggested by the minister may actually turn out to be a wasteful duplication of the functions of the existing Bank of Industry (BOI).  Furthermore, the creation of selective low interest rate by fiat for such a bank and CBN’s tight control of 80 per cent of forex supply may also not be compliant with Dr. Iweala’s support for a truly free market system!

Advisedly, BOI funding should be heavily supplemented to increase its territorial spread and ensure that cost of funds and other ancillary charges do not exceed seven per cent cumulatively in place of the prevailing oppressive cumulative charges above 20 per cent, which was recently decried by manufacturers.  Furthermore, in line with best practice in successful economies elsewhere, agriculture loans should not exceed two per cent also cumulatively.

Instructively, Dr. Iweala’s dilemma on the conflicting results of economic strategies will be resolved once the CBN cuts the umbilical cord that feeds the money market with excess cash by stopping its usual capture of monthly dollar revenue and substituting same with bloated naira sums!