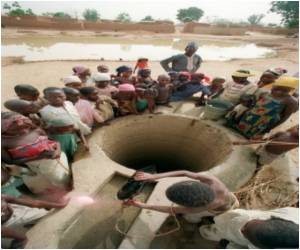 This story often gladdens me and, at the same time, angers me. There is a community called Birnin Ruwa in Zamfara State, which used to be afflicted with the cholera epidemic every year. A dozen persons were always guaranteed to die with each outbreak, which was an annual event. Those who know Northern Nigeria very well will understand why. Denied of potable water, rural communities depend on water from streams to cook, wash and bathe. Unfortunately, during rainy seasons, the streams are easily polluted. With human and animal wastes perching on the banks, it takes a few drops of rain to defile the water. Pit latrines also overflow after heavy rainfall. Cholera outbreaks are inevitable. Every year, hundreds of people die from the epidemic. You can almost be sure.

What gladdened my heart about this story? It took just one public-spirited person to tackle the epidemic in Birnin Ruwa. All he did was fork out N200,000 to sink a hand-pumped borehole. The poor people could now drink clean water – in and out of rainy season. “That was the end of cholera-related deaths in that community,” Malam Imam Imam, former THISDAY correspondent in Zamfara and now spokesman to the Speaker of the House of Representatives, told me some years ago. Can you believe that with just N200,000, a dozen guaranteed deaths could be prevented? What angered me, and still angers me, is that N200,000 is a piece of cake for our politicians. They could spend that to just polish a pair of shoes when they should be saving lives.

Only God knows how much public funds Northern governors spend every month going on “lesser Hajj” while lesser mortals continue to die from preventable and treatable diseases. As five PDP governors chartered private jets and started flying from Port Harcourt to Abeokuta to Minna to Abuja to Yola to “rescue democracy”, all I was just calculating in my head was the number of boreholes the money could have sunk and how many lives that could save. (Pardon me: I am always thinking and talking about boreholes and potholes.) To be clear, I am not saying people should not go for lesser Hajj as long as it is not treated as official trip. Also, I am not blaming Northern governors alone for wasteful spending. It is prevalent in nearly every state of the federation. I wish someone could help me calculate how much our governors and ministers have burnt on chartering jets for useless political meetings this year alone. It would be mind-blowing. Yet there are so many things crying for attention, but politicking is their priority.

Isn’t it a shame that some of the most meaningful and effective interventions in the welfare of Nigerians are not initiated or funded by government? When we are talking about malaria, cholera, safe motherhood and several matters with critical impact on the people, it is amazing that foreign donors and non-governmental organisations exude more commitment and tenacity than the political actors. While politicians typically play politics with “free healthcare” just to tick the box, the experience of those who visit public hospitals for treatment is not usually exciting. The poor are condemned to neglect and deprivation. We need to be a little bit ashamed of ourselves that it is taking foreign or individual intervention to achieve measurable results in the fight against poverty and disease in our land.

For instance, the UK Department for International Development (DfID) spends millions of pounds every year supporting different causes in Nigeria, and they can measure the results better than the different levels of government. One of the projects DfID has consistently funded for nearly 10 years now is the Health Reform Foundation of Nigeria (HERFON), a national membership organisation advocating better health for all Nigerians through the health sector reform (HSR) which has recorded significant progress. HERFON, headed by Dr Muhammed Mustapha Lecky, former Executive Secretary of the National Health Insurance Scheme (NHIS), has worked actively in different states of the federation on malaria control, reproductive health, increased health budget and safe motherhood.

HERFON, which started as the Change Agent Programme (CAP) in 2001, is engaged in advocacy and capacity building, focusing mainly on health systems, immunisation and HIV/AIDS. It has reportedly trained over 200 change agents to make reform sustainable in Nigeria and Nigeria-owned. Working hand-in-hand with the Federal Ministry of Health and states to reform the health sector, HERFON lays claim to several successful initiatives including helping with the resuscitation of the polio vaccination in the North after all the hiccups caused by a suspicion that it was designed by the United States to sterilise young Muslim girls in order to reduce the population of Muslims.

The organisation has also been involved in the strengthening and supporting of primary health care systems in Yobe, Katsina, Nasarawa, Ogun, Bayelsa and Ebonyi and is currently implementing the organisation of management training programmes for the improvement of management manpower and capacity in the health sector. Working with other non-governmental organisations committed to improving healthcare delivery in Nigeria, DfID can be satisfied that it has impacted a lot on the welfare of Nigerians and that its funds are not wasted. We cannot say the same about the trillions of naira we throw at problems without much to celebrate beyond political propaganda.

I find it very difficult to understand the psyche of government officials when it comes to spending public funds. I would like to know, for example, how much of public money is spent on foreign trips every year and what results those trips achieved that could not have been attained without junketing. Most of our attention is usually on the Federal Government, especially Presidency. We hardly scrutinise what states and councils waste on frivolous items in a country where a N200,000 borehole can prevent a dozen cholera-induced deaths. I would be interested in knowing the practical impact of the projects government claims to have spent huge budgets on. The basic reason government exists is to provide for the security and welfare of its citizens. When it now takes public-spirited individuals or NGOs to provide water, rehabilitate public schools and provide security, then you have to question what we need government for in the first place.

If N200,000 can save so many lives, if NGOs like HERFON could impact so much on the healthcare system, if foreign donors could show so much commitment to fighting poverty and disease in Nigeria, then our political actors should talk themselves and work out a better way of reducing wasteful spending and directing the funds to what will make life better for poor Nigerians. Everybody will be happy for it.