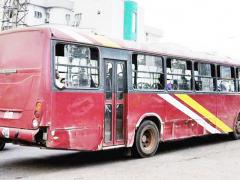 Not many are aware of the clandestine sale of over 100 Marcopolo buses purchased by the administration of Nasir el-Rufai, as Minister of the Federal Capital Territory (FCT) in 2005.

The order to dispose of the buses, Abuja Metro gathered, was given by the FCT Minister, Senator Bala Mohammed, as the company responsible for management of the scheme directly reports to him.

Abuja Metro found from investigation that out of the 192 buses purchased by el-Rufai’s administration at the cost of N3.2 billion from Brazil (an outrageous cost of N17 million each), less than 10 per cent of that amount has been recovered from the secret sale of the buses by Abuja Urban Mass Transport Co. Ltd. (AUMTCO), headed by Abdulrazaq Oniyangi.

AUMTCO, Abuja Metro can report authoritatively, receives direct instructions from the FCT Minister and doesn’t fall under the supervision of the Transport Secretariat. We gathered that the decision to dispose of the buses was solely taken by the FCT Minister’s office and the office cited poor management and poor state of the buses as reason for the disposal.

AUMTCO was established in 2005 by el-Rufai to provide mass transport services to FCT residents but today, it’s just the skeleton that is left after el-Rufai’s exit in 2007.

AUMTCO was introduced at the wake of the ban on commercial motorcycle operations, popularly called okada, and was also meant to replace hundreds of rickety buses that plied major routes in the city.

In a chat with Abuja Metro, the Managing Director and Chief Executive Officer of AUMTCO, Abdulrazaq Oniyangi, claimed that due process was followed in the sale of the buses. Although the FCT administration gave us no evidence to back its claim, Oniyangi claimed that advertorials were published in two national newspapers, announcing the disposal of the buses, which he described as old and rickety.

“We auctioned 100 buses that have been de-commissioned,” he noted. “Most of them were in very critical conditions and we had to dispose of them.”

He, however, failed to confirm or deny claims that the buses were sold for as low as N1 million. “I can’t tell you how much each of the buses was sold. I was not a member of the committee. I don’t even think the members of the committee will want to disclose how much each of the buses was sold. We made a public announcement in two national dailies and people tendered their bids for the buses. It wasn’t done in secret,” said Oniyangi.

Abuja Metro had got information that some of the buses were sold at ridiculously low prices to people close to the administration, while the reason most of the buses were banished to the junk yard were not more than bad tyres or batteries.

Some major hotels in Abuja were the buyers as many keyed into the bonanza to grab the cheap buses. Although most of the buses were in good working conditions at the time they were disposed of, many residents and stakeholders have therefore cast doubt on the real motive the buses were discreetly sold out.

Some of the sold buses bought by operators of the new transport scheme in the FCT have been refurbished and are plying Abuja roads. Our sources further alleged that beneficiaries of the bazaar sale took the buses to an automobile plant in the South East where they were refurbished and brought back to Abuja as individual transport operators.

Our sources gave details of how three successive FCT ministers after the exit of el-Rufai blanked out the scheme starting with Aliyu Modibbo, Adamu Aliero and present administrator Bala Mohammed. They allegedly stopped the funding of AUMTCO and thereby stopped the company from operation.

Similar to some policy reversals of el-Rufai, the buses were not maintained as required and the money realised from the business wasn’t enough to keep them running as the fare charged was not commensurate with the realities of the day.

“I don’t really know why they did what they did, but their actions are responsible for the collapse of that transport scheme. What el-Rufai did was laudable and actually reduced the sufferings of FCT residents. As soon as Modibbo took over, he abandoned the primary responsibility of developing the FCT, reversed most of the policies in place when he came.

“Modibbo refused to fund the operation of AUMTCO and the decline of the company actually started then. When Aliero took over, he continued with Modibbo’s tradition in the refusal to fund the transport company. Mohammed’s years actually sent the buses to funeral undertakers. It is surprising that buses purchased eight years ago and were still working could be sold at such prices,” our source recalled.

Due to lack of supervision on the part of the management of AUMTCO, many of the buses are uncounted for and no serious disciplinary action has been taken. The same source confided in Abuja Metro that due to lack of supervision, drivers of some the buses connived with security men in the yard where the buses are parked and left with some of them. “As I speak to you, the FCT administration and the AUMTCO cannot account for some of the buses. The drivers of the buses in connivance with the security men at the yard and some officials of AUMTCO have stolen some of them.

“As at the last count, more than 20 of the buses couldn’t be accounted for and no arrests have been made or anyone sacked over this. My fear and the fear of many FCT stakeholders is that this new transport scheme introduced by Senator Mohammed might suffer similar abandonment when a new minister takes over. If the incumbent minister could abandon the good work of his predecessor, the same would be the case when he leaves office,” the source added.

When contacted, the media aid to Senator Bala, Nosike Ogbuenyi refused to comment. He said he wasn’t privy to the details of the sale of the buses.